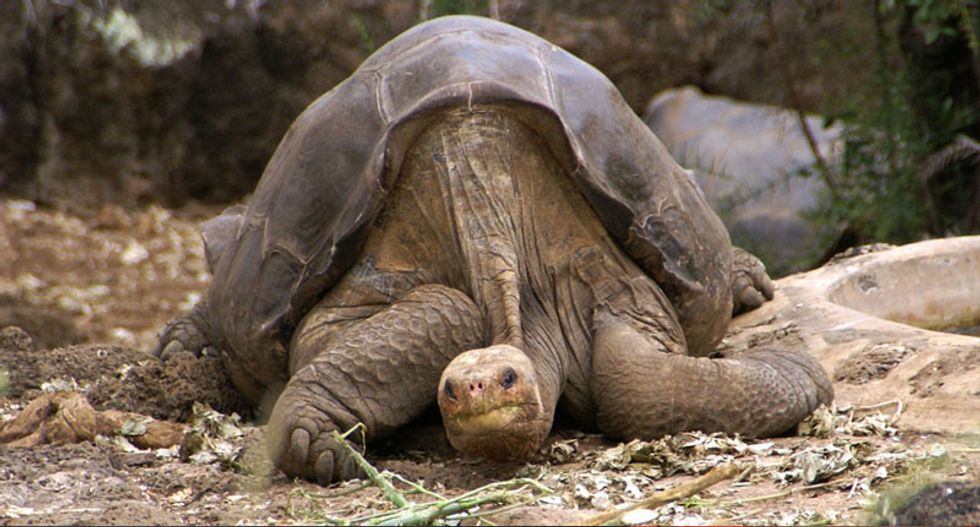 The Galápagos Islands, 1,000 kilometres off the coast of South America, are probably most famous as the place that inspired Charles Darwin’s theory of evolution. They are home to an extraordinary array of wildlife, including giant Galápagos tortoises, the world’s largest land-living cold-blooded animals.

The tortoises once thrived in the archipelago. There were originally 15 species that evolved as the islands formed volcanically. However, since the arrival of people four species have become extinct.

A few weeks ago we returned from an expedition to the islands in search of two of these extinct species of tortoises. It may sound like a fool’s errand, but our expedition was a success.

Here’s how we did it.

The Galápagos Islands were colonised in the late 1800s. A combination of poaching by whalers and pirates, and introduced pests competing for food and eating eggs and hatchlings, led to tortoises being exterminated on some islands, and dramatically reduced on others.

Darwin wrote about the harvesting of the species of tortoise found only on Floreana Island (Chelonoidis elephantopus), which was exterminated within 15 years of his visit to the Galápagos in 1835.

The tortoise found only on Pinta Island (Chelonoidis abingdoni) went formally extinct in 2012, when its last representative, a male held in captivity and nicknamed Lonesome George, died. He was a major conservation icon and at one point considered by Guinness World Records as the world’s rarest living creature.

The Galápagos Islands, showing locations mentioned in this story.

Ten years ago our genetic research program made a very surprising discovery. Some tortoises on Volcano Wolf, on Isabela Island, didn’t match others normally found on the volcano (Chelonoidis becki). Instead, their DNA matched that of the extinct species from Floreana and Pinta.

These exciting discoveries led to an expedition on Volcano Wolf in 2008, where we tagged and sampled over 1,600 tortoises. DNA analyses revealed an astonishingly large number of tortoises with mixed genetic ancestry in this sample: 89 with DNA from Floreana and 17 with DNA from Pinta.

How was this possible?

It is likely that people have been moving tortoises around the islands. Old logbooks from the whaling industry indicate that, in order to lighten the burden of their ships, whalers and pirates dropped large numbers of tortoises in Banks Bay, near Volcano Wolf.

These animals were collected from lower altitudes islands (Floreana and Pinta) during centuries of exploitation by whalers and pirates, who made the archipelago a regular stop-off for their crews to stock up on these handy living larders.

Many of these tortoises made it to shore and eventually mated with the native Volcano Wolf species, producing hybrids that still maintain the distinctive saddleback shell found in the species from Floreana and Pinta. These hybrids include animals whose parents represent purebred individuals of the two extinct species.

Our recent expedition was aimed at finding the animals with a high proportion of ancestors from Floreana or Pinta.

It was ambitious, logistically complex, and very strenuous.

Our team of park rangers, scientists, and veterinarians from 10 countries were divided in nine groups of three to four people each. The daily mission included patrolling large areas of unstable razor-sharp lava fields and of spiny thick vegetation across Volcano Wolf, the tallest of the Galápagos. Added to this ordeal were the frequent encounters with wasps, the equatorial heat, and an El Niño induced six-day period of non-stop rain.

When one of the target tortoises was found, we would contact our mother ship by radio and clear the vegetation of the volcano slopes to make room for the cargo net of our expedition’s helicopter. The precious tortoise would then be moved into the net and airlifted to the ship, which was anchored in Banks Bay.

Our teams discovered more than 1,300 tortoises, including nearly 200 that potentially have mixed ancestry from Floreana or Pinta. We airlifted 32 of them to the ship and then to the captive breeding facility of the Galápagos National Park on the island of Santa Cruz.

Included in the 32 were four females with Floreana genes and one male and one female from Pinta that were tagged and analysed in 2008.

The DNA of these tortoises will be analysed to inform the best breeding strategy. We want to restore as much as possible the genes originally found on Floreana and Pinta.

The captive-born offspring of the two extinct species are expected to be released in their native islands within the next five to ten years.

Reintroduction of these tortoises to the islands where they evolved, together with large-scale habitat restoration efforts, is essential for the restoration of the island ecosystems. These long-lived large herbivores act as “ecosystem engineers”, altering the habitat they live in to the benefit of other species.

For instance, the Volcano Alcedo tortoise population, arguably the largest in the Galápagos, is derived from a single female lineage thought to have survived a catastrophic volcano eruption in pre-historical times.

The reintroduction of over 1,500 captive-born offspring of the species once found on Española Island is another success story. The repatriated Española population, all derived from 15 captive breeders, now seems well-established.

Bringing back the Floreana and Pinta species from extinction, something inconceivable not long ago, is now a possibility. Its appeal is further increased by the fact that our expedition found that many more tortoises with genes from Floreana and Pinta still wander on the slopes of the Volcano Wolf. Adding them to breeding programs will boost the genetic diversity in the released individuals and calls for a new expedition soon to come.

We anticipate arduous but rewarding times ahead for giant tortoise conservation biologists.