If the Oregon militiamen were Muslim or black, they'd be dead by now 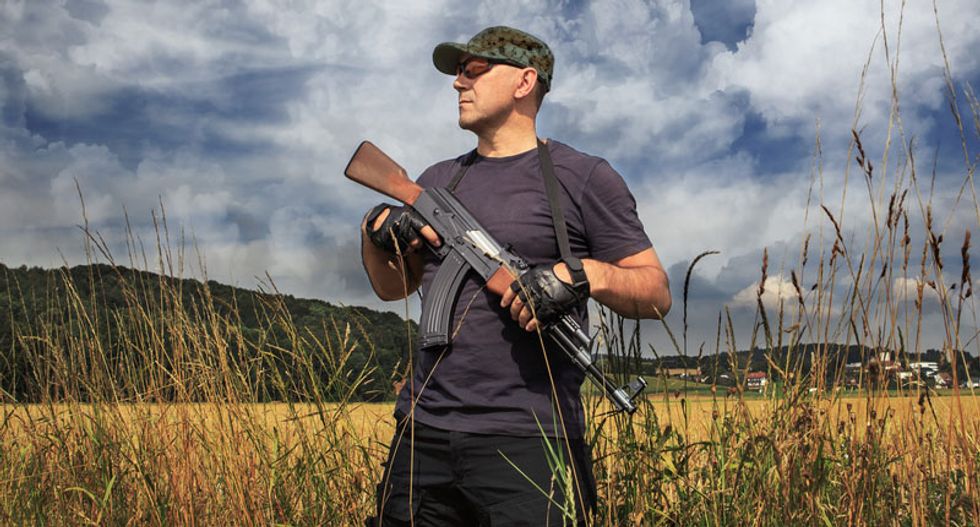 If, in a vacuum, I told you that a bearded man with his head covered had posted a video on social media calling on his followers to leave their homes with weapons, migrate to a new area, take over government property “as long as necessary” and use violence if confronted by law enforcement, you’d probably assume that I was talking about the latest propaganda video released by Isis, filmed in Iraq or Syria and intended to recruit violent Muslim extremists.

But that exact call was recently issued on Facebook by white rancher Ammon Bundy, the son of Cliven Bundy who also engaged in an armed standoff with law enforcement in 2014 and who currently owes the government more than $1m in fees. The younger Bundy’s goal this time was to encourage his fellow American “patriots” to take up arms against the US government in protest of the arson convictions of ranchers Dwight Hammond Jr and his son, Steven.

Militia leaders claim approximately 150 followers accepted Ammon Bundy’s call, although reporters on the ground are saying it’s far fewer. The armed men are currently occupying the Malheur National Wildlife Refuge in Burns, Oregon to, in their words, “assist in helping the people of Harney County claim back their lands and resources” . Ammon Bundy has said that his people won’t “rule out violence” if law enforcement “tries to remove them”.

But, don’t worry America: he promised everyone that “we are not terrorists”. What a relief.

Of course they’re not “terrorists”: Bundy and his followers are just your average angry white “freedom fighters”, who use weapons and ammunition to protect the US constitution and American values from the government and other Americans who want them to abide by federal laws like everyone else.

But if Bundy and his followers were like the 38% of Americans who aren’t white , people across America wouldn’t be watching this surreal, dangerous episode unfold and wondering what they could do to be labeled a “militia” when occupying a federal area with guns instead of “terrorists”, “thugs”, “extremists” or “gangs”.

If one black man holding a plastic toy gun even walked in the direction of a federal building, let alone with 150 other black men all holding loaded rifles, he’d be shot dead by law enforcement, no questions asked. If 15 Muslims occupied a 7-Eleven with BB guns and masala Slurpees, federal law enforcement would probably roll up with 6 MRAPs and immediately take everyone out Waco-style (but without a Congressional investigation ).

We don’t need to racially profile individuals who look like these armed militiamen (white men with bushy beards and beer bellies), but it’s time for mainstream politicians to at least acknowledge and confront this dangerous threat within our borders.

Since 9/11, more people in America have been killed by right wing terror attacks than violent jihadists (48 deaths to 45 deaths) . America witnessed an “unprecedented rise” in radical right wing, anti-government groups after the election of President Barack Hussein Obama. Yet, the Department of Homeland Security buried an analyst’s early 2009 warning about the growing threat of right wing terror groups to focus solely on Muslim extremists, caving to conservative pundits who complained the DHS was demonizing right wing speech by targeting these groups.

And although the number of people involved has reduced in the past two years, it has not dampened the level of criminal extremism, according to the Southern Poverty Law Center.

Such groups , some of whom have been involved in armed hostilities since the report was withdrawn, are also often openly white supremacist, hostile to immigrants, Islamophobic and prone to anti-government conspiracies.

In other words, they are not unlike Donald Trump’s base . And while this is the time that we would normally expect calls for all moderate militiamen to stand up and condemn the violent extremism within their midst, don’t hold your breath. Republican Senator and presidential candidate Ted Cruz will probably not ignore political correctness and ask, “How can we defeat radical white terrorism with Presidential candidates who refuse to utter the words ‘radical white terrorists?’” Trump, who recently said that he’s in favor of killing the family of terrorists to defeat extremists, will assuredly not apply the same standard to white American “militia” members, even if they do employ the violence they’ve promised.

The sad truth is that extremists – both at home and abroad – are often disaffected, frightened and angry people desperately searching for purpose, validation and meaning in a world they feel has left them behind. It’s a sickness that can infect almost anyone, regardless of race, ethnicity, religion or gender.

It’s certainly taken hold of Jon Ritzheimer, a US Marine veteran involved in the Oregon stand-off . He’s a member of the Three Percenter club , which alleges that their armed and trained members are “defenders of the constitution” willing to “protect our rights against a tyrannical government and foreign invaders”. (Like Bundy, they do not condone any threats or intimidation tactics “unless an action is warranted”.) Ritzheimer also led the armed, anti Muslim mosque protests earlier this year in Arizona .

Before taking over the wildlife refuge, Ritzheimer – like other extremists before him – posted a “goodbye” video for his family rationalizing his actions as defending freedom against a “tyrannical government.” “I didn’t come here to shoot, I came here to die,” echoed another militia member , who identified himself only as “Captain Moroni”.

Extremism comes in different colors, ethnicities, beards and head coverings – which is why racial profiling cannot protect us from all extremist violence. Maybe it’s time for politicians and law enforcement to acknowledge inconvenient truths and confront the extremists with “American” names and grievances as they would any other. The security of our homeland – or at least our national wildlife refuges – might depend on it.

“John Solomon and Kash Patel have been named NARA representatives. They will work to make available to the American people previously declassified documents that reveal a clear conspiracy to unlawfully spy on candidate and then President Donald J. Trump — by the FBI, DOJ, and others — the largest state-sponsored criminality in American history,” Trump spokesperson Liz Harrington alleged.

Tennessee is threatening Nashville’s budget to force it to hold 2024 RNC Convention: report

The GOP governor of Tennessee is playing hardball with the Democratic mayor of Nashville in an effort to bring the 2024 RNC Convention to the state in spite of worries about the violent tendencies of Donald Trump's party, NBC News reported Friday.

"Nashville Mayor John Cooper, a Democrat, has raised 'significant security concerns' directly with RNC Chair Ronna McDaniel, according to two sources familiar with the conversations between the mayor's office and the RNC," Natasha Korecki reported. "Talks among the mayor’s office, Tennessee Gov. Bill Lee, the RNC and the host committee have been ongoing for weeks as the search for the Republican convention site has narrowed to Milwaukee and Nashville."

Following the Supreme Court’s decision to overturn Roe v. Wade — the case that guaranteed the right to an abortion — President Joe Biden and the Department of Justice have endorsed a legal theory that could weaken states’ efforts to ban access to medication abortion. Soon after the court’s 6-3 decision was released Friday, Attorney General Merrick Garland offered the first clues of how the federal government may attempt to shore up at least some level of abortion protections.