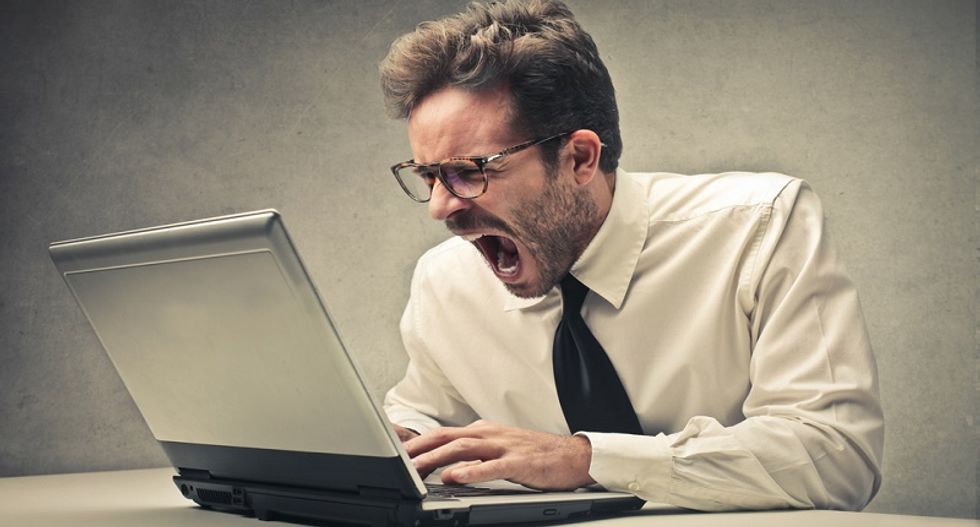 Angry man on a computer (Shuttershock)

Every new technology threatens to kill off some revered institution. But in the waning months of 2015, more than a few smart and tech-savvy commentators began suggesting a radical hypothesis: that the rise of social media threatened to deliver a death blow to civic consensus and even to truth itself.

“The news brims with instantly produced ‘hot takes’ and a raft of fact-free assertions,” Farhad Manjoo observed in the New York Times . “The extremists of all stripes are ascendant, and just about everywhere you look, much of the internet is terrible.”

In the Washington Post , Anne Applebaum went so far as to demand that Mark Zuckerberg donate the entirety of his fortune to undo the damage Facebook has done to democracy. “If different versions of the truth appear in different online versions; if no one can agree upon what actually happened yesterday; if fake, manipulated or mendacious news websites are backed up by mobs of internet trolls; then conspiracy theories, whether of the far left or far right, will soon have the same weight as reality. Politicians who lie will be backed by a claque of supporters.”

History is on the side of Zuckerberg

These arguments obviously go against the defining creed of the internet religion: that increasing access to information and social connection is an inherently positive force. Zuckerberg included the political impact of Facebook in his pre-IPO letter to shareholders. “We believe building tools to help people share,” he wrote, “can bring a more honest and transparent dialogue around government that could lead to more direct empowerment of people, more accountability for officials and better solutions to some of the biggest problems of our time.”

Were those lofty ambitions not just naive but actually dead wrong? Could it be, as Applebaum and Manjoo suggest, that this latest phase of democratizing our communication channels has turned out to be a politically regressive force, increasing the levels of demagoguery and deceit and civic conflict?

History is undeniably on the side of Zuckerberg. Think of all the step changes in human connection over the eons — from scrolls to the printing press to the pamphleteers to the newspapers. Yes, each transition had its own particular form of tumult, and each undermined its fair share of existing authorities, but with the hindsight of centuries, they are all now considered to be fundamentally on the side of progress: democratizing the flow of information and decision-making in society, and increasing the quality of those decisions. No one is hankering to rewind the clock to, say, the media of the 16th-century: post-Gutenberg, but pre-pamphleteers.

So it does seem rather convenient that the ladder of progress would extend up exactly to the rung of the last generation’s media, and then come to an abrupt stop. Any the-golden-age-just-happens-to-be-the-one-I-grew-up-with argument deserves special scrutiny, but let’s say that Applebaum and Manjoo are right, and this time it is truly different. Why would history’s long arc take this surprising detour?

It could be that it is not the scale of connection that plagues us, but rather the way those connections are being wired. Perhaps there is something in Facebook or Twitter’s architecture that turns those potentially liberating connections into ones that promote deception and rancor. Perhaps civil society needs a different algorithm to thrive in an over-connected age.

It would be helpful, certainly, if the default platform of the social media age were not owned by a private company, where we could experiment more freely with different rules for sharing information and opinions, and where our online identities belonged to us and not to giant multinationals.

But there is another possible explanation here: that what Manjoo and Applebaum are perceiving as runaway extremism is just the sound of an increasingly democratic discourse. There are more voices audible now, more points of view circulating through the infosphere. We’re quick to be outraged when an extremist who doesn’t share our political values finds a platform via social media, but we are less likely to notice that the spectrum has widened on our side as well.

Those on the left who worry that Facebook and Twitter have been a breeding ground for climate-deniers and Tea Party fanatics should remember that #occupywallstreet and #blacklivesmatter both began as hashtags on Twitter.

The same holds true in the Presidential race. Historically, the most striking thing about the campaign so far is not Trump’s ascension, but the fact that a self-proclaimed socialist is running a close race with heir apparent Hillary Clinton. Bernie Sanders has three times as many Twitter followers as Republican establishment candidate Jeb Bush, despite the hundred million dollars Bush has raised for his campaign. Sanders, much more than Trump, is a pure-bred social media phenomenon. Trump has obviously used Twitter effectively, but his name recognition derives from network television and his real estate empire.

And there is ample precedent for the Trump candidacy; in a sense, The Donald is a fusion of the two dark horses from the 1992 campaign: nativist outsider Pat Buchanan and eccentric billionaire Ross Perot. An observer of that 1992 campaign would hardly blink an eye at the premise that a Trump-like figure might play a role in future presidential campaigns. But the idea that a card-carrying socialist might run a close second in the primaries would have seemed preposterous, given the strong centrist tendencies of that era’s Democrats.

Socialists can mount competitive presidential campaigns now because the boundaries of acceptable political positions are widening in an age no longer governed by two parties, three networks, and a handful of national newspapers. At the dinner table of civic debate, everyone now gets to invite their crazy cousin. Sometimes the crazy cousin starts ranting about UFOs or building a wall to keep the Mexicans out, and sometimes he actually brings a useful new idea to the discussion. The fact that fringe perspectives now can attract national consideration shouldn’t worry us in itself. What we need to watch closely is which of those fringe perspectives end up shaping actual policy.

In the month leading up to the 2008 inauguration, the incoming Obama administration opened up a Citizen’s Briefing Book on the web, inviting the US population to suggest priorities for the next four years — a small experiment in direct democracy inspired by the Open Government movement that was then on the rise. Ordinary citizens could suggest initiatives and also vote to support other initiatives. In the end, two of the three most popular initiatives urged Obama to radically reform our draconian drug laws and end marijuana prohibition.

At the time, the results provoked titters from the media establishment: this is what happens when you open the gates to the internet crazies; you get a horde of stoners suggesting policy that has zero chance of mainstream support. And yet here we are seven years later, and that briefing book turned out to be the first glimmer of an idea whose time had come. Sentencing laws are being re-written; pot is legal in half a dozen states; and a majority of Americans now support full legalization.

Look back over the decade of social media, and ask yourself: what are the defining American political, legislative or juridical actions — not opinions or hot takes or stump speeches — of this era, the ones that will get mentioned in the history textbooks that our grandchildren study.

I would list seven: The election (and re-election) of the first African-American president; the largest expansion of health care coverage in generations; the Supreme Court decision endorsing gay marriage as a constitutional right; drug sentencing reform and the end of marijuana prohibition; the Iran nuclear deal; the normalization of US-Cuban relations; and the Paris climate accord. Yes, you could list a hundred divisive and polarizing ideas that were floated during that period, but the ideas that actually generated enough popular support to be transformed into action were consistently ones that favored tolerance, empathy, and collaboration.

Perhaps we are just at the beginning stages of the social media revolution, and in two years President Trump will be building his gold-plated wall along the Mexican border.

But until that time, I think we shouldn’t be too worried by the noise of the new public sphere. There are more dividers with a soapbox thanks to social networks, but so far it is the uniters that are actually getting things done. The price of politics in the social media age is that the crazies get a place on the playing field. The test is whether they win.