Larry Wilmore rips Trump for trying to 'close the deal' with evangelicals: 'Come on God, are you out of lightning bolts?' 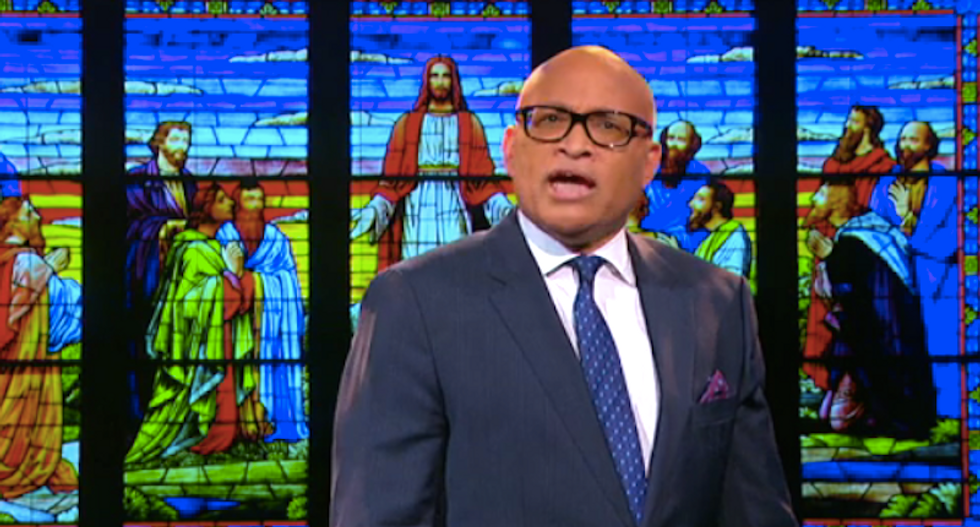 The Republican frontrunner spoke Monday at Liberty University, where he bragged that he had set a record for attendance for a convocation speech -- which students are required to attend.

Trump also bragged this week in a TV interview that he had "a very great relationship with God," but he declined to specify any favorite Bible verses and could not decide whether he preferred the Old Testament or the New Testament.

"Am I the only one seeing how transparent this is?" Wilmore said. "You've never read the Bible, Donald Trump. Come on, if Trump ever even touched a Bible, it sizzled."

Wilmore also mocked Trump for pandering to Christians by reading a verse from 2 Corinthians -- which he incorrectly pronounced "Two Corinthians" instead of "Second Corinthians" -- and he also misidentified the university as Liberty College before correcting himself.

"There is so much wrong with that," Wilmore lamented. "You know what I love about this? He doesn't even know how wrong 'Two Corinthians' sounds. When people laugh, he acts like he's the originator of that mysterious joke."

Wilmore offered a non-religious analogy to explain just how wrong Trump was.

Wilmore despaired as Trump repeatedly promoted his book, "The Art of the Deal" -- which the real estate tycoon and reality TV star placed as second only to the Bible.

"Please stop him from talking, I can't take it anymore," Wilmore said. "Come on God, are you out of lightning bolts?"

Wilmore then adopted the style of an evangelical minister to beg conservative Christians not to let Trump "close the deal" with them.