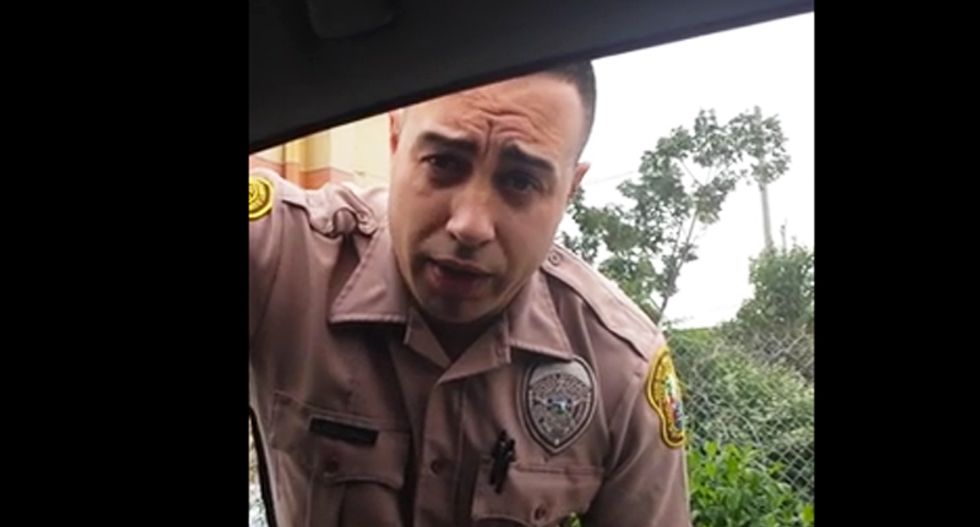 A Miami police officer was on the receiving end of "What's the emergency?" when a woman following him convinced him to pull over after trailing him at speeds up to 90 miles per hour as he zig-zagged in out and out traffic.

According to the Miami Herald, the series of three videos uploaded to YouTube came from a woman identifying herself as Claudia Castillo who documented her pursuit of the cop with her cell phone.

After noting several times that she was barely able to keep up with Miami-Dade police officer by driving 80, she finally got close enough to get his attention by flashing her lights and he pulled over.

In the video, the officer is seen approaching her open passenger-side window, where he was told, “The reason I pulled you over today is because I saw you, since Miller Drive when you were first jumping onto the Palmetto, and you were pushing 90 miles an hour.”

“You passed me like I was standing still,” the woman replied.

After explaining how long she had been chasing him, she asked, “I just wanted to know: what’s the emergency?"

“Um, I don’t know how fast I was going,” the officer stated. “But I can tell you this, I’m on my way to work right now. I don’t believe I was speeding. But like I said, you're entitled to your opinion.”

He then asked Castillo if everything was fine with her, to which she replied, "Yeah, I'm fine. You were just speeding."

"I apologize and I'll be sure to slow down then," he said.

She then lectured him on leadership in the community and setting an example, before declining the abashed officer's name and badge number in exchange for a promise to be more careful in the future.

According to the Herald, rival paper Sun Sentinel won a Pulitzer Prize in 2013 after it used electronic-tolling data to show off-duty cops in squad cars driving at 130 mph down highways.

Watch all three videos below:
Report typos and corrections to: corrections@rawstory.com.