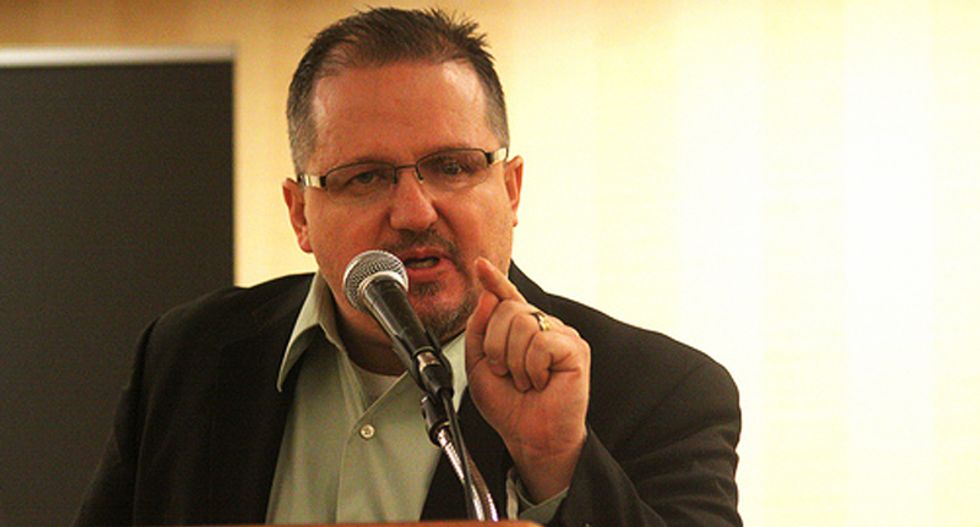 Despite his earlier criticism of Ammon Bundy taking over the Malheur National Wildlife Refuge in Oregon in support of imprisoned Dwight and Steven Hammond, the founder of the anti-government militia group Oath Keepers warned federal authorities to tread lightly unless they want a "civil war" on their hands.

Writing on the Oath Keepers' website, Stewart Rhodes warned ominously that "there will never again be a free Waco,” and that the Obama Administration risks "starting a conflagration so great, it cannot be stopped, leading to a bloody, brutal civil war."

Rhodes had previously stated that the Oath Keepers -- made of members who claim to have served in the military and law enforcement -- would stand down and not participate in the occupation of the wildlife refuge.

While the situation in Oregon has remained calm -- outside of one member being arrested on Friday for driving a federal vehicle to the grocery store -- Rhodes' saber-rattling was, in typical Oath Keeper fashion, over the top.

Under the heading: "Warning to U.S. Military and Federal LEOs: Do Not Follow Orders to 'Waco' Ammon Bundy Occupation, or Risk Civil War," Rhodes was blunt -- although wordy in the process.

"This situation (Oregon occupation) must not be handled in a military or paramilitary fashion, using military assets, military rules of engagement, or otherwise attempting to end it suddenly by use of dynamic assault, resulting in catastrophic loss of life, as has occurred twice in recent American history, with horrific results (at Ruby Ridge in 1992, and at Waco Texas in 1993)," he wrote. " If you do it 'Waco' style here, you risk pushing this nation over the edge into a civil war, because there are 'no more free Wacos.'”

Concerns have been raised by authorities that the occupiers hoped to provoke a Waco-style attack in order to promote their anti-government views.

Rhodes continued, "Despite that reality of there being no emergency here, we have very good reason to believe that ideologue leftist bureaucrats within the Obama Administration – such as within the D.O.J., and their politically minded 'perfumed prince' puppets within the D.O.D. – are pressuring you to prepare to use military assets and military rules of engagement to conduct a dynamic raid," before adding ominously "We hear things. We’ll just leave it at that."

Addressing both law enforcement officials and  military members, Rhodes claimed, "We agree, and therefore we warn you to do this right, no matter what the Obama Admin overlords try to demand.  Do it right, or risk starting a conflagration so great, it cannot be stopped, leading to a bloody, brutal civil war. And do it right, because it is your duty to refuse those orders, under your oath to defend the Constitution against all enemies, foreign and domestic. And that includes the domestic enemies now 'occupying' Washington D.C.'"

"Your brothers in heaven are watching.  Do the right thing.  Stand down, and refuse to obey evil, ghoulish sociopaths who salivate at the prospect of watching Americans die on camera, like they watched during Benghazi, " he stated. "Tell them that if they want American patriot blood, they need to strap on a plate carrier, chest rig, and an M-4 and go do it themselves."