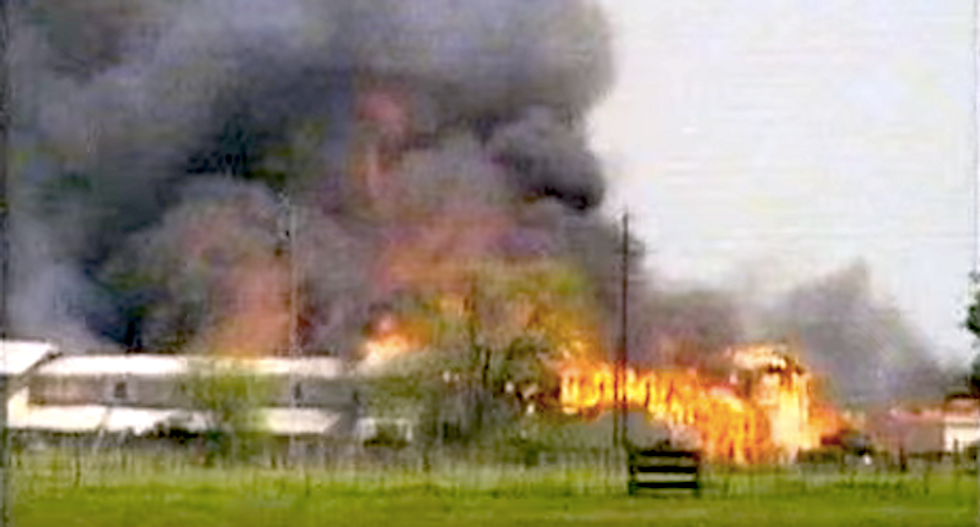 The right-wing gunmen who broke into the visitors center of an Oregon wildlife refuge with plans to stay indefinitely are apparently trying to draw federal agents into an armed showdown like those in Ruby Ridge and Waco.

Those previous standoffs -- which left a total of 78 people dead -- galvanized the right-wing militia movement two decades ago and inspired Timothy McVeigh to bomb a federal building in Oklahoma City.

Those tragedies also explain why law enforcement agencies have so far seemed reluctant to engage the armed men who took over the building at Malheur National Wildlife Refuge as part of an attempt to take over the government.

FBI agents engaged in an 11-day standoff with white separatist Randy Weaver in August 1992 at his family's cabin in Ruby Ridge, Idaho, after he failed to show up for a court hearing on federal firearms charges.

Weaver was charged with selling two illegal sawed-off shotguns to an undercover agent during an investigation of white supremacist groups in the upper northwest, and he was indicted in December 1990 after refusing to infiltrate groups like the Aryan Nations as an informant.

He failed to show up for a court hearing in February 1991, and his wife, Vicki Weaver, sent ominous letters to federal authorities as U.S. Marshals determined the best way to bring in the heavily armed fugitive.

Federal agents finally went to arrest Weaver, who had holed up with his family at a remote cabin to await the apocalypse, and waited outside for 10 days until someone started shooting.

Shots erupted again the next day after the FBI changed its own rules of engagement and allowed agents to shoot any armed man they spotted at the cabin -- and FBI sniper Lon Horiuchi opened fire on Weaver inside the cabin.

Weaver was shot and wounded in the arm, and another round fatally struck Vicki Weaver in the head and wounded family friend Kevin Harris.

A jury ultimately acquitted Weaver and Harris of all charges in the marshal's death, although Weaver was found guilty of failure to appear in court, and the U.S. government agreed to pay Weaver and his three daughters $3.1 million as part of a settlement.

A Senate investigation found that every agency involved in the case had acted carelessly, although they also found Weaver himself was also to blame for the bloodshed -- which he admitted himself during testimony.

The Waco standoff began Feb. 28, 1993, when when Bureau of Alcohol, Tobacco and Firearms agents went to investigate what they believed was an illegal arsenal compiled by members of the Branch Davidian religious sect.

A gun battle erupted, although again no one has been able to determine who shot first, and four agents and a dozen members of the sect were killed.

FBI agents tried to flush out the Davidians during the 51-day siege by flooding their compound with light 24 hours a day and blaring loud music and disturbing sounds -- such as the screams of rabbits being slaughtered.

The assault killed 75 sect members -- a third of them children.

At least one of the gunmen who traveled to Oregon from out of state expressed a wish to become a martyr in a gun battle with U.S. authorities.

“I didn’t come here to shoot, I came here to die," said one militia member, who identified himself only as "Captain Moroni" -- a name with great significance to Mormons and anti-government extremists.

A Justice Department investigation faulted FBI agents for their approach to the religious sect, and right-wing extremists have cited the fatal siege as proof of the federal government's intention to kill anyone that cannot be controlled.

Federal and other law enforcement agencies revised their rules of engagement following the Waco siege to favor waiting for heavily armed anti-government demonstrators to peacefully surrender.

McVeigh bombed the Murrah Federal Building exactly two years after the Waco siege ended in fire and bloodshed, and he specifically cited both that incident and Ruby Ridge as his motivation.

He said he waited two years for "non-violent 'checks and balances'" to handle the matters, but he said the government and its media watchdogs failed to offer satisfaction.

His comments were echoed by Mike Vanderboegh, a longtime leader in the right-wing "Patriot" movement and co-founder of the "Three Percent" movement -- which many of the Oregon gunmen cite as an inspiration for their actions, which they describe as self-defense against tyranny.

“Waco can happen at any given time,” Vanderboegh said last year, as conservatives fretted over the military's Jade Helm 15 training exercise. “But the outcome will be different this time. Of that I can assure you.”

Vanderboegh, however, said he believes the Oregon standoff is a possible false flag operation led by “federal provocateurs, sociopaths and idiots with a John Brown complex” -- although he would eagerly support any outbreak of violence provoked by the situation.

“We must get across to the Feds that if they do not end this peacefully, if they go for a dynamic raid that gets people killed, that they will start a national conflagration that will be fought using the principles of Fourth Generation Warfare as adapted to an American civil war," he wrote in a blog post.

Watch CNN coverage of the end of the Waco siege: