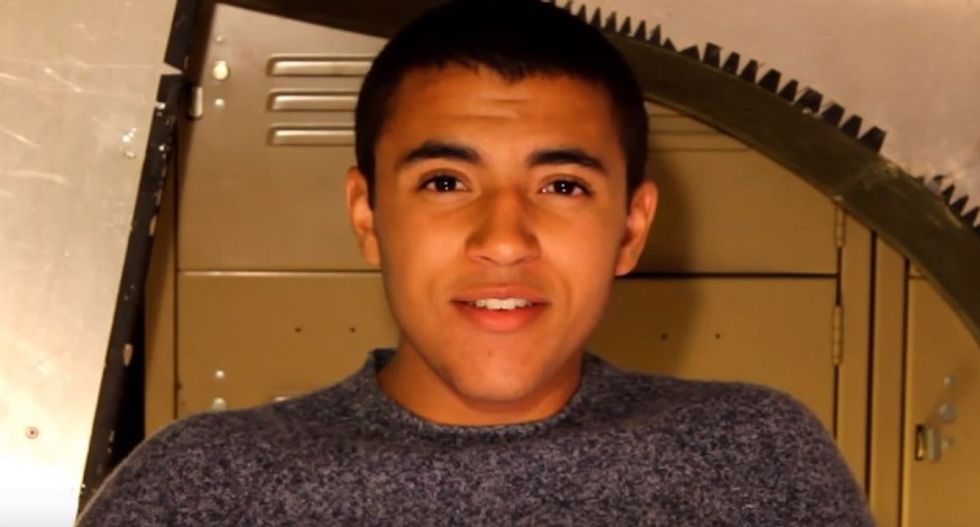 In November, with the support of anti-gay activists, a Houston city ordinance extending civil rights and non-discrimination protections was defeated by voters. In response, Joan Wilson, a Washington state mother, took out an ad in Sunday's Houston Chronicle under the "Celebrations" section, praising her son Drake for coming out, the Texas Observer reports.

"The parents of Drake are pleased to announce that their son has come out," the ad reads. It lists several of his achievements, including that he is a church deacon, enjoys film making and baking. "And yes, he adores Barbra Streisand."

After discovering the identity of the family, the Observer interviewed Wilson, who said she posted the ad to defy bigotry.

“I couldn’t think of a better place than Houston, out of the entire country, where they needed to hear my message of pride,” Joan Wilson told the Observer. “My announcement was my way of humanizing the issue.”

“We are blessed to live in a state which has passed anti-discrimination laws,” Wilson continued. “As a mother, I have much trepidation in thinking my son might one day live in a state such as Texas.”

Drake Wilson posted a humorous, cheerful YouTube video announcing he was gay, and also pointing out that he is also a Christian.

"As much as the ladies will hate to hear this, I'm gay," he quips into the camera. "And while I'm not proud of this because I don't like to promote society's unrealistic and unachievable standards of beauty, I did love to play Barbies with my older sister, Gabrielle."

He also expressed anger that he had to "come out" at all, but also thanked his family for their support and all the activists before him who "have gotten this world to a place where I can come out at only 16 years old."

The conservative Texas Pastor Council fought to defeat the Houston civil rights ordinance by banking on transphobia, the Observer reports. It's a tactic that has been used where similar ordinances were up for vote -- scaring people with misinformation about trans people in restrooms. One ad shows a man following a little girl into a bathroom stall.

In September, the Duggars fought a city ordinance in Fayetteville, Arkansas that would also give LGBT people legal protection against discrimination. Matriarch Michelle Duggar used the same scare tactic.

"I don’t believe the citizens of Fayetteville would want males with past child predator convictions that claim they are female to have a legal right to enter private areas that are reserved for women and girls,” she said in the call. “I doubt that Fayetteville parents would stand for a law that would endanger their daughters or allow them to be traumatized by a man joining them in their private space.”

The ad had a heartwarming effect on Houston resident Darryl Morrison.

“I can’t say I’ve ever seen one of these before,” Morrison wrote to the Observer. “With all the terrible LGBT news out of Houston lately, it was a sliver of hope.”

Watch Drake's coming out video, as posted to his YouTube channel, here: