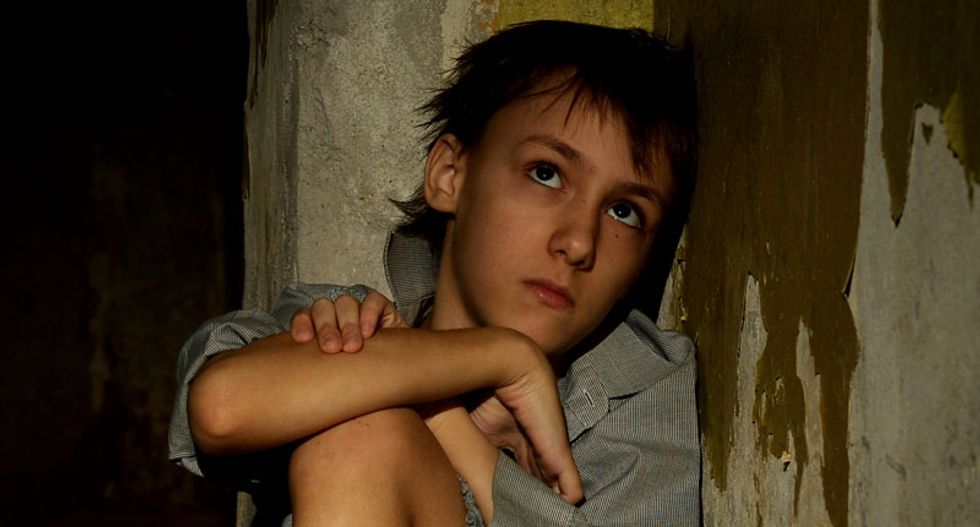 A young boy being held in a dark room (Shutterstock)

Solitary confinement is a commonplace experience for children held in Nebraska juvenile detention facilities, a report has shown, with minors routinely detained in isolation for days, weeks, even months at a time.

To varying degrees, in each of the state’s nine juvenile facilities children are placed in solitary confinement for “relatively minor offenses” such as keeping too many books, according to the report compiled by the state’s American Civil Liberties Union chapter. Other infractions triggering the “overused” practice included talking back to staff members or refusing to follow directions.

The ACLU Nebraska spokesperson said they had heard reports of children as young as 12 being put into solitary confinement, although this was not confirmed by any of the facilities themselves.

“The youth placed in solitary confinement are often in need of support – not a cage,” Danielle Conrad, executive director of ACLU Nebraska, said in a statement. “The experts agree – what Nebraska is doing is harmful to youth and does nothing to improve public safety.”

Jacob Rusher, who was placed in the Douglas County youth facility three separate times as a teenager, said he was put into solitary confinement during each stay at the center. He was at the facility in 2008, during which Douglas County had two forms of solitary confinement – one in a separate unit and one in a normal cell where he could look out the window at his peers but not interact with them.

“It was 23 hours a day alone, no TV or radio,” Rusher was quoted as saying in the report . “You were in there with one book, a blanket, a mat and a toothbrush. No art materials, no hobby items – everything was considered contraband.”

Rusher said he developed anxiety and began a pacing habit as a result of being held for months at a time.

Nebraska has the third highest per capita number of youth under 21 in juvenile detention centers, according to the Kids Count Data Center . Some facilities surveyed in the report had no policies governing or tracking the use of solitary confinement.

Nebraska is an outlier in its isolation practices, as other states across the country limit and track the solitary confinement of children, according to the report.

New York City’s Rikers Island Jail eliminated the use of solitary confinement for all inmates aged 21 and under last year, following a report from US attorney Preet Bahara’s office which found “excessive and inappropriate” use of solitary confinement on juvenile inmates. About 15-25% of adolescents at Rikers were put into solitary, with some sentences ranging up to several months.

Rikers said in January 2015 that it was moving to phase out the use of solitary on juvenile inmates by 2016, and set maximum isolation for adult inmates at 60 days.

The ACLU Nebraska recommended that state policymakers consider establishing policies on solitary confinement that can be applied across all facilities. Aside from banning the practice altogether, the report suggested not using solitary confinement as a punishment except in documented extreme situations, with no child placed in isolation for more than four hours.

Dawn-Renee Smith, a spokeswoman for the Nebraska department of correctional services, told the Guardian the department is working with several other organizations to “develop rules and regulations governing the use of restrictive housing for all populations”.

“NDCS uses restrictive housing as necessary for youthful offenders adjudicated as adults and sentenced to its custody,” Smith said in a statement. “There are processes in place to ensure a review by the facility warden as well as to provide the individual with a voice to appeal the decision.”