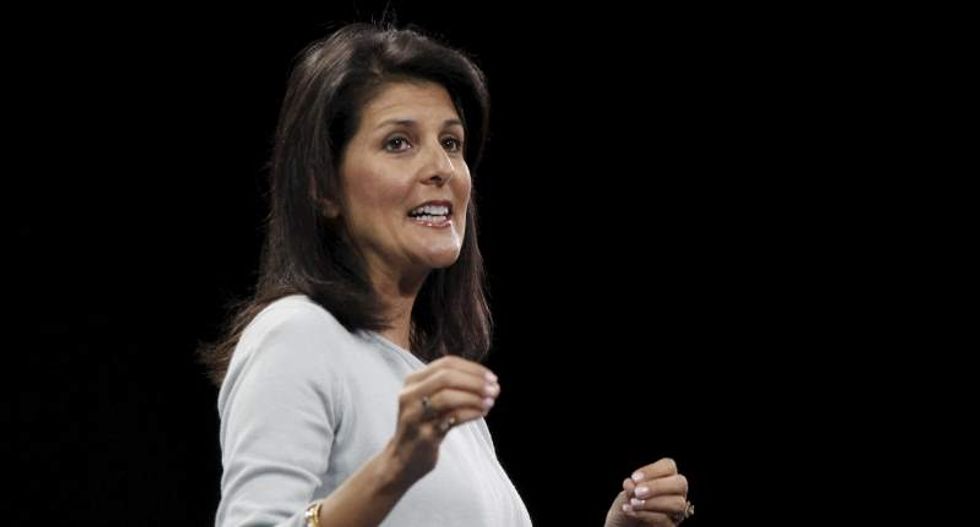 South Carolina Governor Nikki Haley, in the Republican response to President Barack Obama's State of the Union address on Tuesday, will take a softer tone on immigration than the harsh rhetoric often heard from her party's presidential candidates.

The 43-year-old daughter of Indian immigrants noted in excerpts released in advance of her nationally televised speech that "immigrants have been coming to our shores for generations to live the dream that is America."

She added: "During anxious times, it can be tempting to follow the siren call of the angriest voices. We must resist that temptation. No one who is willing to work hard, abide by our laws, and love our traditions should ever feel unwelcome in this country."

Obama delivers his final State of the Union speech to Congress at 9 p.m. EST on Tuesday (0200 GMT on Wednesday).

Lethal attacks by militants last year, including in Paris and San Bernardino, California, have prompted some of Haley's fellow Republicans to urge a pause in Obama's program to bring refugees from Syria and Iraq to the United States.

Another leading Republican contender, Texas Senator Ted Cruz, has said Christians, but not Muslims, should qualify for refugee status.

Trump, from the start of his campaign, has aroused controversy with his comments on immigration. He has said that if elected, he would build a wall on the southwestern border with Mexico to keep out illegal immigrants and force Mexico to pay for it. The billionaire businessman began his campaign last June by saying Mexico was sending its criminals and rapists to the United States.

Haley, born Nimrata Nikki Randhawa, has been touted as a possible vice presidential candidate in the November election to replace Obama, who is completing his second term in office.

She won praise last year for leading an effort to remove the Confederate battle flag from the South Carolina Capitol grounds following the massacre of nine black churchgoers in Charleston.

The flag, carried by Confederate troops on the losing side in the 1861-1865 Civil War, is seen as a symbol of racism and slavery by many. But others proudly hail it as an emblem of Southern heritage.

Haley also will attack Obama's fiscal policy and landmark healthcare law, known as Obamacare, and pledge that if a Republican becomes president in November, working families' taxes will be cut and "runaway" U.S. spending will be constrained.