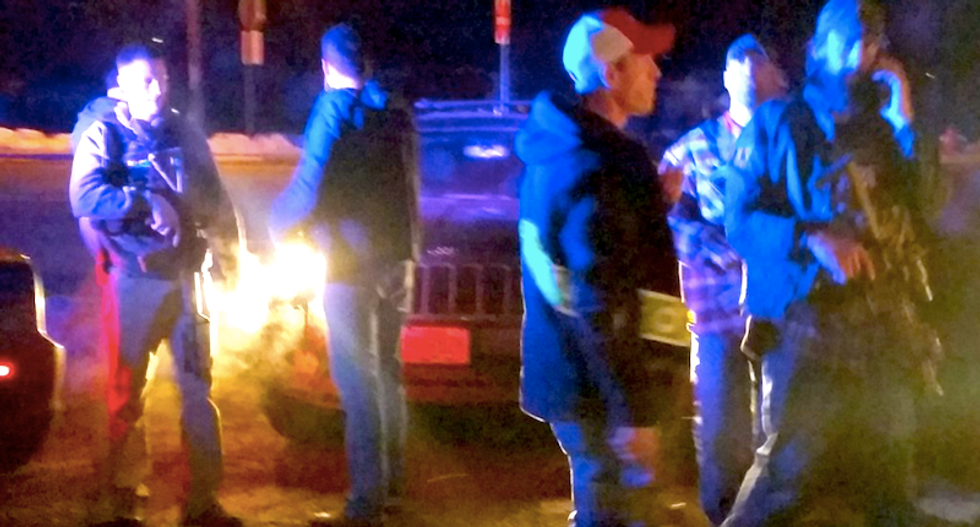 More than 100 people waited Tuesday evening at a senior center in John Day, Oregon -- where they expected to hear Ammon Bundy outline his vision for their county's future.

Instead, federal agents apparently sprung a trap and arrested -- or possibly shot -- the militant leader as he headed north up Highway 395.

The Raw Story's Arun Gupta was on his way to cover the community meeting when he was told the road was closed due to a crash -- and law enforcement officers told him alternate routes might take hours to reach the meeting in Grant County. Gupta soon learned rumors of what happened -- here's his account from Harney County:

We were right there, where Ammon Bundy was allegedly shot tonight, at approximately 5 p.m., on Highway 395. But we didn't know it. We were climbing the mountain and saw police lights ahead. There were at least two police cars, a car across the road, and a few cars ahead of us stopped. We thought it was an accident as an ambulance came into view. A cop told us to turn around, said it would be hours.

We were lamenting our bad luck because we were intending on attending the meeting in neighboring Grant County where Ammon Bundy, Ryan Payne and others were going to set up a new Committee of Safety. We were hoping to find an alternate way to the meeting. When we came back down the mountain the road was already blocked by state police with automatic rifles. In town, we happened upon an arrest scene.

We counted at least 10 law enforcement personnel from Oregon state police, FBI, and other unknown services with automatic rifles. They were arresting Joe O'Shaughnessy, who works with medics camped five miles away from the Malheur National Wildlife Refuge that the Bundys seized on January 2. O'Shaughnessy described himself as an Oath Keeper, but a representative of the group told Raw Story that he was not a member.

Militia members we have seen are visibly angry. One claimed, "Now you're going to see the Pacific Patriot Network mobilized."

Everyone, from police to elected officials to militia members, who have talked to The Raw Story over the last week said they didn't want this end in bloodshed. We don't have any confirmation if anyone was shot. It's rumors right now.

But even if there hasn't been violence, bloodshed seems a lot more likely now with scores if not hundreds of armed militia members in and around Burns, Oregon.

(Editor's note: This article was updated to clarify that Joseph D. O'Shaughnessy is not a member of the Oath Keepers.)