Rubio ready for a Clinton fight: 'How's she going to lecture me' on struggling 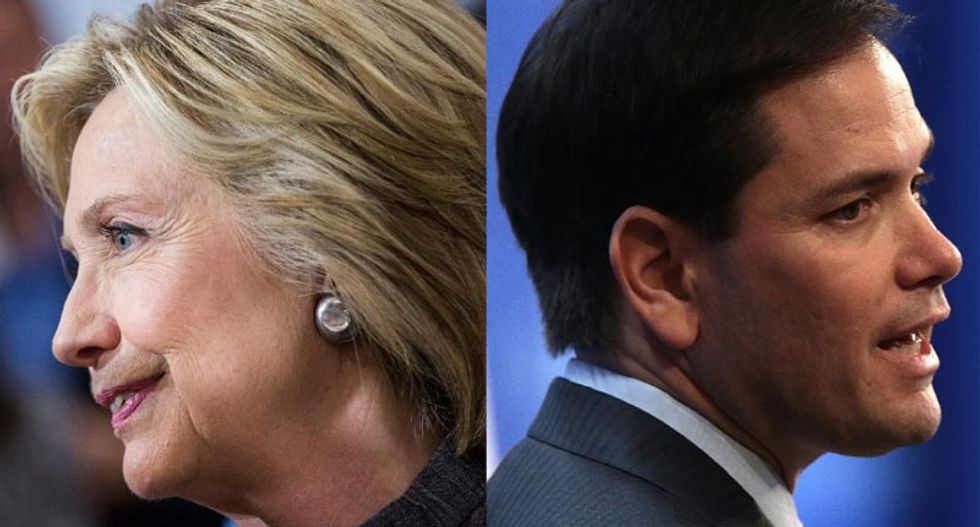 As Republicans enter the home stretch of selecting a candidate to win back the White House, Marco Rubio asked voters to envision a general election in which Hillary Clinton could “lecture” him on the lives of struggling Americans.

Speaking before a crowd of roughly 200 on the first stop of a swing through New Hampshire, which will hold the first primary in the US in just over a month’s time, Rubio underscored the importance of what he called “one of most important elections in a generation”.

The Florida senator, who is polling among the top three Republicans in most national and state polls, then focused his fire not on opponents within his own party, but on the Democratic frontrunner.

“How is Hillary Clinton going to lecture me about people living paycheck to paycheck?” he asked, reviving the case he made for his candidacy in the first Republican presidential debate last summer and has often referred to on the campaign trail.

Rubio, 44, launched his presidential campaign in April with a pitch rooted in his youth and a denunciation of “names of the past”. The jab was aimed not only against Clinton, the former senator and secretary of state, but also Jeb Bush, the son and brother of US presidents who then stood as the Republican frontrunner.

But the run-up to the election year was fraught with unexpected twists. On the Republican side that mostly meant the rise of Donald Trump – the bombastic real-estate mogul who remains the frontrunner with only 27 days before the Iowa caucuses.

On the Democratic side, Clinton holds a commanding lead nationally but has been forced to contend with an unexpected threat posed by Bernie Sanders.

“None of our candidates is a socialist,” Rubio quipped of the Vermont senator on Sunday, to laughs.

He nonetheless paid most attention to Clinton, who was also set to campaign in New Hampshire that day.

The emphasis on Clinton marked something of a departure from Rubio’s stump speech over the last year, which has been based on national security and his personal story as the son of Cuban immigrants who worked as a bartender and a maid.

Although he has consistently criticized the Obama administration’s foreign policy – and tied Clinton to it in her role as his first-term secretary of state – in recent days Rubio has painted a portrait of an American society where critical values are at stake.

On Sunday, he called the election “a referendum on our identity as a nation and as a people”.

“If you’re pro-life, you’re waging a war on women. If you believe in traditional marriage, you’re labeled a bigot,” Rubio said.

The senator is well positioned in New Hampshire, holding second in most polls, and he was well received by a crowd which awarded his speech a standing ovation and applauded in particular his push for a stronger military.

One voter did, however, point out that a Rubio-Clinton presidential debate would require the elimination of a more immediate threat.

“You’re going to have to beat Trump to have a shot at Hillary,” the man said, invoking the reality TV star whose support is nearly double that of Rubio’s in New Hampshire.

Rubio, rather than criticizing Trump, acknowledged how his chief opponent has so successfully channeled anger among voters to top a crowded field, that has now fallen from 17 to 13 candidates.

“I think it’s a legitimate thing to be angry about the direction of our country. You should be upset,” Rubio said, adding that many of his colleagues in Congress spend more time working toward their next elections than representing the people they serve.

Rubio himself has been criticized by opponents for his long absences from the Senate, where he has the worst attendance record of all 100 senators.

Rubio nonetheless urged voters in New Hampshire – which prides itself on its record in “picking presidents” – to bring home an election that has until now been marked by chaos.