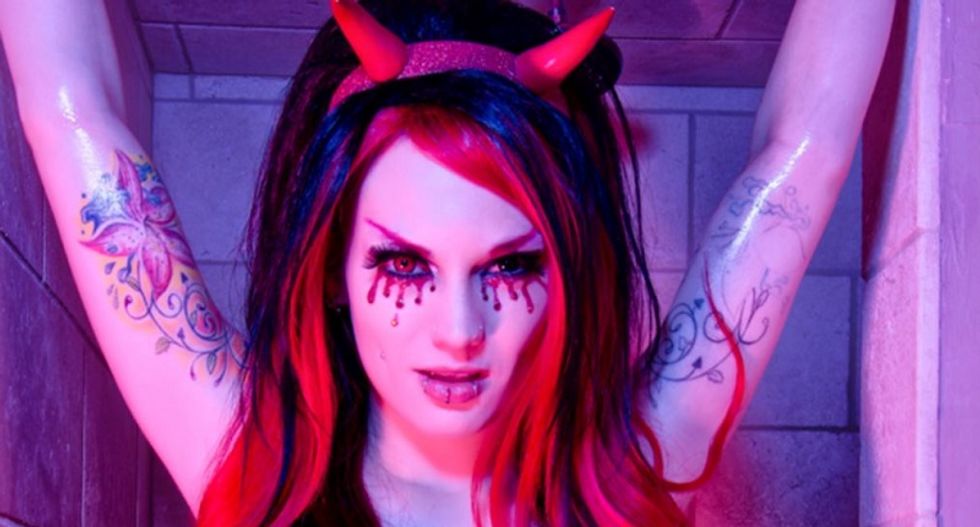 Michelle Shortt of the Satanic Temple

The city of Phoenix may be gearing up for a legal battle with Satanic Temple activists as the City Council considers an abrupt rule change in an effort to block the Satanists from delivering an invocation before a government meeting in February, ABC15 reports.

The City Council called an emergency meeting on Friday night to hammer out details of the rule change. If approved, it would only allow people to deliver the prayer at the opening of meetings if they have been invited to do so by elected officials. If two-thirds of the Council agrees to the change, it will go into effect in 24 hours and the effect would be the cancellation of the Satanic Temple's scheduled prayer.

"We weren't comfortable lending either our reputations -- or the constituency that voted for us, we didn't want them to think that we were [allowing] a Satanic prayer at a City Council meeting," Councilman Jim Waring told ABC15.

The Satanic Temple has responded it will not hesitate to file a lawsuit if its members' liberties are trampled.

"[I]t’s hilarious and disheartening at the same time to see such a level of Constitutional ignorance revealed in acting public officials," Satanic Temple spokesman Lucien Greaves said in a statement to the Friendly Atheist. "The move would clearly be legally indefensible, and we do not equivocate on this point: should the Phoenix City Counsel deny us our voice in the public forum, we will file suit."

The invocation was planned for the February 17 session and set to be delivered by Satanic Temple members Michelle Shortt and Stu de Haan, the Arizona Republic reports. The group doesn't worship Satan as a deity. They are non-theistic and push for separation between church and state and for religious pluralism.

City Councilman Sal DiCiccio has been outspoken on social media about blocking the Satanist invocation and tweeted a picture of a yellow caution sign bearing the words, "Politically correct area ahead."

Politicians pushing Satanic Prayer for "diversity and inclusivity," about to get pushed back https://t.co/OoY6byE39H https://t.co/gtAVqq5nIE
— Sal DiCiccio (@Sal DiCiccio)1454187611.0

But the Satanic Temple's response has been, more or less, bring it on.

"This is what Religious Liberty looks like when you open the forum, Councilman. Little Civics Lesson," the Temple responded via its official Twitter feed.

Shortt wrote Saturday that she hopes the dispute with provide a "hard fast lesson in Constitutional Law for our bloated, puzzled, and mentally atrophied theocrats."

"When the public forum is opened to one religious voice, it is opened to them all. That is the very definition of Religious Liberty, and that is the nature of pluralism," Shortt wrote on her Facebook page. "Let us hope that reasonable people can look to this situation and recognize that, ultimately, the beliefs and practices of The Satanic Temple are irrelevant in the question of our Constitutional Rights."