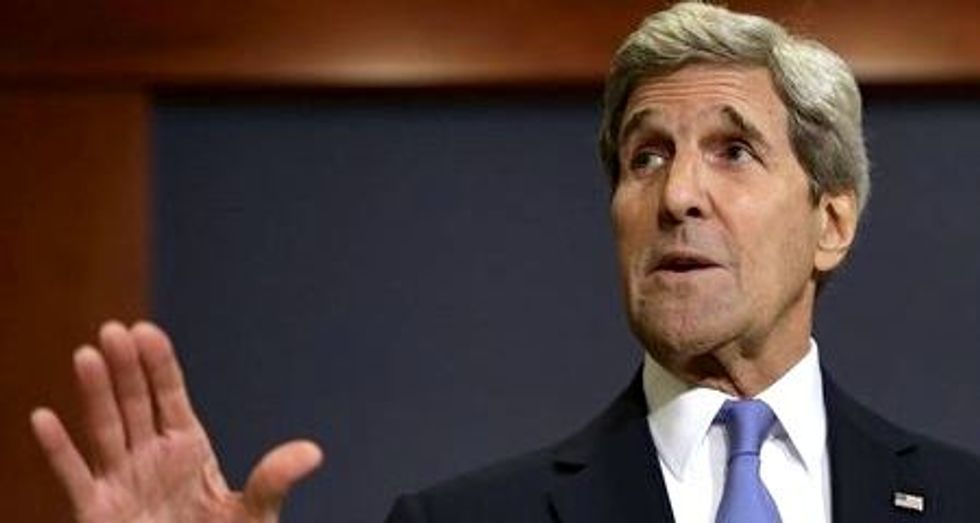 U.S. Secretary of State John Kerry makes a statement to the media before a closed door briefing with House members on the recent Iran nuclear deal in Washington July 22, 2015. REUTERS/Gary Cameron

Saturday turned out to be a momentous day in US-Iran relations. American Secretary of State John Kerry and Iranian Foreign Minister Javad Zarif took to the dais in Vienna to announce Iran’s compliance with the terms of last July’s nuclear accord and, therefore, the lifting of nuclear-related sanctions on the Islamic Republic.

“This evening, we are really reminded once again of diplomacy’s power to tackle significant challenges” Kerry said, citing all the curbs Iran had – according to the International Atomic Energy Agency – verifiably placed on its nuclear program.

But Implementation Day, as it came to be called, wasn’t the only thing Kerry was talking about it, and it wasn’t even the biggest news to come out of US-Iran diplomacy.

Instead, the world’s attention turned to the release of five American prisoners held in Iran. Four of the prisoners – for all of whom, so far as I can tell, one day in prison was one day too many – were released as part of a prisoner swap for Iranian-Americans held in the US on charges of non-violent offenses, including sanctions relief. Among the Americans set free were Amir Hekmati, a former US marine; Saeed Abedini, a Christian pastor; Nosratollah Khosrawi-Roodsari; and my friend and colleague, Jason Rezaian, the Tehran bureau chief of the Washington Post.

The fifth prisoner, Matthew Trevithick, an American student and journalist who had written for the Atlantic, the Christian Science Monitor, the Wall Street Journal and the Daily Beast, was freed outside the parameters of the deal, according to reports.

Supporters of engaging with Iran to resolve our differences took a moment to savor the soon-to-be homecomings of the men. This was yet another victory achieved with talks, not bombs, bullets or threats: the culmination of another painstaking process that required patience and, as with the early rounds of nuclear talks, secrecy. But after a moment, the time to savor was over.

That’s because, like any action President Obama takes on Iran, a firestorm of criticism soon came down from all directions. Hawks on presidential trail, Capitol Hill and, most of all, among Washington’s bevy of think tanks and advocacy organizations either came down swiftly against the deal or denounced its parameters so vociferously as to engender the same effect.

On the campaign trail, Republicans were ready to give anyone other that Obama and Kerry credit for bringing the American prisoners home. Republican frontrunner Donald Trump decided he was to thank for the release of the prisoners. “I’ve been hitting them hard, and I think I might have had something to do with it” he said at a rally, adding that the deal was nonetheless unfavorable to the US.

Other candidates gave credit to a higher authority (though Trump might quibble with that ranking). “Praise God!” Senator Ted Cruz tweeted . Another Republican candidate, former Arkansas governor Mike Huckabee, had the same reaction, also tweeting , “Praise God!” Rubio chimed in on Twitter, too: “Thankful that prayers have been answered” he said .

But it wasn’t god that negotiated the release for the US: it was Brett McGurk, a senior State Department official who normally works on managing the anti-Islamic State coalition. He and his counterpart, an Iranian intelligence official, according to reports , worked through a channel that had been established in late 2014 and picked up steam after the nuclear deal was struck in July 2015.

And it wasn’t the prayers that got Rezaian and company home. It was a compromise. Yes, the US had to give up something it wanted – to pursue the various sanctions busters it let go to the fullest extent of the law – but the administration judged that bringing back American prisoners held abroad was more important.

Compromise, however, is anathema to Obama’s opponents. It’s not very surprising that the Venn Diagram of critics of the nuclear deal and critics of the prison swap consists of two almost perfectly overlapping circles. Neoconservative and their right-wing allies hate diplomacy with Iran – all of it. They always want no compromises, no exceptions.

The breathless opposition to the prisoner swap suggests that perhaps the Obama administration was correct to negotiate in secret. A public process would’ve been susceptible to the many disingenuous, dishonest and, at times, downright conspiratorial attacks; it’s not clear that such delicate talks, which already reportedly faced considerable stumbles, could have survived.

With so much progress having been made on the nuclear side since talks were announced publicly in the autumn of 2013, it is sometimes difficult to remember that Congress repeatedly came within a hair’s breadth of killing negotiations with new sanctions that they knew violated the deal’s tenets.

And, if critics in Congress had managed to kill the prisoner swap before it happened, that would have left us with an unsavory outcome: five Americans would have remained in Iranian detention for who-knows-how long.

That there were few other viable alternatives to the prisoner swap seems obvious from the alternatives that the right offered: basically nothing.The closest thing to a Plan B I saw was a March letter from 17 Senate Republican hawks, led by presidential hopeful Marco Rubio, urging the administration to “demand the unconditional release of these Americans.” It’s almost as if they believed that simply shouting Let my people go! would have done the trick.

Come to think of it, maybe the Republican hawks really do think that God is at the helm of American foreign policy . But Jesus, take the wheel often results in car accidents ; given how dangerous the Iran nuclear crisis was on the path to becoming, I, for one, am glad it’s Obama who was in charge.

The right-wing media apparatus, which is global in scale, has lately been making a fetish of something called "critical race theory" (CRT). This has prompted academics to defend it. It's not a radical political ideology, they say. It's merely a form of critical inquiry. It is not the boogeyman it's being made out to be. There's nothing to fear.

MSNBC's Leigh Ann Caldwell reports that the first stop on Marjorie Taylor Greene and Matt Gaetz's "America First" tour will be at The Villages, a retirement community in Sumpter County, Florida.

"What this essentially is, is a fundraising tour for their joint political committees for them to raise money," Caldwell said this Friday. "Marjorie Taylor Greene has proven that she's an excellent fundraiser, although she's spent a lot of money to actually raise those funds."