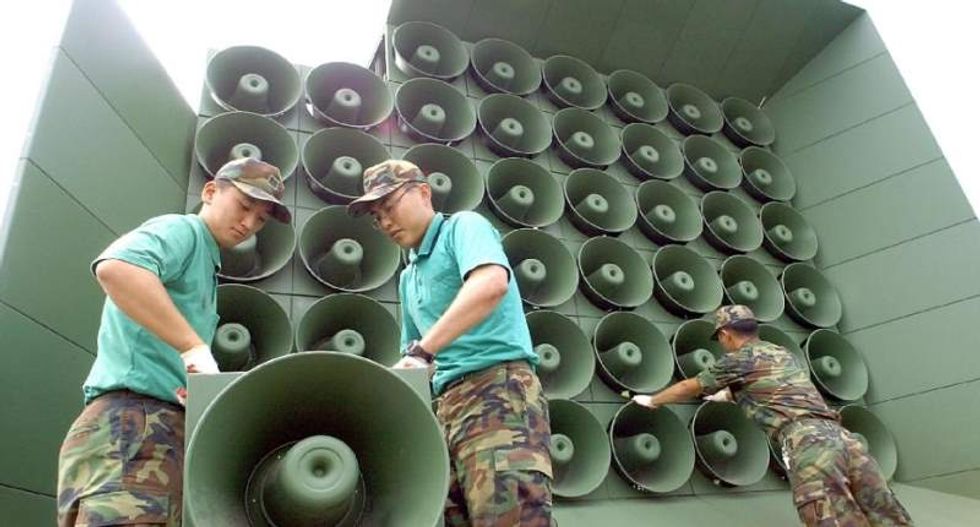 Resumption of cross-border broadcasts, which blare out an eclectic mix of everything from K-pop and weather forecasts to snippets of news and critiques of the North Korean regime, revives psychological warfare tactics that date back to the 1950's (AFP Photo/Kim Jae-Hwan)

South Korea on Friday resumed high-decibel propaganda broadcasts into North Korea as the United States ramped up pressure on China to bring Pyongyang to heel after its latest nuclear test.

The moves came as the international community scrambled to find common ground on how best to penalise the North following its shock announcement two days ago that it had successfully tested its first hydrogen bomb.

The resumption of the cross-border broadcasts, which blare out an eclectic mix of everything from K-pop and weather forecasts to snippets of news and critiques of the North Korean regime, revives psychological warfare tactics that date back to the 1950-53 Korean War.

But they can be remarkably effective.

Their use during a dangerous flare-up in cross-border tensions last year infuriated Pyongyang, which at one point threatened artillery strikes against the loudspeaker units unless they were switched off.

The South finally pulled the plug after an agreement was reached in August to de-escalate a situation that had brought the two rivals to the brink of an armed conflict.

Now they are back -- punishment for Wednesday's surprise nuclear test, which triggered global condemnation and concern, despite expert opinion that the yield was far too low to support the North's claim that the device was an H-bomb.

The test set off a diplomatic frenzy as the UN Security Council met to discuss possible sanctions and world leaders sought to build a consensus on an appropriate response to such a grave violation of UN resolutions.

Most eyes were on North Korea's main ally, China, which condemned the test but gave no signal that it was ready to approve a significant tightening of sanctions on its recalcitrant neighbour.

In a phone call with his Chinese counterpart Wang Yi on Thursday, US Secretary of State John Kerry insisted that Beijing's softly-softly line had failed and it was time to take a tougher stance with Pyongyang.

"Now China had a particular approach that it wanted to make and we agreed and gave them time to implement that," Kerry told reporters.

"But today in my conversation with the Chinese I made it very clear that that has not worked and we cannot continue business as usual."

While Beijing has restrained US-led allies from stronger action against Pyongyang in the past, it has shown increasing frustration with its refusal to suspend testing.

But China's leverage over Pyongyang is mitigated, analysts say, by its overriding fear of a North Korean collapse and the prospect of a reunified, US-allied Korea directly on its border.

On Thursday, President Barack Obama also spoke with the leaders of the two main US allies in Asia -- and North Korean neighbours -- South Korea and Japan.

The three countries, who have long sought to project a united front against the North Korean nuclear threat, agreed to work together at the United Nations to secure the strongest possible Security Council resolution.

North Korea, meanwhile, has said virtually nothing since its TV broadcast at noon Wednesday announcing the "world startling event" of its latest test.

The test, personally ordered by leader Kim Jong-Un, was of a miniaturised H-bomb, Pyongyang said, adding that it had now joined the ranks of "advanced nuclear nations".

Although there is still widespread speculation over what device the North actually did test, international experts mostly concur that it could not have been a full-scale thermonuclear device as claimed.

The yield from Wednesday's explosion was initially estimated at six kilotons, whereas a two-stage H-bomb would be expected to release 1,000 times more energy.

Nevertheless, the test was seen as a major cause for concern, with some experts suggesting it may have been a boosted-fission device, which would mark a significant step up from the North's three previous tests in 2006, 2009 and 2013.