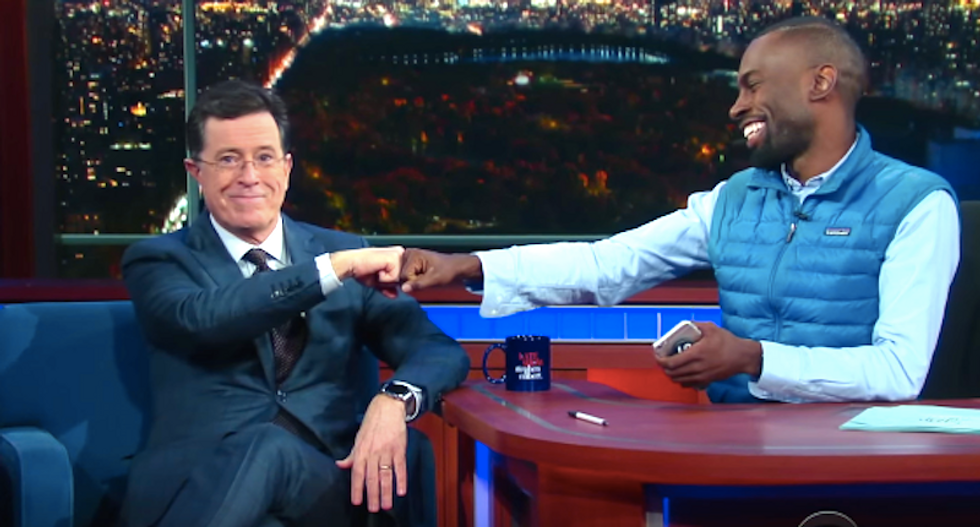 The "Late Show" host recalled when he slipped on a bracelet worn by the Black Lives Matter movement's supporters, and he said the viewer backlash was so severe that "you would have thought I'd slapped a baby."

"I think that people are uncomfortable talking about the racist history of this country and what we need to do to undo the impact of racism," McKesson said. "People would just like to act like we don't have a legacy of racism here. I think people get really uncomfortable with it, but we know that we can't change it unless we address it, right?"

McKesson, who wore his trademark blue quilted vest and kept his smart phone in his hand throughout the interview, said the "All Lives Matter" response was intended as a distraction.

McKesson said police culture encourages violence against black people, and he said the "blue code of silence" requires police officers to protect their own -- even when they engage in wrongdoing.

"Across the country it has been so similar, we know that it's not just isolated events," he said. "It is actually a systemic problem."

He agreed that police work -- like many other professions -- was dangerous, but he said only police officers are given the power to kill people.

"That means they have a different responsibility and accountability that is not present right now," McKesson said.

Colbert asked McKesson to reflect on the Rev. Martin Luther King Jr. on the federal holiday set aside in his honor.

"People misremember King today," McKesson said. "They remember, like, the safe King -- they don't remember, like, the radical revolutionary King. He talked about redistribution of wealth and economic justice -- he was more aggressive than the dream that people remember."

"The issues are the same," he said. "We didn't invent resistance, we didn't discover injustice, but technology has allowed us to amplify these issues in ways that we couldn't before and has accelerated the pace of organizing in ways that are really powerful."

McKesson promoted Campaign Zero -- a 10-point platform to end police violence through changes in union contracts and department policies on use of force.

McKesson said he attended Sunday's Democratic debate in South Carolina, and he thought the candidates were asked the most substantive questions on race that they had faced so far during the campaign.

"We have an acknowledgement about these issues as systemic issues, now we just have to figure out what they plan to do about them," he said. "We heard Hillary acknowledge white privilege, which she's never done before, we heard Bernie continue to talk about systemic injustice -- and (Martin) O'Malley (has) still got some work to do."

Colbert asked McKesson to help him recognize his own white privilege, and the host agreed that his TV show and salary granted him many advantages.

"It's about role, and it's about access -- and what you can do is extend that privilege so that you can dismantle it, right?" McKesson said. "You can create opportunity for people, you can amplify issues in ways that other people can't and you can use your resources to create space for people."

Colbert invited his guest to switch seats, and they continued their discussion about whiteness.

"I can't speak for other white people, (but) I feel guilty for anyone who does not have the things I have," Colbert said. "That includes black people or anyone, because I am so blessed -- I think there's always a fear that it will be taken from me."