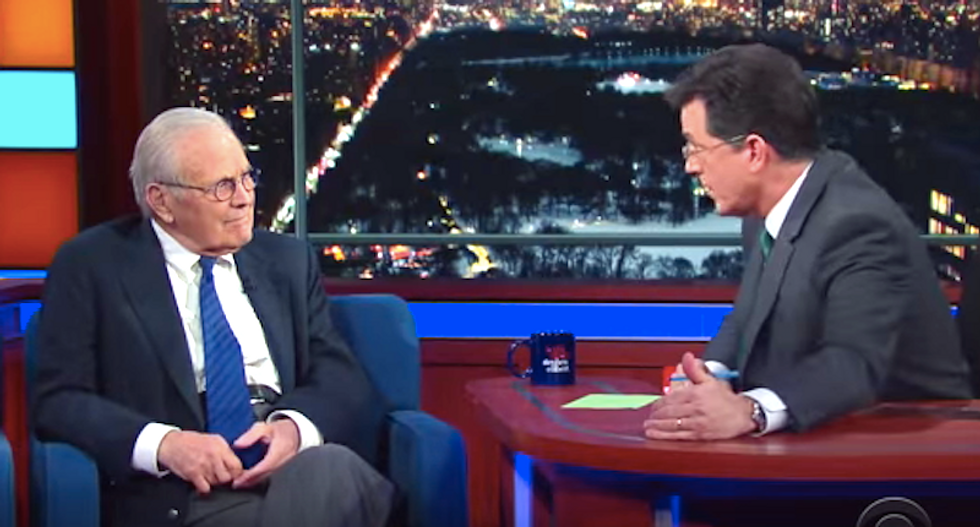 Stephen Colbert grilled Donald Rumsfeld over the decisions -- and dishonesty -- that pushed the United States into the disastrous war in Iraq.

The "Late Show" host said he thought it was unfair to ask Rumsfeld and other former Bush administration officials if they would invade Iraq if they knew then what they know now about Saddam Hussein's weapons of mass destruction.

"You only knew then what you knew then, (and) you only know now what you know now," Colbert said. "Our now is tomorrow's then."

Rumsfeld seemed relieved that he would not ask that, but Colbert still made the former Secretary of Defense squirm with an arguably tougher question.

Colbert suggested a fourth option: "the unknown knowns -- which (are) the things that we know, and then we choose not to know them or not let other people know we know."

The audience laughed -- but they began to applaud as Rumsfeld seemed to realize he was not about to be let off the hook, after all.

"I'm going to save you embarrassment," Rumsfeld said, as Colbert briefly paused to formulate a simple question from a complex set of facts.

"You don't have to do that," Colbert quickly countered. "I can't be embarrassed -- I'm a comedian."

Colbert continued with his question by pointing out a recently declassified 2002 memo from the Joint Chiefs of Staff that shows up to 90 percent of U.S. knowledge of Iraqi weapons programs at the time was based on "imprecise intelligence."

The talk show host said this showed Bush administration officials believed there were weapons of mass destruction -- but they had no hard evidence of their existence.

"I believe that sincerely -- I don't think anybody made up the belief that there were weapons of mass destruction," Colbert said, as Rumsfeld insisted those beliefs were sincere. "That is cynicism beyond what I would ever want to think of my government."

"I believe that everybody believed that they were there, but there was no hard proof that they were there," he continued. "And yet it was presented to the American people as if there was. So there was an unknown known for the American people. It was known that there was not hard evidence, but we were presented a partial picture -- and that's the unknown known that we were denied. Do you think that was the right thing to do?"

Rumsfeld said that memo had been posted on his website years ago, but Colbert pressed on.

"Were there things that the administration or you knew that we didn't learn about out of the best possible intentions -- which is, there were things that would undermine the case for a war you thought was necessary to save the United States," Colbert said.

"The president had available to him intelligence from all elements of the government, and the National Security Council members had that information," Rumsfeld said. "It was all shared, it was all supplied, and it's never certain -- if it were a fact, it wouldn't be called intelligence."

The notoriously slippery Rumsfeld paused for a moment to let his explanation sink in, and Colbert marveled at his own accomplishment.

"Wow," he said. "I think you answered my question."

Earlier in the interview, Colbert had asked Rumsfeld about Donald Trump, and the former Bush administration official said he thought the Republican presidential frontrunner and Democratic challenger Bernie Sanders had clearly tapped into the anger and mistrust many voters feel toward their government.

But Rumsfeld seemed to have no recognition for his own role in undermining that civic trust.

"I think there's always a risk that people looking at government will come to conclusions that they may not be right," Rumsfeld said. "That's why we have a democracy. I mean, that's why people vote, and they make judgments."

"I think most people in the United States understand that government's not perfect -- look how long it takes to get snow removed," he continued. "But, on the other hand, I think that what's really important are the intentions and the capabilities of the people, and for the most part -- I think it was Churchill that said that democracy's the worst form of government except for any other that's ever been tried."

Watch the entire interview posted online by The Late Show With Stephen Colbert: