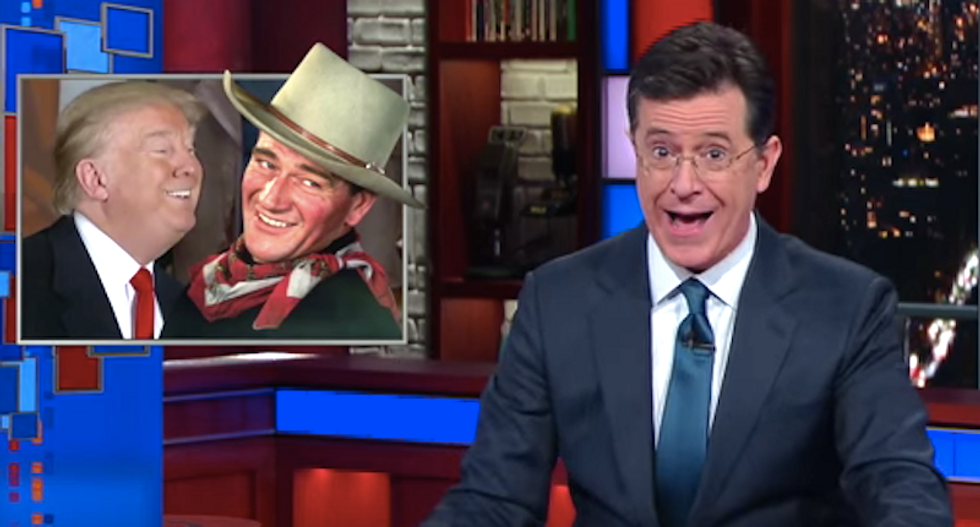 Stephen Colbert ripped Donald Trump's blatant and disingenuous pandering to evangelical Christians and his bizarre endorsement by the ghost of John Wayne.

The real estate tycoon and reality TV star gave a boastful convocation speech earlier this week at Liberty University, where he told students that he ranked his own book, "Art of the Deal," just behind the Bible in quality and importance.

"Trump loves the Bible so much he doesn't even need to read it," Colbert said.

The Republican presidential frontrunner drew laughs from students by mispronouncing 2 Corinthians as "Two Corinthians" -- rather than "Second Corinthians."

"Saying 'Two Corinthians' is like saying 'The Book of Job,'" Colbert said, making the aggrieved biblical figure's name a homonym for the work Trump warns that immigrants will steal from Americans. "The Mexicans are coming here into our country to steal our book of jobs. But 'the pander express' did not stop there."

Trump also gave an interview to the Christian Broadcast Network's David Brody, who asked the celebrity billionaire if he ever cried. Trump, of course, said he wasn't "a big crier."

"Real men don't cry," Colbert said. "Donald Trump is a real man. How do we know? Because he just got endorsed by the manliest man who ever manned."

Trump received an endorsement this week from John Wayne's daughter, which she announced alongside the candidate and standing before a wax figure of her late movie star father.

"That's right, with his newfound spirituality, Trump has reached with his golden hand through the veil of death and dragged back the endorsement of John Wayne -- the Duke, the toughest man not alive," Colbert said. "For anyone who doubts this endorsement, consider this: If John Wayne were alive, he would be a 108-year-old white guy -- and that sounds like a Trump voter to me."