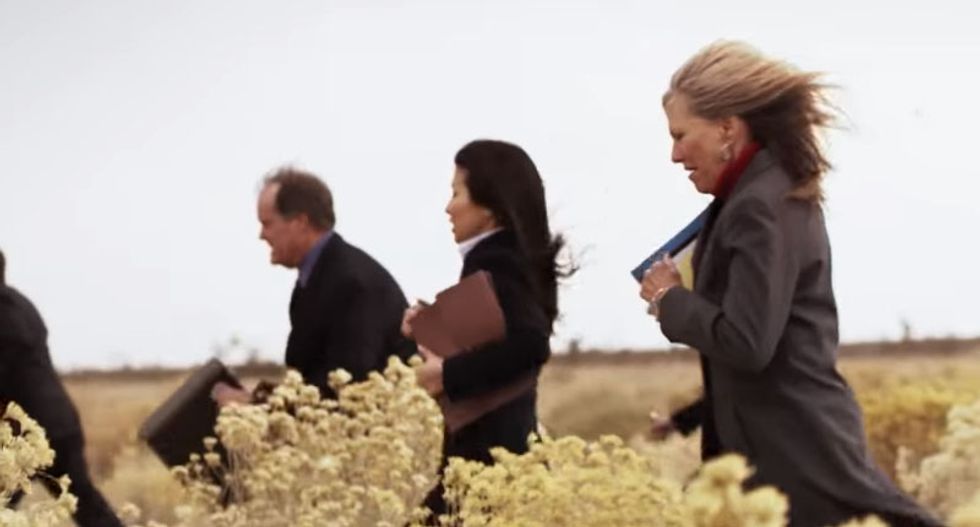 An image from a Ted Cruz advertisement (Screenshot)

Ted Cruz's presidential campaign is launching its first major TV ad in New Hampshire, a dramatic commercial that seeks to shore up his border security credentials in a Republican primary race that has been dominated by the issue for months.

Titled "Invasion," the 60-second ad draws on remarks the U.S. senator from Texas made during the fourth GOP debate, when he discussed what he described as the overlooked impact of illegal immigration on American jobs. As Cruz speaks, the ad shows men and women in business clothes frantically running across the border.

"The politics of it would be very, very different if a bunch of lawyers or bankers were coming across the Rio Grande ... or if a bunch of people with journalism degrees were coming over and driving down the wages in the press," Cruz says in the spot. "Then we would see stories about the economic calamity that is befalling our nation."

The ad starts airing across the Granite State on Tuesday, according to Cruz's campaign.

In addition to the businesspeople, the ad features a shot of one of Cruz's rivals for the GOP nomination: U.S. Sen. Marco Rubio of Florida, whom Cruz has sharply criticized for his involvement in immigration reform efforts in 2013. In the ad, Rubio is briefly shown listening at the debate, which was held Nov. 10 in Milwaukee, as Cruz promises to "triple the Border Patrol" as president.

The ad comes as Cruz's closest competition in the Granite State and other early voting states, billionaire Donald Trump, continues to rouse audiences with his incendiary rants against illegal immigration and repeated vows to build a wall on the southern border. More recently, Trump has taken to calling Cruz a copycat on the issue, a claim the Texas senator refused to directly address with reporters while campaigning Monday in Iowa.

In some ways, the ad also kicks off the homestretch of Cruz's campaign in the Granite State, a place at least one of his GOP opponents has suggested he is writing off ahead of its Feb. 9 primary. But Cruz's team has made clear that's not the case, opening a residence for volunteers there similar to the one it has in Iowa and planning a bus tour of New Hampshire later this month.

Cruz's campaign has previously been on the air in New Hampshire with two minor spots, including an ad during the first GOP debate in September that used a scorpion to portray the peril of Islamic terrorism.