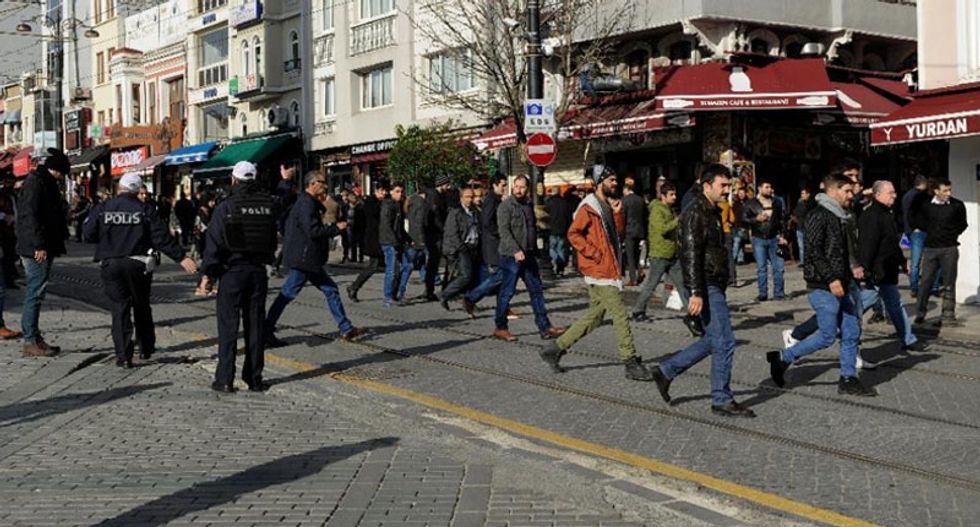 Police move people on as they secure an area at the historic Sultanahmet district of Istanbul after an explosion on January 12, 2016 (AFP Photo/)

Ten people, mostly foreigners, were killed on Tuesday when a Syrian suicide bomber blew himself up in Istanbul's busiest tourist district, in the latest deadly attack to hit the country.

Images showed several mutilated corpses lying on the ground close to the iconic Ottoman-era Blue Mosque in Sultanahmet, a district which is home to Istanbul's biggest concentration of historic monuments.

"I strongly condemn the terror attack which was carried out by a suicide bomber of Syrian origin," Turkish President Recep Tayyip Erdogan said in a speech in the capital Ankara.

Deputy Prime Minister Numan Kurtulmus said most of the dead were foreigners, but did not give details on their nationality. He identified the bomber as a Syrian national born in 1988.

Speaking in Berlin, Chancellor Angela Merkel said that German nationals were "probably" among the victims.

"We don't have all the information yet... but we fear that German citizens could be and probably are also among the victims and injured," she told reporters.

Shortly after the blast, Germany had warned its nationals to avoid tourist sites in Istanbul, a city of 14 million that has been hit several times by deadly attacks.

Police and ambulances raced to the scene, throwing up a tight security cordon around the area as helicopters hovered overhead, and crowds of worried locals and tourists clamoured to find out what had happened, an AFP correspondent said.

The explosion took place at around 0820 GMT by the Obelisk of Theodosius, a monument from ancient Egypt which was re-erected by the Roman Emperor Theodosius and is one of the city's most eye-catching monuments.

It stands just outside the Blue Mosque.

Turkey has been on high alert after a series of attacks blamed on the Islamic State jihadist group including a double suicide bombing in October in Ankara that killed 103 people.

The explosion was powerful enough to be heard in adjacent neighbourhoods, witnesses told AFP. Police cordoned off the area to shocked passers-by and tourists and the nearby tram service has been halted.

"The explosion was so loud, the ground shook. There was a very heavy smell that burned my nose," a German tourist called Caroline told AFP.

"I started running away with my daughter. We went into a nearby building and stayed there for half an hour. It was really scary," she said.

"I heard a very loud blast, then came the screams," said a Turkish man who did not want to be identified.

"Then I saw a ball of fire, and started to run away. I saw about 10 people wounded, one of them was being helped by the tourists.

The authorities imposed a broadcast ban on reporting of the attack, prompting television channels to halt live broadcasting from the scene although factual commentaries continued.

Immediately after the blast, Prime Minister Ahmet Davutoglu convened an emergency security meeting with key ministers and officials, among them Interior Minister Efkan Ala and spy chief Hakan Fidan.

The Istanbul governor's office said an investigation was under way to identify the type of explosive used and any others involved in the attack.

"Investigations into the cause of the explosion, the type of explosion and perpetrator or perpetrators are under way," it said.

Turkey has been on alert since October 10 when two suicide bombers blew themselves up in a crowd of peace activists in Ankara in the bloodiest attack in the country's modern history.

That attack was blamed on IS jihadists, as were two other deadly bombings in the country's Kurdish-dominated southeast earlier in the year.

Turkish authorities have in recent weeks detained several suspected IS members, with officials saying they were planning attacks in Istanbul.

"The style of the attack, a suicide bomber and the attack, a group of tourists, suggests a jihadist attack," a Western diplomat told AFP.

"If this is the case, it's a sign that Daesh has decided to attack the Turkish state," he added, using an Arabic acronym for IS.

But Turkey is also waging an all-out assault on the outlawed Kurdistan Workers' Party (PKK) which has staged dozens of deadly attacks against members of the security forces in the southeast.

A Kurdish splinter group, the Freedom Falcons of Kurdistan (TAK), claimed a mortar attack on Istanbul's second international airport on December 23 which killed a female cleaner and damaged several planes.

Lincoln Project co-founder and former GOP strategist Steve Schmidt wants the United States to strip Rupert Murdoch of his U.S. citizenship, calling the 91-year-old Australian-born media titan "the most venomous and dangerous foreigner to ever arrive on American soil."

Murdoch is the man behind News Corp, a massive multi-national conglomerate that in the U.S. owns Fox News, The New York Post, the Wall Street Journal, book publisher HarperCollins, and even realtor.com.