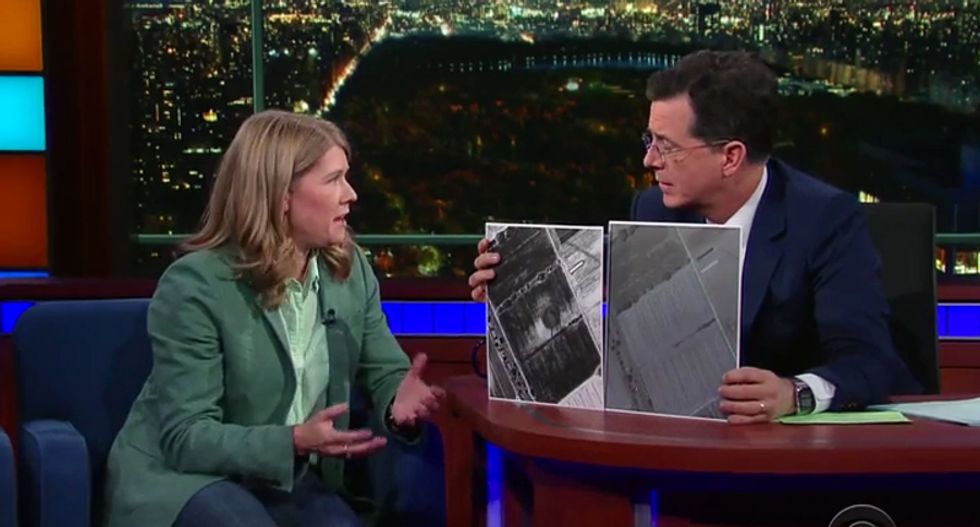 Talking a break from celebrity chit-chat, Late Show host Stephen Colbert welcomed 'space archaeologist' Sarah Parcak to his show to discuss how she uses high-resolution photography of Earth taken from space to search for lost pyramids and towns buried beneath Earth's surface.

Parcak, an associate professor of Anthropology and director of the Laboratory for Global Observation at the University of Alabama, recently was awarded the 2016 $1 million TED Prize for her talk on how she uses satellite imagery to discover below-surface ruins.

Her TED talk can be seen below.

Describing her work as if "Indiana Jones had a lovechild With Google Earth," Parcak described finding the sites of 17 potential pyramids in Egypt, 3,100 missing settlements, and over a thousand lost tombs.

Indicating a photo she said shows an ancient amphitheater in Rome, Parcak explained, "Processing the satellite data and looking for subtle differences in vegetation health, which you literally cannot see visibly, we're able to map this, about 120 feet across."

According to Parcak, by looking at for subtle differences in the light spectrum surrounding plants, she can tell if there are anomalies below the surface that may indicate ruins. This allows archaeologists to pinpoint exactly where to look.

Colbert grew uncontrollably excited when she shared imagery of what lies beneath the city of Tanis, where film's Indiana Jones discovered the clues to the Ark of the Covenant within the secret chamber known as the Well of the Souls.