Will Smith joins boycott against Academy Awards' lack of diversity 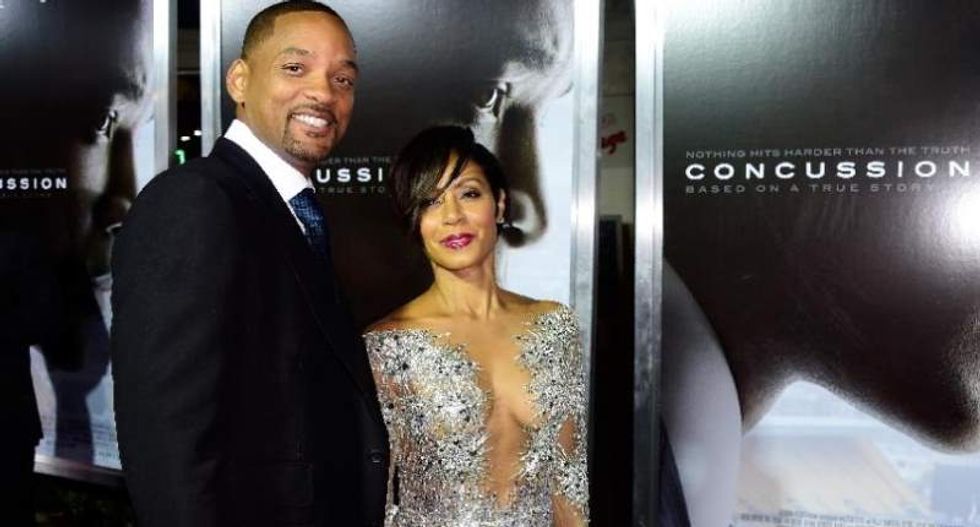 Will Smith (L) and Jada Pinkett Smith arrive at the screening of Columbia Pictures' 'Concussion' on Nov. 23, 2015 in Westwood, California. (Agence-France Presse/Frazer Harrison)

Actor Will Smith said Thursday he will not attend next month's Oscars ceremony, joining his wife Jada Pinkett Smith and director Spike Lee to protest the absence of minorities among the acting nominees.

For a second year in a row, the Academy of Motion Picture Arts and Sciences nominated only white actors for the 20 slots, causing an outcry. The issue is likely to be front and center when the Academy's board meets on Tuesday.

Smith, a mega-star whose role in NFL drama "Concussion" was overlooked this year, said he was out of the country when his wife announced on social media that she would not attend the February 28 awards ceremony in Hollywood.

"She's deeply passionate and when she is moved she has to go," Smith said in an interview on ABC's "Good Morning America" show. "I heard her words and I was knocked over. I was happy to be married to that woman."

"There is a position that we hold in this community, and if we're not part of the solution, we're part of the problem," said Smith, a two-time Oscar nominee for his roles in "Ali" and "The Pursuit of Happyness."

"It was her call to action, for herself, and for me and for our family to be a part of the solution."

Smith said America's diversity was one of its strength, and should be reflected in film.

"Everyone is beautiful and deserving and is fantastic, but it feels like it's going the wrong direction," he said of this year's nominations list.

"There is a regressive slide towards separatism, towards racial and religious disharmony and that's not the Hollywood that I want to leave behind."

Lee has said he and his wife will be skipping the ceremony too, though he has said he is not calling for a wider boycott.

Lee, who won an Oscar last year honoring his lifetime achievements as a moviemaker, wrote an open letter to the academy Monday decrying the "lilly white" acting nominations.

Lee says the bias lies with the studio executives who decide which movies get made -- a point others have made as the #OscarsSoWhite backlash mounts.

Lupita Nyong'o, who won a best supporting actress Oscar for "12 Years A Slave" two years ago, said on Instagram: "I stand with my peers who are calling for change in expanding the stories that are told and recognition of the people who tell them."

Oscar-winning actor George Clooney, warning the movie industry is moving backwards, said this week the problem was the lack of options available to minorities in quality films.

Academy president Cheryl Boone Isaacs, who is black, said she was "both heartbroken and frustrated about the lack of inclusion."

Industry magazine Variety suggested a change to the body's membership rules could be on the table when the board meets next week.

The Academy has some 6,000 members, all of whom work in the film industry and are elected by their peers for life. According to a 2012 study by the Los Angeles Times, nearly 94 percent of the Academy voters are white and mostly male.

Oscar nominee Mark Ruffalo -- up for a golden statuette for his role in "Spotlight," about journalists at the Boston Globe who uncovered sexual abuse in the Catholic Church -- had hinted at the idea of not attending but tweeted he would.

"I will be going to the Oscars in support of the victims of clergy Sexual Abuse and good journalism," said Ruffalo, who is white.

"I do support the Oscar Ban movement's position that the nominations do not reflect the diversity of our community."