Antonin Scalia was only an 'originalist' when it was convenient 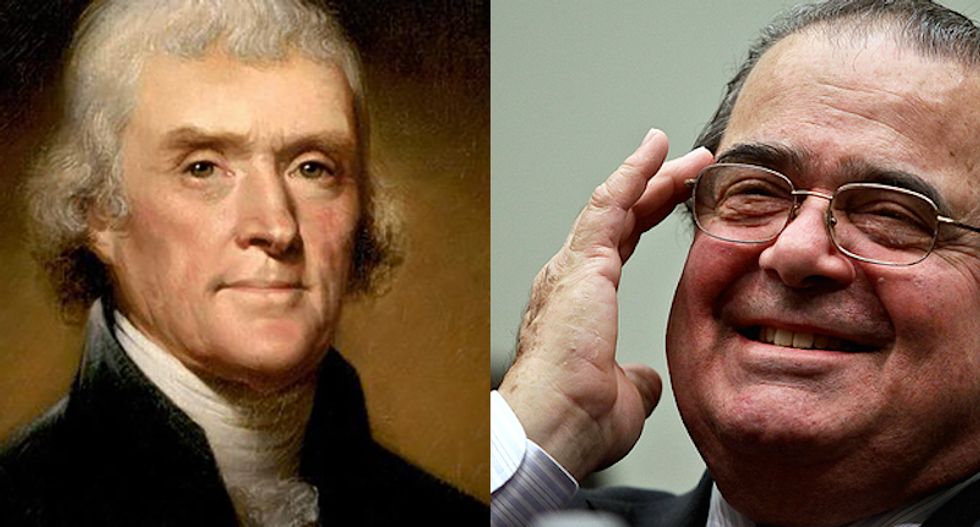 The Supreme Court’s creation of new religious rights for closely-held corporations, Burwell, Secretary of HHS v. Hobby Lobby, makes clear that while Antonin Scalia is winning his career-long war for more governmental accommodation of religion, he is doing it by silently consenting to the further dismantling of one of his most important decisions, Employment Division v. Smith.

The Hobby Lobby decision follows the logic of Citizens’ United in arguing that corporations, which have been ruled to have protected Free Speech rights for election campaign donations, now have the right to ignore portions of a federal law if they are “closely held corporations,” whose owners object to the law on religious grounds.

But I wonder whether the people that Scalia seeks to channel for this understanding, using his historical originalism theory to divine what the people in the state ratifying conventions of the Constitution in 1788 or the Bill of Rights in 1791 understood those words to mean, would agree? Under the Bill of Rights, would those Founding-era people have agreed with the majority in Hobby Lobby that the religious rights of the owners of corporations trump the constitutional rights of their workers to exercise their personal autonomy privacy right to choose their own form of family planning? In Scalia’s historical originalist terms, if there had been a tea shop run by two former employees of the British East India Company in Charlottesville, Virginia in 1791, would Thomas Jefferson and James Madison have agreed that under the First Amendment religion clauses its owners could have imposed their Church of England religious views on their American employees in opposition to a federal law dealing with the personal autonomy choices of their workers? Of course not. It is hard to imagine that the same people who fought and won a revolution against the economic enterprises of King George III and Parliament, believed that the Bill of Rights were intended to protect the free speech and religion rights of such corporations.

At issue in Hobby Lobby is just how protective of religious rights the Court will be in applying the First Amendment’s Free Exercise of Religion clause. Prior to 1990, the Court used a complicated “compelling state interest” and “least restrictive means” test, requiring that the state make an exception to its law if that regulation “substantially burdened” a “central” belief in a person’s religion, unless the state could demonstrate that there was no other way to achieve its aim. The complication was that despite what seemed to be a balance here that favored protecting religious rights, Justice Sandra Day O’Connor always provided the fifth vote in favor of state regulation, because she argued that the laws did not affect “central” religious views.

Scalia changed the standard in a 1990 case called Employment Division v. Smith, dealing with the firing of a Native American who was a drug counselor for a private company and who ingested peyote for religious reasons, thus was denied his right to receive unemployment benefits from the state. Ignoring that using peyote was a central part of some Native Americans’ religion, Scalia returned to a much older “secular regulation rule,” under which general state regulations, that applied to everyone equally and did not target specific religious groups, would be upheld if they were “reasonable.” Contrary to Hobby Lobby, in which the Court animates corporations in order to protect their religious rights, Scalia allowed Oregon’s anti-drug law to operate regardless of its religiously discriminatory effect on the Native American litigant’s religion.

But, by his own description a “faint-hearted originalist” who upheld key precedents at times, Scalia also held that the higher level, religious rights protective exception could be used in certain situations, such as when the Court considered a “hybrid case,” raising more than one constitutional issue, or if the states or Congress passed a law imposing the more protective standard. In the 1993 Religious Freedom Restoration Act (RFRA), Congress restored the higher level, “compelling interest” rule, thus protecting persons whose religious rights were “substantially burdened.” While the Court four years later overturned this law when it applied to state governments, it later upheld its application to the federal government. Since then, the Court has repeatedly added exception after exception expanding the use of the higher level test elsewhere, thus piecemeal limiting the reach of Scalia’s Smith holding and, as Justice Ruth Bader Ginsburg argued in dissent, extending religious protections under Congressional law that go far beyond what it had found for decades under the First Amendment itself. Since the Obama administration had allowed for exceptions to its contraception provision in the Affordable Care Act to some religiously-affiliated facilities, its argument for being unable to grant an exception to Hobby Lobby was doomed to lose once the Court ruled that this corporation was a protected person.

When I teach about the First Amendment Free Exercise of Religion at Lafayette College, which used to occupy a routine pair of classes, I now wheel into the classroom a large white board that will occupy us for weeks, filled with all of the exceptions that the Court has created here restoring, in piecemeal fashion, the pre-Scalia, 1990 decision, world. I explain what has become the “Swiss Cheesing” of the First Amendment’s Free Exercise clause, allowing, among others, for claims to be considered for exceptions for federal prisoners and others being held in government institutions, for a religious group in Hialeah, Florida seeking to sacrifice animals in religious ceremonies, and for a small religious group seeking to drink ceremonial hallucinogenic tea from the Amazon. The string of exceptions to Scalia’s Smith rule has created so many holes that there is almost no cheese left. After the Hobby Lobby decision, I will have to make one more change to the top of my board, one which risks doubling the number of exceptions, adding next to the words “person’s Free Exercise of Religion rights,” the phrase “and closely-held corporations’ religious rights”

Even though the majority in Hobby Lobby has further limited Scalia’s Smith case holding, since that result comports with his pro-religious accommodation, pro-corporation constitutional rights, viewpoint, he silently votes with them. While Scalia likes to say in his public speeches that his version of the Constitution is “Dead. Dead. Dead,” once more his reading of Founding era history to construct his originalist interpretation of the Constitution is very much an evolving work in progress.

By Bruce Allen Murphy is the author of Scalia: A Court of One (Simon and Schuster, 2014) and is the Fred Morgan Kirby Professor of Civil Rights at Lafayette College in Easton, Pennsylvania.
- See more at: http://historynewsnetwork.org/article/156300#sthash.GQETcyBw.dpuf
Opinion
Report typos and corrections to: corrections@rawstory.com.