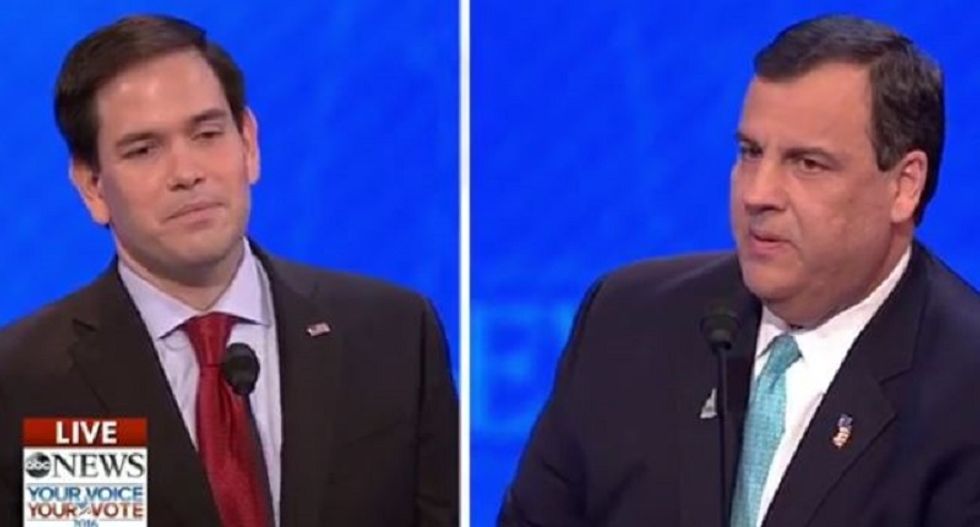 GOP candidate and New Jersey Governor Chris Christie slammed rival, Florida Sen. Marco Rubio, accusing him of memorizing speeches but having no grasp of how to actually govern during Saturday evening's GOP debate.

Christie accused Rubio of not understanding how to govern, saying, "See Marco, the thing is this. When you're president of the United States, when you're governor of a state, the memorized 30-second speech where you talk about how great America is at the end of it doesn't solve one problem for one person."

Christie continued to say Rubio's experience in the Florida Senate has not prepared him for governing the country.

"It's a fine job, I'm glad you ran for it," Christie said. "But it doesn't not prepare you for being president of the United States."

Transcript of the exchange, as provided by ABC, is posted below the video.

Watch Christie's comments, as posted to Twitter by ABC, here:

.@ChrisChristie to @marcorubio: Being senator "does not prepare you for president of the United States" #GOPDebatehttps://t.co/0rI1Po7WDA

You have not be involved in a consequential decision where you had to be held accountable. You just simply haven't.

And the fact is -- the fact when you talk about the Hezbollah Sanctions Act that you list as one of your accomplishments you just did, you weren't even there to vote for it. That's not leadership, that's truancy.

And the fact is that what we need to do -- what we need to have in this country is not to make the same mistake we made eight years ago. The fact is it does matter when you have to make decisions and be held accountable for them. It does matter when the challenges don't come on a list of a piece of paper of what to vote yes or no every day, but when the problems come in from the people that you serve.

I like Marco Rubio, and he's a smart person and a good guy, but he simply does not have the experience to be president of the United States and make these decisions. We've watched it happen, everybody. For the last seven years, the people of New Hampshire are smart. Do not make the same mistake again.

RUBIO: If I may respond to that.

RUBIO: Well, I think the experience is not just what you did, but how it worked out. Under Chris Christie's governorship of New Jersey, they've been downgraded nine times in their credit rating. This country already has a debt problem, we don't need to add to it by electing someone who has experience at running up and destroying the credit rating of his state.

But I would add this. Let's dispel with this fiction that Barack Obama doesn't know what he's doing. He knows exactly what he's doing. He is trying to change this country. He wants America to become more like the rest of the world. We don't want to be like the rest of the world, we want to be the United States of America. And when I'm elected president, this will become once again, the single greatest nation in the history of the world, not the disaster Barack Obama has imposed upon us.

MUIR: Senator Rubio, thank you. I want to bring in governor bush on this, because you...

CHRISTIE: Hold on one second.

CHRISTIE: I think he mentioned me and my record in there, so I think I get a chance to respond. You see, everybody, I want the people at home to think about this. That's what Washington, D.C. Does. The drive-by shot at the beginning with incorrect and incomplete information and then the memorized 25-second speech that is exactly what his advisers gave him.

See Marco -- Marco, the thing is this. When you're president of the United States, when you're a governor of a state, the memorized 30-second speech where you talk about how great America is at the end of it doesn't solve one problem for one person. They expect you to plow the snow. They expect you to get the schools open. And when the worst natural disaster in your state's history hits you, they expect you to rebuild their state, which is what I've done.

RUBIO: Chris -- Chris, your state got hit by a massive snowstorm two weeks ago. You didn't even want to go back. They had to shame you into going back. And then you stayed there for 36 hours and then he left and came back to campaign. Those are the facts.

RUBIO: Well, that's the -- that's the reason why this campaign is so important. Because I think this notion -- I think this is an important point. We have to understand what we're going through here. We are not facing a president that doesn't know what he's doing. He knows what he is doing. That's why he's done the things he's done.

That's why we have a president that passed Obamacare and the stimulus. All this damage that he's done to America is deliberate. This is a president that's trying to redefine this country. That's why this election is truly a referendum on our identity as a nation, as a people. Our future is at stake.

This election is not about the past. It is about what kind of country this is going to be in the 21st century, and if we elect someone like Barack Obama, a Hillary Clinton, a Bernie Sanders or anyone like that, our children are going to be the first Americans to inherit a diminishes country. That will not happen if I'm elected.

BUSH: Chris, why don't you mention my name so I can get into this.

CHRISTIE: And the fact is, I went back, it got done and here's...

RUBIO: You didn't want to go back, Chris.

CHRISTIE: Oh, so -- wait a second. Is that one of the skills you get as a United States senator ESP also? Because I don't think it is.

RUBIO: Chris, everybody -- you said you weren't going to go back. He told everyone he wasn't going to go back. They had to shame him into going back. And when he decided to go back, he criticized the young lady, saying, what am I supposed to do, go back with a mop and clean up the flooding?

CHRISTIE: It gets very unruly when he gets off his talking points.

MUIR: Governor Christie -- thank you, Governor. I will mention -- listen...