CNN pundit rips Trump aide: 'Katrina Pierson is one of the blacks he likes' since she 'cleans up his mess' 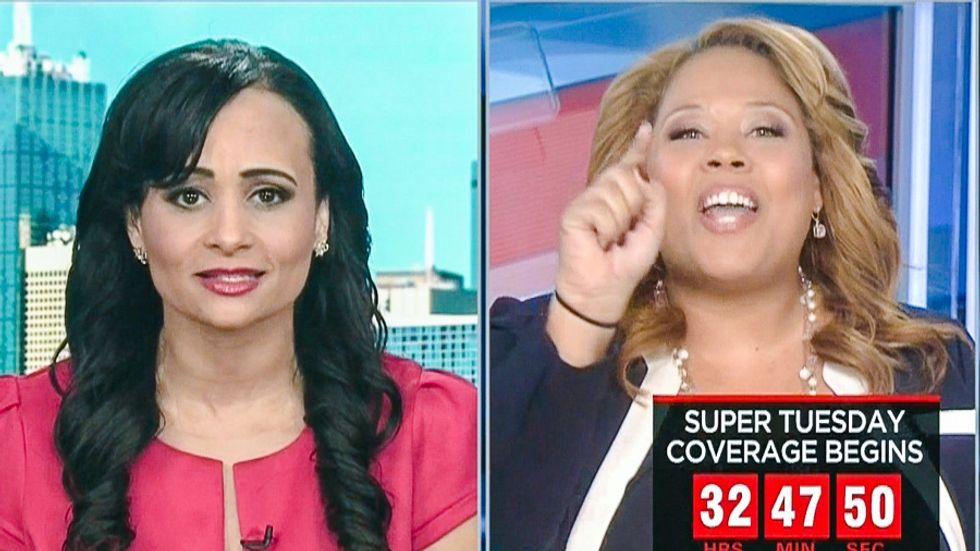 Republican strategist Tara Setmayer suggested on Monday that Donald Trump's spokesperson, Katrina Pierson, was "one of the blacks he likes since he pays her to clean up his mess everyday on television."

After Trump refused three opportunities to disavow support from the Ku Klux Klan and former Grand Wizard David Duke over the weekend, Pierson deflected the controversy on Monday by insisting to CNN host Carol Costello that "David Duke did not endorse Donald Trump."

"Mr. Trump said, look, I don't even know what you're talking about," Pierson insisted. "So, I think this has really been blown out of proportion. And it really does highlight more media bias when no one has asked Barack Obama to disavow Sen. Robert Byrd, who was not just a klans [sic] member, but a leader in the Klan when he endorsed him in 2008."

(According to Byrd's 2005 book, he had disavowed the Ku Klux Klan decades prior to endorsing then-Sen. Obama in 2008.)

"He brags about how he can manipulate folks," she observed. "We sit and we watched this play out over the weekend, where Donald Trump took five different positions because he got pressured into having to actually admit to what was going on. David Duke absolutely came out and said it's against your heritage if you don't vote for Donald Trump, okay. That's an endorsement. Give me a break."

"And then to say, I couldn't hear what was going on, they gave me a [bad] earpiece," Setmayer continued. "Anyone who watched the interview with Jake Tapper, Donald Trump clearly heard everything that Jake Tapper said. He responded to it. He didn't say, 'Oh, I can't hear you, this isn't a good earpiece.'"

"The Democrats have called the Tea Party racists!" Pierson shot back. "Should we have him disavow the Tea Party too? Absolutely not!"

Costello pointed out that Trump said "clearly" during the Sunday interview that he did not know who David Duke was, even though he previously had spoken out against the white supremacist.

"We aren't even talking about Donald Trump's questionable history with race back to when the DOJ sued the Trump organization for racial discrimination," Setmayer noted. "Or when Donald Trump came out and said how much he loves -- quote -- 'the blacks' or we can go down the list of very questionable things Donald Trump has said."

"But I don't know," the GOP strategist quipped, snapping her fingers. "Maybe Katrina Pierson is one of the blacks he likes since he pays her to clean up his mess everyday on television."

The jab at Pierson was strikingly similar to the definition for Uncle Tom: "a black person who is eager to win the approval of white people and willing to cooperate with them."

But Pierson got in the last word.