Feminist icon Gloria Steinem to Bill Maher: 'Home is still the most dangerous place for a woman' 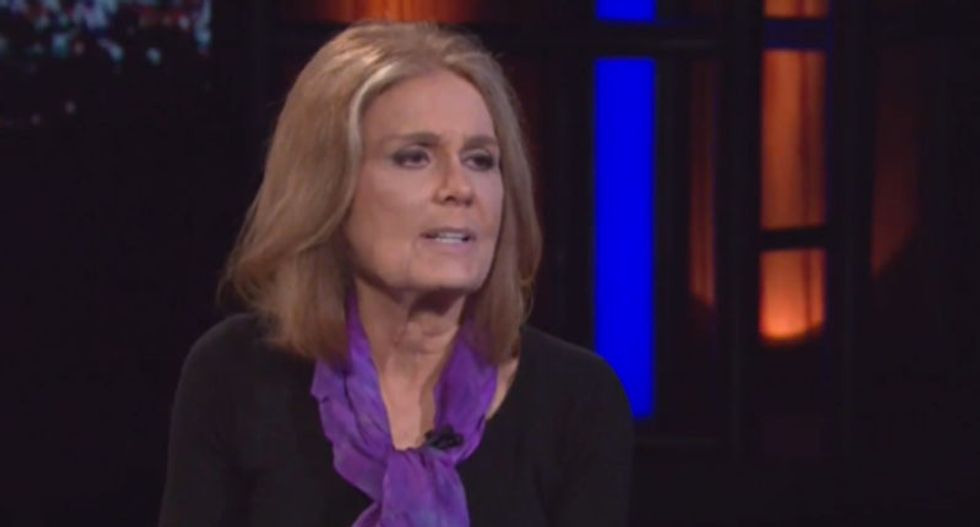 In a wide ranging -- and alternately serious and funny -- interview with HBO host Bill Maher, feminist icon Gloria Steinem addressed the myth that a woman can "have it all," saying that is impossible for both men and women.

Steinem is promoting her new book, "My Life on the Road," saying that it where she has spent most of her time.

"The road used to be a male province for no good reason. It should be everybody's place, " she explained. "But also the road was thought to be more dangerous. But, statistically speaking, home is the most dangerous place for a woman," she added, alluding to domestic violence.

Host Maher jumped in to joke, "Because they live with the guys you see on 'Cops.'"

Speaking of women "having it all," Steinem called the notion "stupid."

"First of all, you can't have it all if you have to do it all," she explained. "Usually that's what it means to a lot of women because they have to do the whole thing, children and everything. We just have to be able to use our talents and do what we want."

Addressing her years fighting for female equality the 81-year-old feminist spoke about how each generation fights their own battles and sometimes don't give credit to the ones who fought for womens' rights before them.

Jokingly describing her early feminist years as "We were twelve crazy ladies and now it's the majority," Steinem gave credit to the current generation for taking feminism in new directions -- beyond a woman's right to choose.

"I do think that gratitude never radicalized anybody," she explained. "I did not say 'thank you for the vote.' I got mad on the basis of what was happening to me. And I think that is true of young women too. So they're mad as hell because they're graduating in debt and they're going to earn a million dollars less in their lifetime to pay it back. You know, they're mad about what's happening to them."