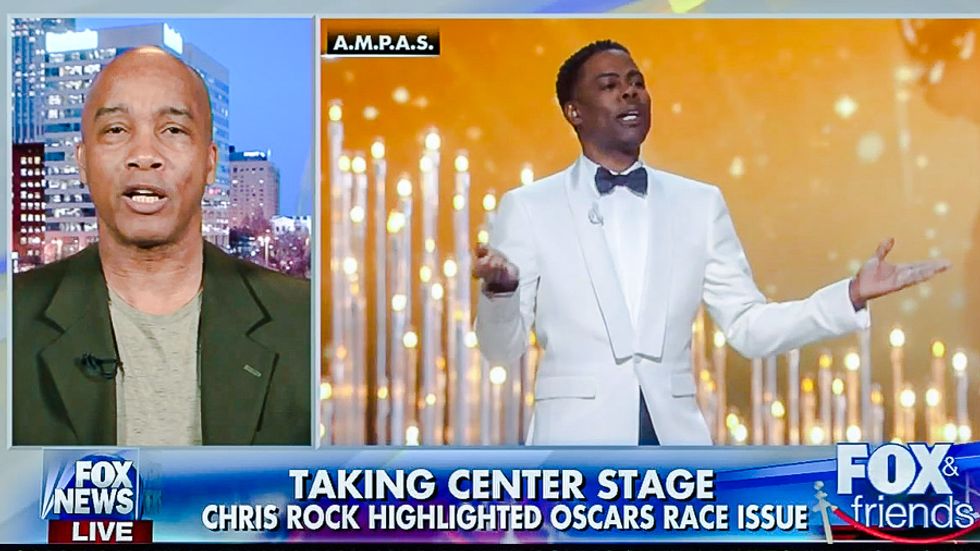 Fox News contributor Kevin Jackson lashed out at comedian Chris Rock on Monday over his comments on racism in Hollywood at Sunday's 88th Academy Awards.

During his monologue at the Oscars, Rock directly addressed the need for equal opportunities for black actors.

“I’m here at the Academy Awards, otherwise known as White People's Choice Awards," Rock joked. “If they nominated hosts, I wouldn’t even get this job. Y’all would be watching Neil Patrick Harris right now.”

“This year things are gonna be a little different at the Oscars," he added. "This year, the In Memoriam package is just gonna be Black people shot by the cops on their way to the movies.”

On Monday, Fox News host Brian Kilmeade introduced Jackson as the author of Race Pimping, and asked for his expert opinion on Rock's monologue.

"It was tragic," Jackson opined. "It was fun though watching a group of white racist liberals get put back on them the things that conservatives face every single day."

"At the end of the day, you can't say that Hollywood is racist because blacks have been getting awards in proportionate numbers for the last couple of decades," he continued. "So at the same time I'm watching these very sanctimonious liberals suffer, I also know that it's not good for the country that we go through this."

Jackson argued that Chris Rock was responsible for the "worst performance" at the Oscars in years.

"It was definitely one of the ones I wish I had a chance to miss," he insisted. "I think it was more just this idea how he was treating Hollywood of being so racist because black people hadn't been nominated."

Kilmeade concluded by taking a shot at Hollywood liberals: "They are the ones that are always condescending and condemning of the rest of us. And they are, perhaps, the worst offenders."