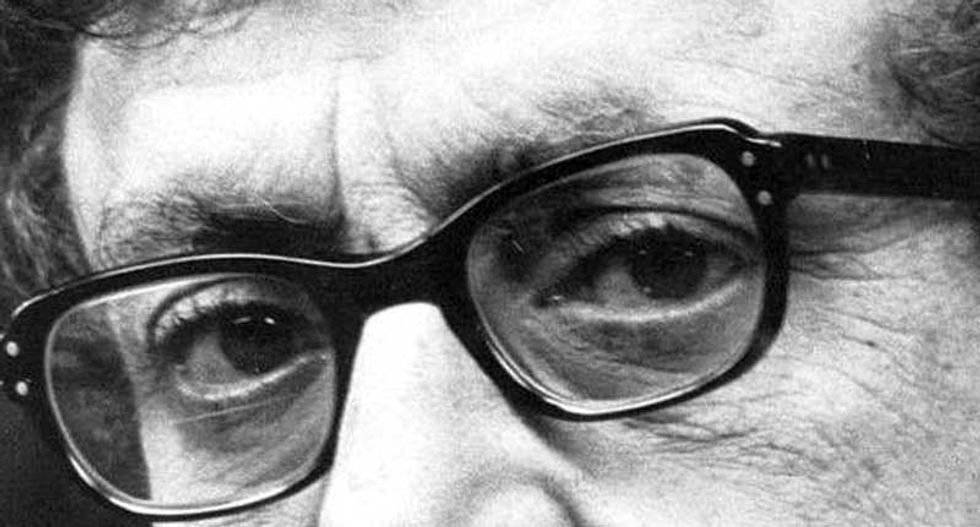 Nikola Tesla, if he is to be believed, rarely slept longer than two hours. The eccentric inventor was a polyphasic sleeper, fueling his immense output with naps and good old-fashioned willpower. On one occasion he worked in his laboratory for 84 straight hours; on others, he played billiards for twenty-four. Okay, maybe “eccentric” is a bit tame.

Few intellectuals are as extreme as Tesla, but brilliant minds tend to have batty sleep habits. Thinking is hard work — and while some can’t do it without proper rest, others can’t stand the thought of relaxation. From writers and philosophers to inventors and mathematicians, here are the sleep routines of seven of history’s greatest minds. 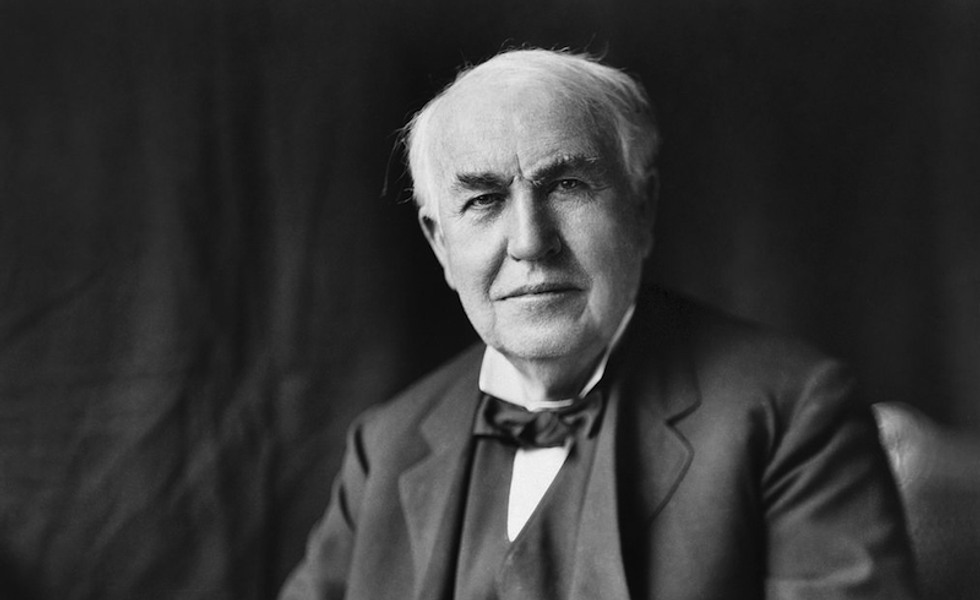 Thomas Edison loathed sleep. Like his rival Tesla, the inventor practiced polyphasic sleep and went so far as to deride anyone who kept a regular schedule. Consider this diatribe he penned in 1921:

People will not only do what they like to do — they overdo it 100 per cent. Most people overeat 100 per cent, and oversleep 100 per cent, because they like it. That extra 100 per cent makes them unhealthy and inefficient. The person who sleeps eight or ten hours a night is never fully asleep and never fully awake — they have only different degrees of doze through the twenty-four hours… For myself I never found need of more than four or five hours’ sleep in the twenty-four. I never dream. It’s real sleep. When by chance I have taken more I wake dull and indolent. We are always hearing people talk about ‘loss of sleep’ as a calamity. They better call it loss of time, vitality and opportunities. Just to satisfy my curiosity I have gone through files of the British Medical Journal and could not find a single case reported of anybody being hurt by loss of sleep. Insomnia is different entirely — but some people think they have insomnia if they can sleep only ten hours every night.

These are harsh (and medically inaccurate) words from a man devoted to the art of sleep. Edison was a professional power napper, placing cots around his laboratory and home where he was frequently photographed catching a few Zzzs.

Observe the siesta he took “after 72 hours of continuous work”: 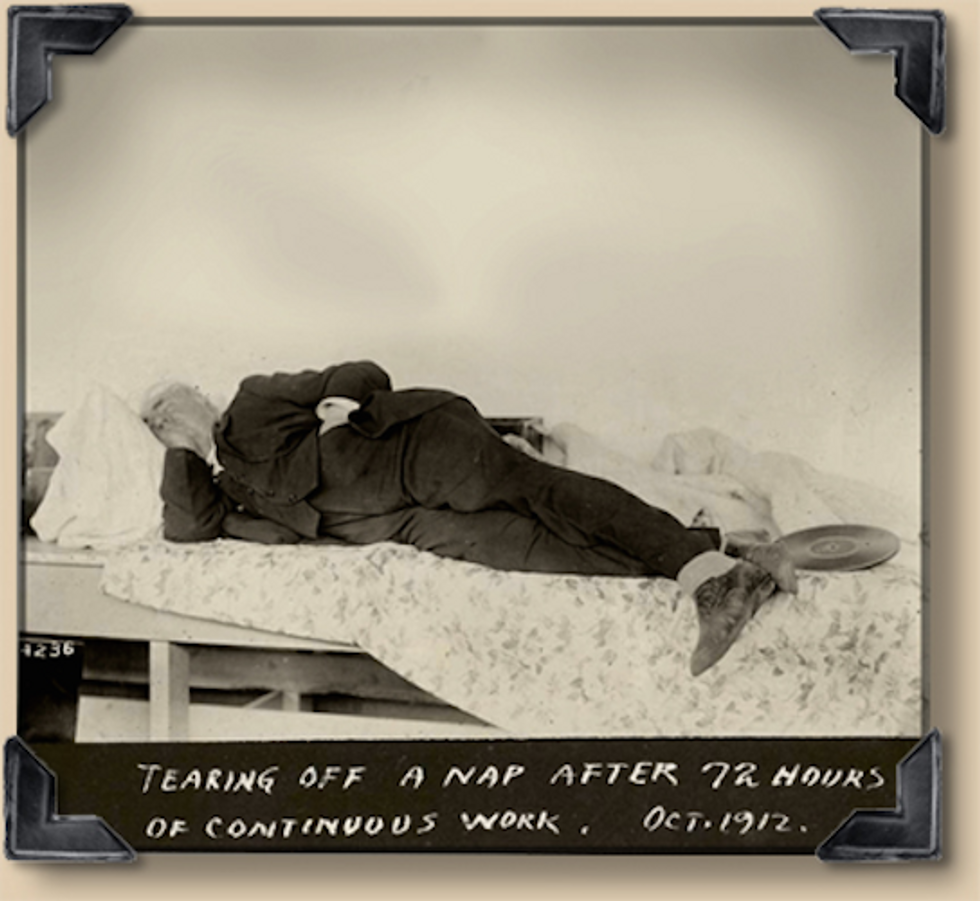 And here he is napping in the presence of President Warren G. Harding: 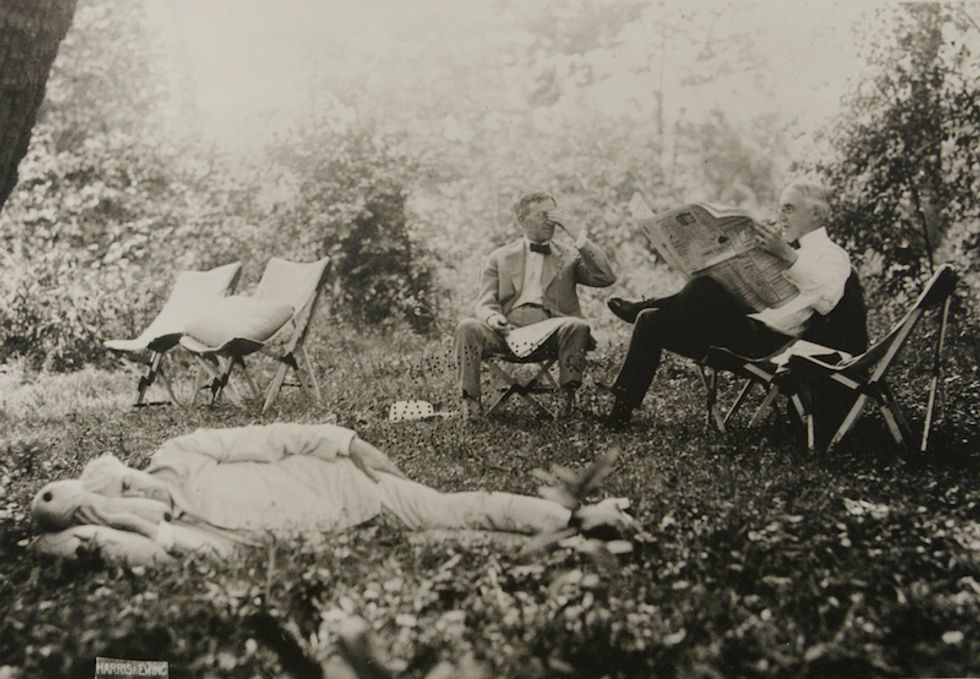 Clearly, the man had some level of appreciation for sleep, even if he was embarrassed to admit it.

An Edison nap was no dry affair. Whereas many of us awaken even blearier than when we fell asleep, he emerged lucid and ready for the next task. According to two biographers who observed the phenomenon: “Sleep is practically instantaneous and profound, and he awakes in immediate and full possession of his faculties, arising from the cot and going directly 'back to the job' without a moment’s hesitation.”

In his 1901 book How They Succeeded, Orison Swett Marden recalls asking Edison — then 53 — about his routine:

‘Do you have regular hours, Mr. Edison?’ I asked.

‘Oh,’ he said, ‘I do not work hard now. I come to the laboratory about eight o’clock every day and go home to tea at six, and then I study or work on some problem until eleven, which is my hour for bed.’

‘Fourteen or fifteen hours a day can scarcely be called loafing,’ I suggested.

‘Well,’ he replied, ‘for fifteen years I have worked on an average of twenty hours a day.’

When he was 47-years-old, Edison estimated his true age at 82, since working only eight hours a day would have taken until that time. 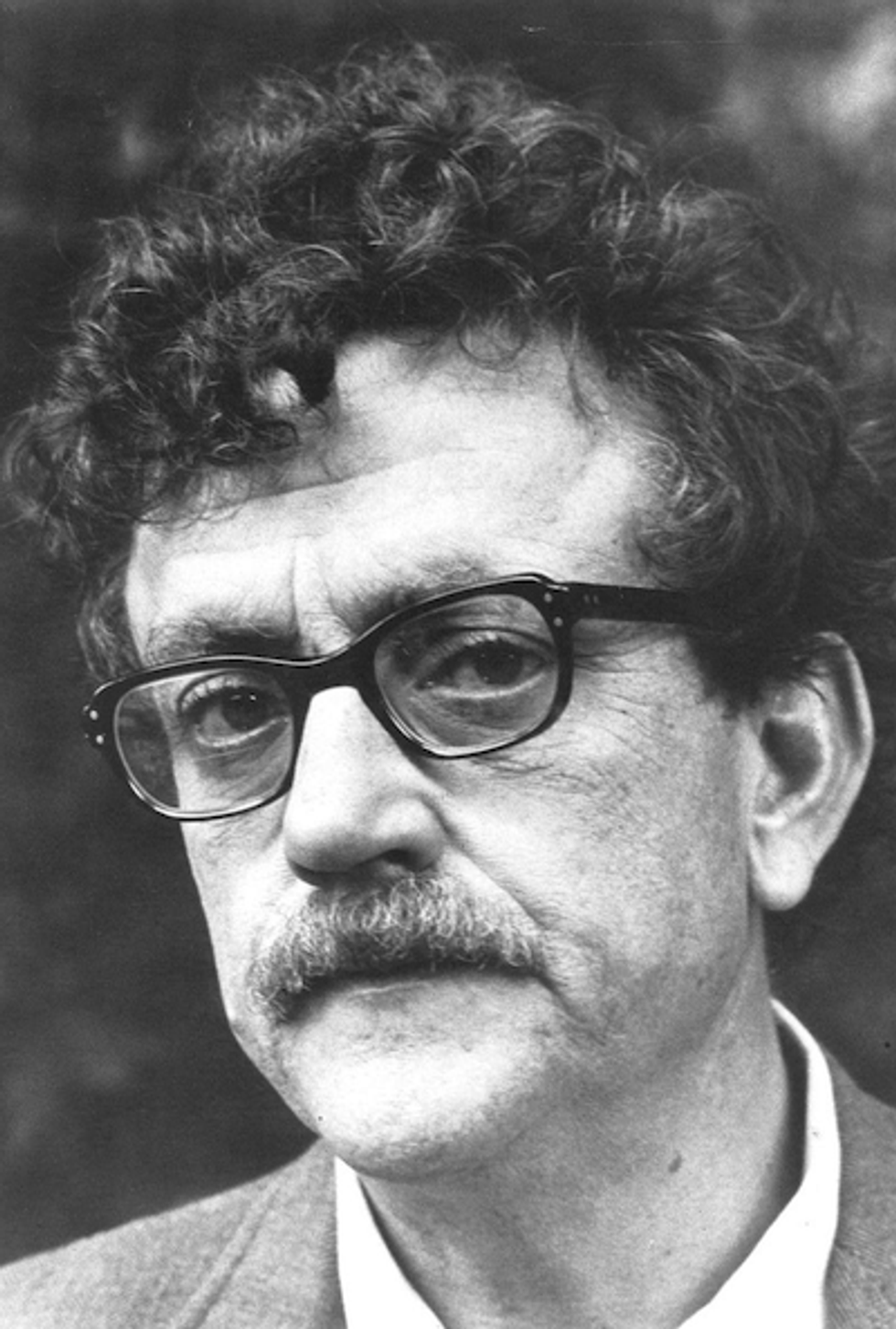 Though the Slaughterhouse Five kept regular hours, he seemed surprised by this, regarding his routine as though it were beyond his control. In a 1965 letter to his wife Jane, who stayed home in Cape Cod while her husband taught at the Iowa Writer’s Workshop, Vonnegut detailed this routine with the same spare, sneaks-up-on-you resonance that defined his fiction:

In an unmoored life like mine, sleep and hunger and work arrange themselves to suit themselves, without consulting me. I’m just as glad they haven’t consulted me about the tiresome details. What they have worked out is this: I awake at 5:30, work until 8:00, eat breakfast at home, work until 10:00, walk a few blocks into town, do errands, go to the nearby municipal swimming pool, which I have all to myself, and swim for half an hour, return home at 11:45, read the mail, eat lunch at noon. In the afternoon I do schoolwork, either teach or prepare. When I get home from school at about 5:30, I numb my twanging intellect with several belts of Scotch and water ($5.00/fifth at the State Liquor store, the only liquor store in town. There are loads of bars, though.), cook supper, read and listen to jazz (lots of good music on the radio here), slip off to sleep at ten. I do pushups and sit-ups all the time, and feel as though I am getting lean and sinewy, but maybe not. Last night, time and my body decided to take me to the movies. I saw The Umbrellas of Cherbourg, which I took very hard. To an unmoored, middle-aged man like myself, it was heart-breaking. That’s all right. I like to have my heart broken. 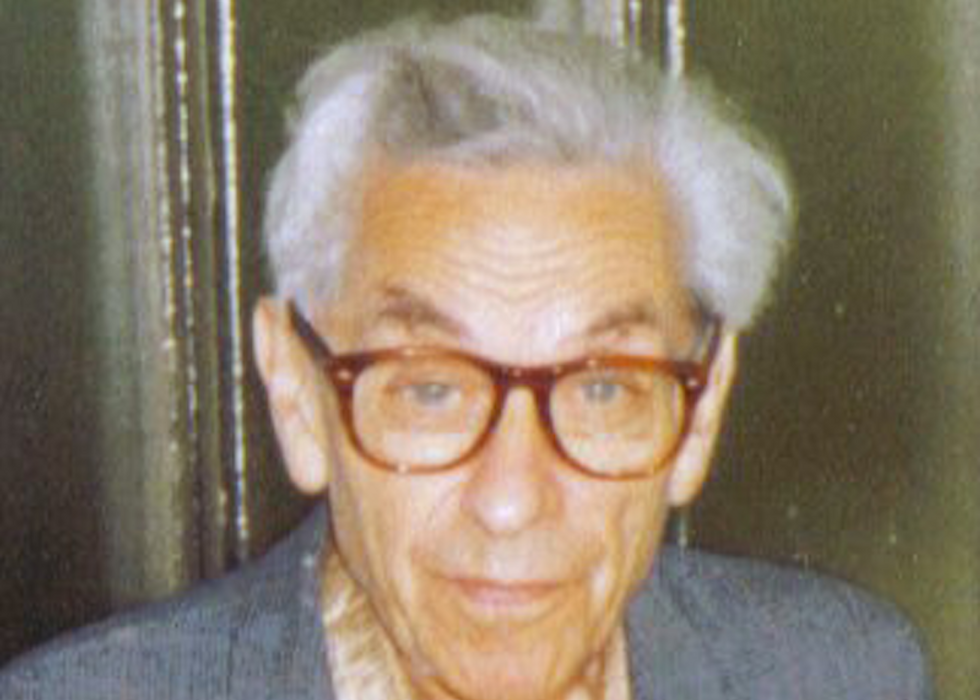 One of the most prolific mathematicians (and unusual persons) of the last century, Erdös is known for his contributions to number theory, probability theory, classical analysis and pretty much every mathematical field there is. He was a tireless worker, authoring or co-authoring an astounding 1,475 academic papers in his lifetime. His incredible output was due to his single-mindedness — he had few possessions other than his notebooks, remained celibate his entire life and famously didn’t care about anything but math — as well as his refusal to sleep. Here’s Erdös’ biographer Paul Hoffman:

Erdös first did mathematics at the age of three, but for the last twenty-five years of his life, since the death of his mother, he put in nineteen-hour days, keeping himself fortified with 10 to 20 milligrams of Benzedrine or Ritalin, strong espresso, and caffeine tablets. ‘A mathematician,’ Erdös was fond of saying, ‘is a machine for turning coffee into theorems.’ When friends urged him to slow down, he always had the same response: ‘There'll be plenty of time to rest in the grave.’

His drug habit was a source of concern for his friends, one of whom bet Erdös that he couldn’t give up amphetamines for thirty days. Erdös accepted the bet, won, and told his friend, “You’ve showed me I’m not an addict. But I didn’t get any work done. I’d get up in the morning and stare at a blank piece of paper. I’d have no ideas, just like an ordinary person. You’ve set mathematics back a month.” Naturally, he kept taking amphetamines after that. 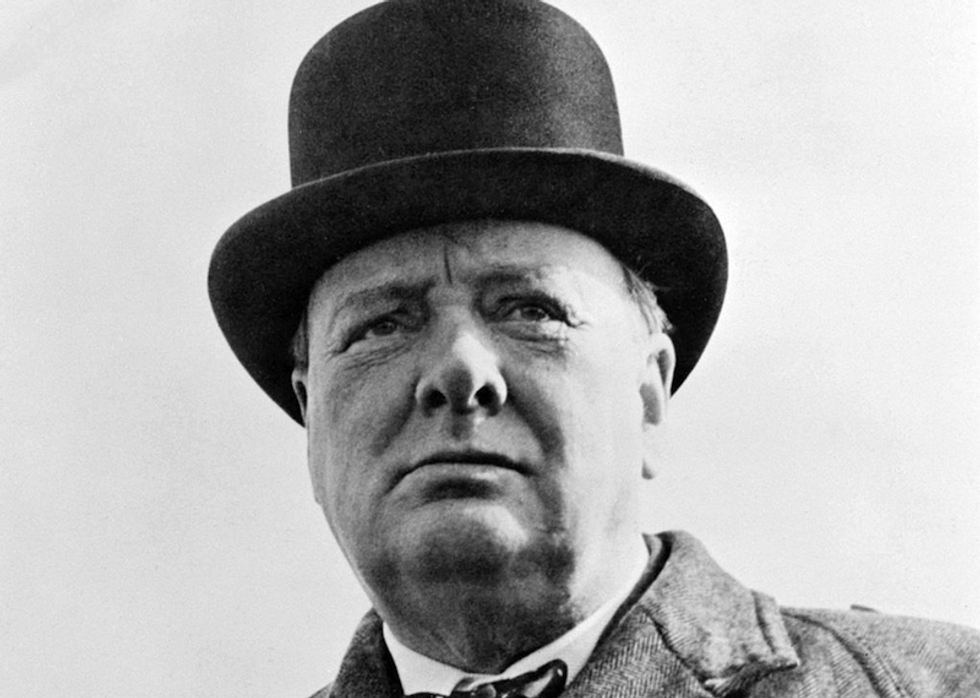 Winston Churchill famously slept naked. But his penchant for sleeping with his, um, cigar hanging out was one of many idiosyncratic rest habits.

For most of his public life, Churchill kept a biphasic schedule, sleeping twice in a 24-hour period: from around 3 a.m. to 8 a.m., and then for another two hours in the afternoon. For the two-time British Prime Minister, sleep was an opportunity to recharge, a way to maintain sanity in the face of overwhelming stress. As he once told a companion:

You must sleep some time between lunch and dinner, and no half-way measures. Take off your clothes and get into bed. That’s what I always do. Don’t think you will be doing less work because you sleep during the day. That’s a foolish notion held by people who have no imagination. You will be able to accomplish more. You get two days in one-well, at least one and a half, I'm sure. When the war started, I had to sleep during the day because that was the only way I could cope with my responsibilities. Later, when I became Prime Minister my burdens were, of course, even greater. Often I was obliged to work far into the night I had to see reports, take decisions and issue instructions that could not wait until the next day. And at night I'd also dictate minutes requesting information which my staff could assemble for me in the morning — and place before me when I woke up. 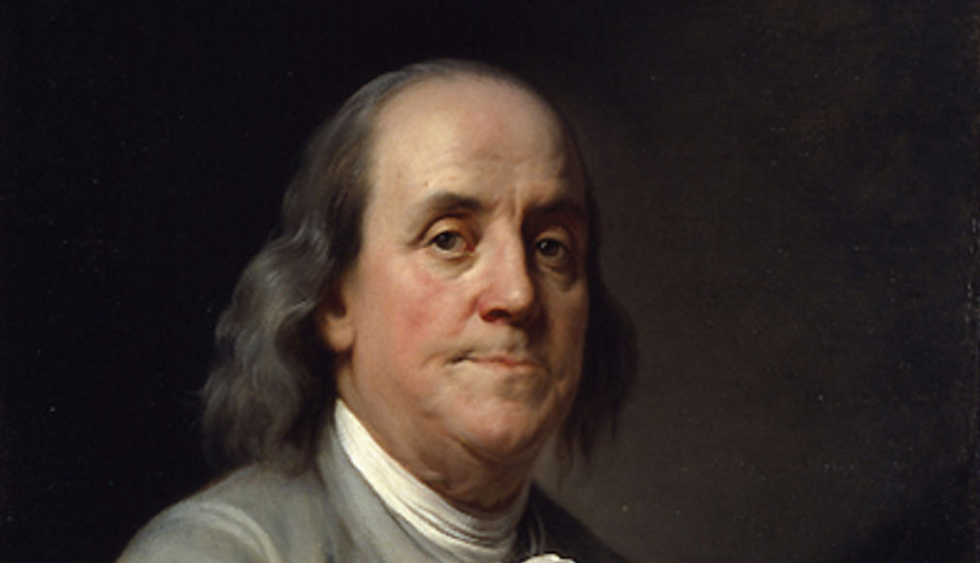 In his unfinished autobiography, Ben Franklin printed the simple daily schedule he (supposedly) attempted to follow throughout his life as a printer, inventor, Founding Father and ambassador. It’s rather dry (he went to bed at 10 p.m. and rose at 5 a.m.) but is an intriguing artifact nonetheless. In setting aside seven hours for sleep, Franklin acknowledges the importance of rest and routine to a productive life; he also acknowledged the utter impossibility of committing to routine.

“My scheme of order,” Franklin wrote, “gave me the most trouble; and I found that, tho’ it might be practicable where a man’s business was such as to leave him the disposition of his time, that of a journeyman printer, for instance, it was not possible to be exactly observed by a master, who must mix with the world, and often receive people of business at their own hours.” 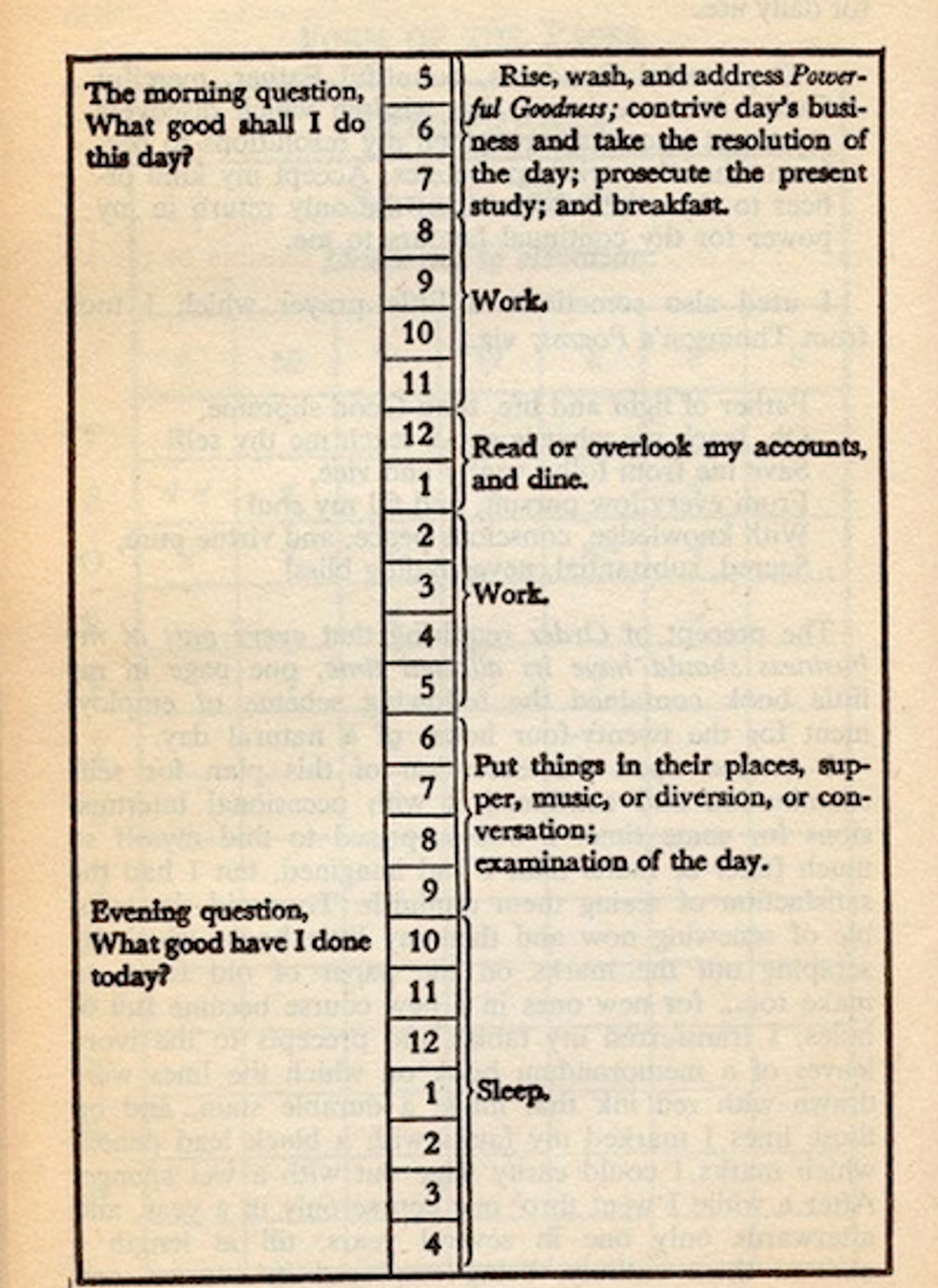 A look at Franklin's daily schedule 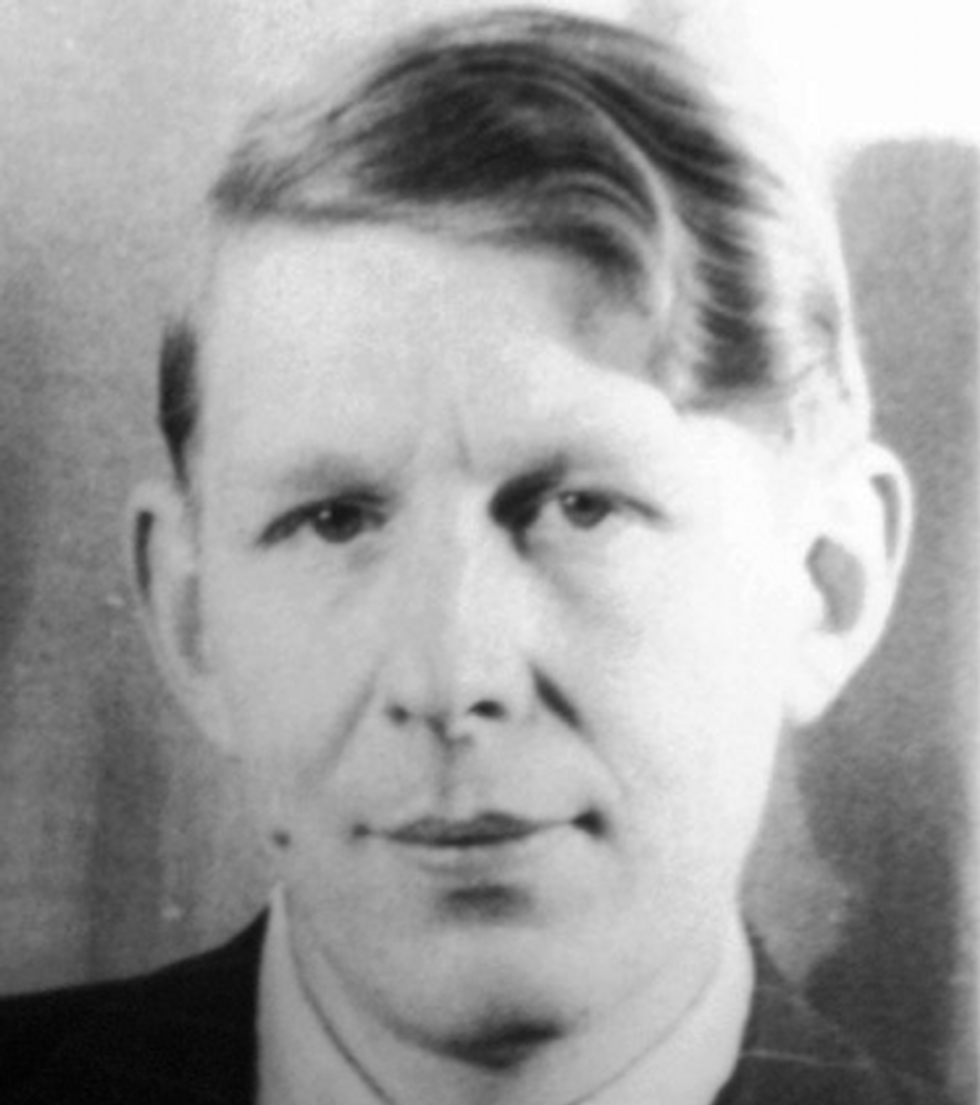 Wystan Hugh Auden was one of the most influential poets of the twentieth century, inspiring the likes of John Ashbery, James Merill, Philip Larkin, and Maxine Kumin. Hopefully they didn’t take after his sleep habits as well as his poetry: supposedly Auden took a dose of Benzedrine, a powerful amphetamine, every morning. He also took Seconal or other sedatives before going to sleep, and kept a glass of vodka beside his bed, a routine he began in 1938 and maintained for twenty years. Perhaps it was because he, better than most, knew that “time watches from the shadows/and coughs when you would kiss.” 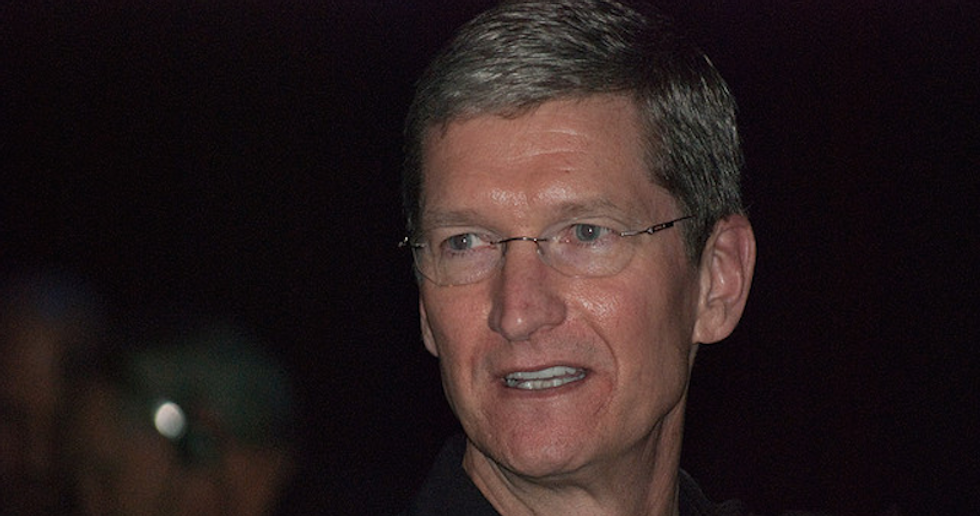 Here’s one of the most soul-draining tweets you’ll ever see:

#humblebrag aside, Cook seems to have assumed Steve Jobs’ work ethic as well as his title. According to various profiles, the Apple CEO slides out of bed at 3:45 every morning, spends an hour answering emails, hits the gym, then Starbucks, then arrives at the office by 6:30 a.m. He’s typically the last to leave, and goes to bed around 9:30 or 10 p.m. Ben Franklin would be jealous.

This story, by Seth Simons, orginally appeared at Van  Winkle's.