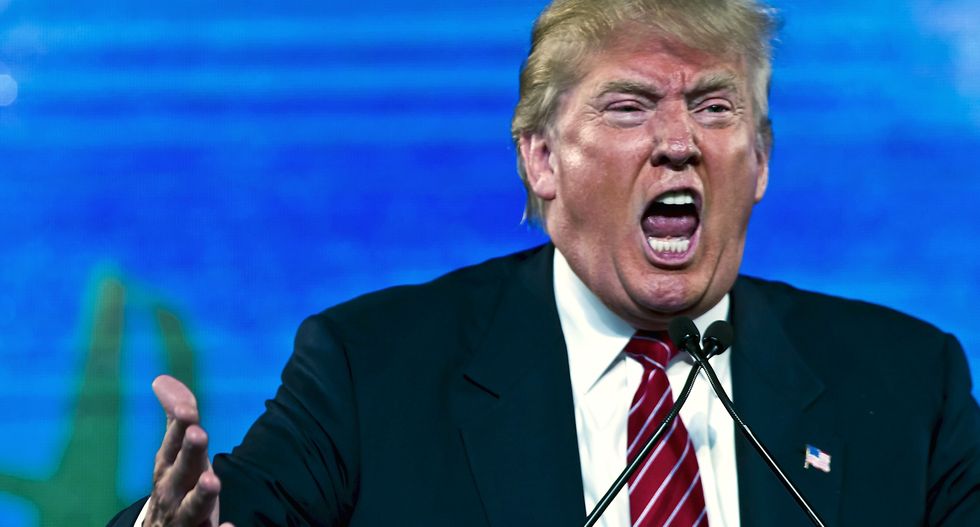 Everyone is talking about Donald Trump: supporters, critics and pundits. While many liberals laugh the celebrity’s presidential candidacy off as a joke, there are parts of Trump’s platform that are to the left of many establishment Democrats. For instance, Trump is a critic of NAFTA and seems to be the only GOP candidate who doesn’t want to take a hatchet to Social Security. These facts don’t necessarily contradict his controversial comments about Mexicans or his fearmongering over China, as white racial anxieties have long been a staple of populist campaigns, on the left and on the right.

While Trump’s economic stances might be more complex than many let on, there has been very little discussion about the labor issues which have surrounded a number of his real estate projects. Here are the three most glaring Trump labor scandals.

1. Many of the workers constructing a Trump International Hotel in DC are undocumented.

Trump’s recent comments about how Mexicans crossing the border are often drug dealers and rapists have angered a number of the laborers working on a Trump hotel. The Washington Post interviewed 15 people working on the $200 million hotel, and many admitted they had crossed the Mexican border. “It’s something ironic. The majority of us are Hispanics, many who came illegally. And we’re all here working very hard to build a better life for our families.”

“Do you think that when we’re hanging out there from the eighth floor that we’re raping or selling drugs?” Ramon Alvarez, a 48-year-old window worker from El Salvador told the Post. “We’re risking our lives and our health. A lot of the chemicals we deal with are toxic.”

The piece also quotes Ahmad Samadi, the 26-year-old site foreman who arrived in the US last year from Afghanistan. Most of the workers here are migrants,” said Samadi, “I don’t think it’s right, what he said. They’re hard workers.”

When CNN’s Anderson Cooper asked about his use of undocumented workers, Trump responded, “I can’t guarantee [I don’t use them]. How can anyone? You have anywhere from 11 to 34 million illegal immigrants. I used to hear 11, now I hear 34 million. I can’t guarantee anything. But I can say this: we work very hard to make sure that everybody is legal as opposed to illegal.”

2. Trump Tower was built by Polish immigrants who were paid $5/hour.

A group of immigrant workers nicknamed the Polish Brigade knocked down the Bonwit Teller building so that Trump Tower could be constructed. They claim that they were paid less than $5 an hour with no overtime and worked 12-hour shifts every day. Many were not paid for their work after the contractor went insolvent.

“'We worked in horrid, terrible conditions,'' a worker named Wojciech Kozak told the New York Times in 1998. ''We were frightened illegal immigrants and did not know enough about our rights.''

A lawsuit was filed against Trump in 1983, three years after Trump Tower was built, by Harry Diduck of the House Wreckers Union. The suit aimed to prove that Trump, his partner and the contractor had conspired to deprive local union workers out of pension and welfare contributions through the hiring of undocumented labor. During the trial workers testified that they had been threatened with deportation by Trump associates if they became a problem, and Trump admitted that he learned the workers were undocumented after the Bonwit Teller building was demolished. “I can make mistakes,” said Trump. “This was a mistake.”

The Polish Brigade’s lawyer said Trump was on the verge of hitting him with a $100 million lawsuit and he had received a mysterious call from someone referring to himself as “John Baron.” During the trial Trump admitted that he and one of his assistants sometimes used the John Baron pseudonym. “Lots of people use pen names,” he told a journalist. “Ernest Hemingway used one.”

Trump, his partner and the contractor were found guilty of partaking in a conspiracy. Trump appealed and a portion of the ruling was overturned. The Daily Beast’s Michael Daly wrote a comprehensive piece on the situation this July and summarized in his conclusion: “The tower that is his crown jewel and symbol of [Trump’s] wealth continues to stand on ground cleared by 200 undocumented workers who labored off the books, 12 hours a day, seven days a week, for no more than $5 an hour with no overtime.”

3. A worker fell to his death constructing Trump SoHo.

In 2008, while building a Trump hotel in lower Manhattan, a form that was used to pour concrete broke causing workers Yurly Vanchytsky and Francesco Palizzotto to fall 42 stories. Yanchytsky was killed and Palizzotto fell into a net, but suffered a brain injury and was unable to work again. When questioned about the incident, Trump claimed he had no connection to the project beyond the fact he licensed his name for it.

This year, the New York Daily News reported that Trump’s involvement was potentially much deeper. The firm that was used for construction, Difama Concrete, had a history of serious OSHA violations and had racked up thousands of dollars in fines for its work in the city. In 2004 a Difama worker had fallen to his death working on a project at 53rd Street. Trump’s hotel was being built by a developer called the Sapir Organization in partnership with Trump. Although Trump denied any direct involvement in the construction, an official at Bovis Lend Lease, the contractor hired to build the hotel, says Trump personally reviewed the contracts.

The New York Daily News obtained the information from the deposition of Jan Sokolowski, who was then Bovis’ general superintendent on the SoHo project. The deposition was taken from one of the lawsuits filed after the fatal accident. In reference to the meetings with Difama, Sokolowski said, “I was not part of those meetings, but I do know that Donald did review the contracts.”