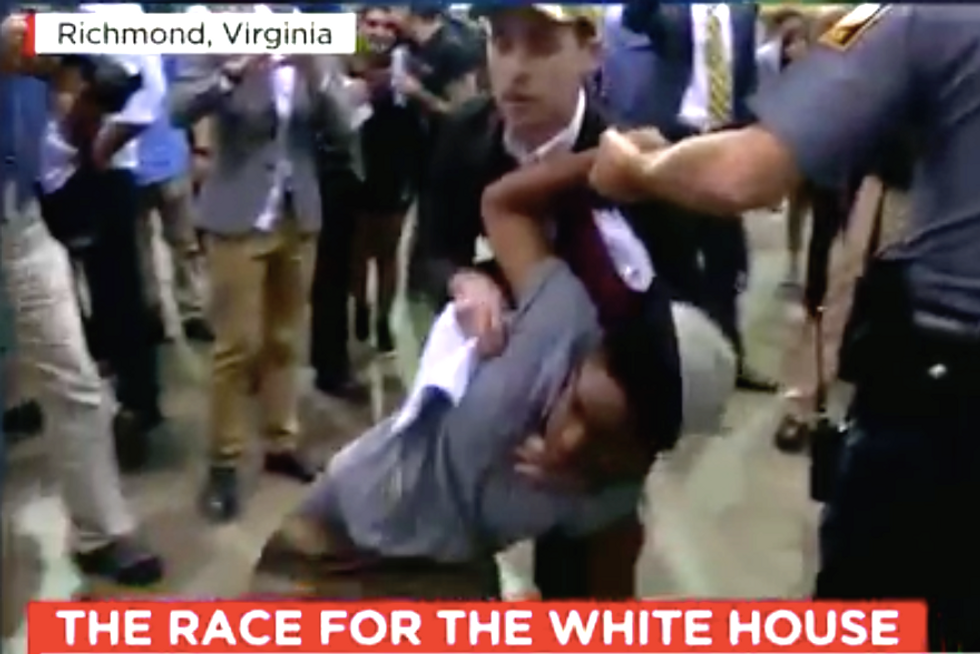 Pass the bourbon! Yes, it’s really come to that. Not only are stalwarts of the American conservative movement apoplectic about Donald Trump’s hostile takeover of the GOP, they are doing the country a remarkable favor by explicitly saying what makes their party so weak and Trump such a loser.

Take a look at what conservatives are saying about the GOP, its backbone, its base, and about its increasingly likely nominee.

1. All bark, no bite and no fight. The National Review’s staff writer Charles C.W. Cooke starts by saying the GOP doesn’t know how to fight anymore, whether shutting down the federal government for longer or taking on Trump: “If I am told one more time that it makes sense to nominate a single-payer-supporting defender of Planned Parenthood because Congress’s repeal-and-defund bill was vetoed by the incumbent, I shall begin to order bourbon in bulk.”

2. The others are losers and wimps. Cooke notes the rest of the 2016 GOP field has been, well, pathetic. “How will they [future conservatives] comprehend that at the end of February 2016 under 10 percent of all super PAC spending had been trained on Donald Trump? How will they see John Kasich’s admission that he doesn’t know if he should even be president, or process that Ben Carson put the construction of his own political shopping network above the country he supposedly loved? And what will they make of the fact that Ted Cruz and Marco Rubio wasted so much time pretending that they meaningfully disagreed with each other? Now is the time to throw everything at Trump, and to stop this disaster in its tracks.”

3. Trump is a white trash billionaire. Cooke says Rubio and Cruz need to say so. “They must explain that Trump is an entitled mess whose business record is so questionable that he managed to bankrupt a casino; that he is an unashamed fraud who didn’t even wait to be elected president before folding on Planned Parenthood and Obamacare, exactly like the “feckless” Congress he is running against; that he is feigning religiosity to appeal to people he believes are rubes; and, above all, that whatever he may be pretending now, he has spent a lifetime screwing the little guy.

4. Go birther on the birther. Cooke says the Donald must die to save the GOP, and those attacks can start with one of his ploys—saying he isn’t eligible to be president. “Melt down the fences if you have to; we need long-range bombers here. If Donald Trump can flood the airwaves with his nonsense, his opponents can counter it incessantly. And while they are at it, they can tie him up in court, just as he’s trying to do to Cruz. There are a good number of “just asking” questions ready to be put to them, among them “Trump’s mother was Scottish, can he really be president?” and “Trump ran a host of scams designed to rip off the poor; surely one of them would like to sue him?”

5. Get through to the “morons.” At The Federalist, Bill James, cites all the rational reasons why Trump is unqualified to be president, but then notes his party’s base is filled with “morons” supporting him. On the brainy side of this ledger, James said, “Trump is more interested in what is good for Donald Trump than in what is good for America… I don’t think Trump’s background in business prepares him… Trump’s hard-ass approach to problems would be very dangerous for our nation… (And) everything he says is either an outright lie, or something he is merely saying because it is convenient.”

James, who says Trump’s message comes down to standing up for yourself, blames the media—“you can’t get away from this egomaniac”—and says the GOP’s pro-Trump base has become a lost and ignorant tribe. “I don’t think that Trump can win, frankly, because I don’t think there are enough morons to elect him. A certain percentage of the American public is just morons; that’s the way it is.”

6. Arm the loosest of loose cannons? The right-wing Washington Post editorial boad is now freaking out that their pals at the Republican National Committee are failing “to do everything in their power to prevent a bullying demagogue from becoming their standard-bearer.” That’s rich, given their years-long embrace of Republican extremism. Nonetheless, their indictment of Trump is beyond scathing:

“This is a front-runner with no credible agenda and no suitable experience,” they editorialize. “He wants the United States to commit war crimes, including torture and the murder of innocent relatives of suspected terrorists. He admires Russian dictator Vladimir Putin and sees no difference between Mr. Putin’s victims and people killed in the defense of the United States. He would round up and deport 11 million people, a forced movement on a scale not attempted since Stalin or perhaps Pol Pot. He has, during the course of his campaign, denigrated women, Jews, Muslims, Mexicans, people with disabilities and many more. He routinely trades in wild falsehoods and doubles down when his lies are exposed.”

7. Call on principled leaders to end mob rule?  The WaPo editorial board concluded, “If Mr. Trump is to be stopped, now is the time for leaders of conscience to say they will not and cannot support him and to do what they can to stop him… Is the Republican Party truly not going to resist its own debasement?” Now, you didn’t hear it from us, but according to Leon Wolf, the new managing editor at RedState.com, that’s unlikely to happen because the GOP has become a party dominated by marauding know-nothings.

“Sadly, 35% of our party has decided to abdicate their responsibility as adults to take their civic voting duty seriously, and so the poisonous threat of Trump has completely altered my own personal voting calculus,” he wrote, saying he was now abandoning his long fealty to Cruz and voting for Rubio next week. “But even if you’re not as sanguine about the situation as I am, I hope you’ll realize the truth: right now the realistic options for our nominee are Marco Rubio and Donald Trump.”

These criticisms of the GOP—as a feckless party that can accomplish little more than posture and threaten—and a likely 2016 nominee whose qualifications are as dismal as the worst American presidents before the Civil War—are stunning. But if Trump runs away with hundreds of delegates on Super Tuesday, March 1, the country is going to have to face a candidate and an agenda unlike anything seen in generations.