Here are ten key quotes from the Republican debate 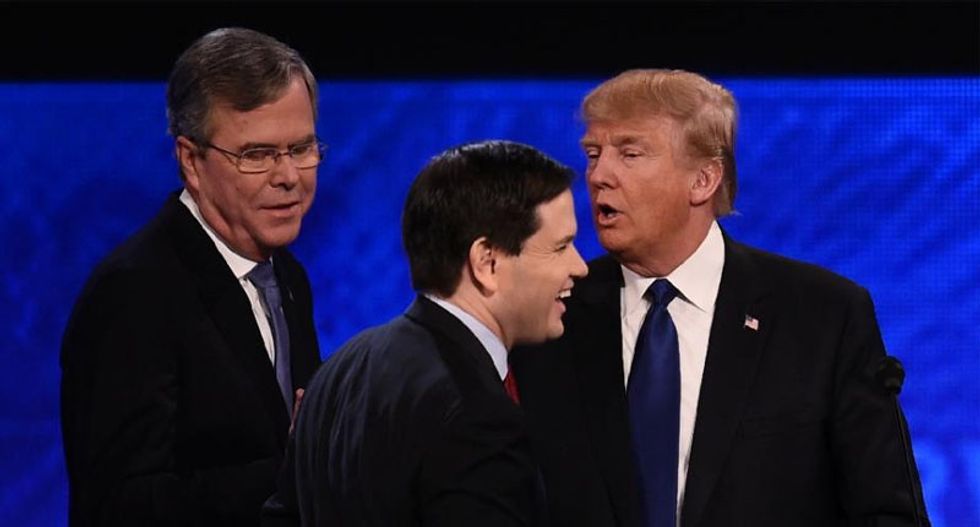 Republican candidates for the White House held their eighth debate ahead of the all-important New Hampshire primary election, which takes place Tuesday.

Here are 10 of the most memorable quotes from the event, which took place late Saturday.

"If I get elected president, head out tomorrow and buy a seat belt, because there's going to be so much happening in the first 100 days, it's going to make your head spin," Ohio Governor John Kasich told the audience.

How would Trump deal with suspected terrorists?

"You can rest assured that as commander in chief, I would use whatever enhanced interrogation methods we could to keep this country safe."

Ben Carson, after rumors circulated -- and were spread by during the Iowa Caucuses by the campaign team of rival Ted Cruz -- that he was pulling out of race.

On the same controversy, Carson added:

"I was very disappointed that members of his (Cruz's) team thought so little of me that they thought after having hundreds, if not thousands, of volunteers and college students who sacrificed their time and were dedicated to the cause... that I would just walk away 10 minutes before the caucus and say, 'Forget you guys.'"

"Jeb wants to be a tough guy tonight," taunted Trump, in one of the testier exchanges of the night.

"How tough it is to take property from an elderly woman?" Bush retorted, slamming the real estate mogul for his defense of the policy "eminent domain," allowing the government to take an individual's property when building highways or other public projects.

"Let me talk. Quiet," replied Trump to jeers from the crowd.

"I actually think I have the best temperament," said Trump at another point in the debate.

New Jersey Governor Chris Christie eviscerates Marco Rubio for a high number of absences in the Senate, including during key votes.

"Let's dispel with this fiction that Barack Obama doesn't know what he's doing. He knows exactly what he's doing," said Marco Rubio, in one of the worst moments of night for the Florida senator.

The remark fueled accusations that Rubio merely regurgitates memorized talking points during the debates, since he gave, in quick succession, various versions of the above statement, almost verbatim.

Trump, like most of his Republican rivals, has vowed to end President Barack Obama's signature healthcare reform plan, but said he would not leave Americans bereft of medical coverage.

"What I do say is there will be a certain number of people that will be on the street dying, and as a Republican, I don't want that to happen," he said.