Here are the five greatest balls of fire over Earth 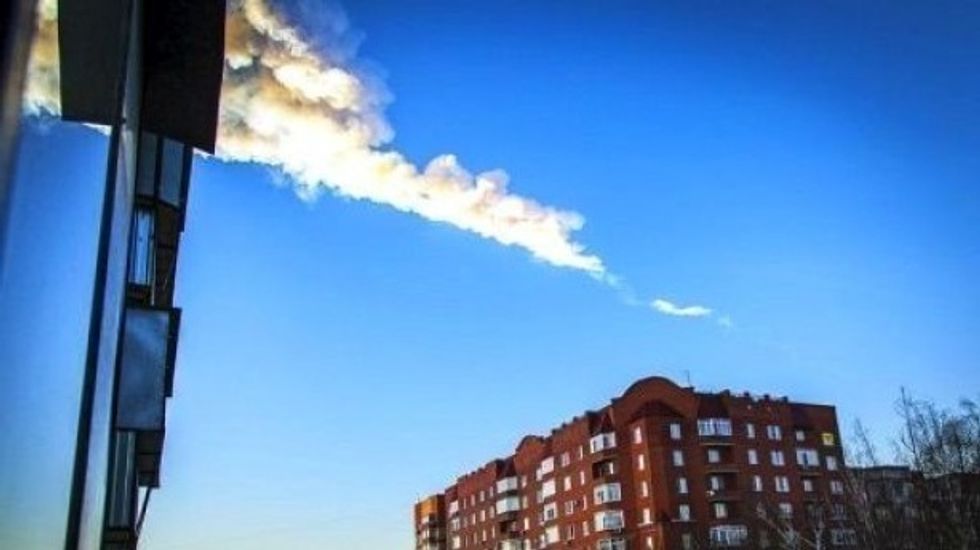 We live on a moving target in a cosmic firing range. Each day, the Earth is bombarded by about a hundred tonnes of space debris. It may sound alarming, but this is really nothing to worry about. Most of the objects that fall towards our planet are pretty small – typically about the size of a grain of sand or even smaller – and burn up in the upper atmosphere tens of kilometres above the ground.

But every now and again, something much bigger plummets Earthward and blazes a trail across the sky. Some make the headlines whereas others arrive almost unnoticed. Here are the most interesting movers and shakers.

On February 6, a chunk of interplanetary rubble, probably made of rock and measuring roughly five metres across, entered the Earth’s upper atmosphere. Hurtling across the sky at tens of kilometres a second, the air ahead of the meteor was compressed and heated, vaporising the object as it penetrated deep into the atmosphere. At some point, as the meteor streaked 20-30km above the South Atlantic ocean, it exploded with about the same force as 12,000 tonnes of TNT (about the same explosive force as the atomic bomb dropped on the Japanese city of Hiroshima).

Oddly enough, nobody saw this meteor explosion. We only know about it because of measurements made by various defence and scientific facilities that recorded the resulting atmospheric disturbances. The Earth is mainly ocean and uninhabited land and the odds are that most meteors burn up like this one, without any witnesses.

In contrast, some meteors grab worldwide attention. This fireball tore across the dawn skies over Chelyabinsk, Russia, on February 15 2013. Moving at around 20km a second, the fireball was many times brighter than the sun and was captured by car dashboard, CCTV and mobile phone cameras across the region.

Estimates indicate that object was about 20 metres across and exploded with the force of 500,000 tonnes of TNT, shattering thousands of windows, leaving a trail of damage 55 miles on either side of the rock’s trajectory and causing injuries to over 1,200 residents in the region. Although this object exploded in the atmosphere, the Chelyabinsk meteor hinted at the damage that an airburst can inflict on a populated area.

This four-metre diameter object, weighing in around 80 tonnes, entered Earth’s atmosphere over northern Sudan on the morning of October 7 2008. Moving at about 13km a second, the meteor exploded tens of kilometres above the ground with a force of about 1,000 tonnes of TNT, lighting up the dawn sky as a fireball that was observed over 1,000 kilometres away.

Although not particularly well-known, 2008 TC3 was a notable first – it was the first object to be observed and tracked prior to reaching Earth. This means it provided a much-needed test of the process of detecting and tracking near-Earth objects. Other incoming meteors have been detected since, but the process is not infallible. For example, the much bigger Chelyabinsk meteor remained undetected until its arrival in the skies over Russia.

Trees knocked over by the Tunguska blast.

This was a devastating event. On the morning of June 30 1908 an explosion over a sparsely-populated region of eastern Siberia flattened 80m trees over an area of two thousand square kilometres of forest. Subsequent analysis of the explosion suggests that it packed the same punch as around 15m tonnes of TNT – more than a thousand times the power of the Hiroshima bomb.

Estimates of the size and speed of the meteor depend on assumptions about the composition of the object: rocky and icy meteoroids have differ densities and behave differently during their descent. Nevertheless, the object responsible for the Tunguska blast is thought to have been between 50-200 metres in diameter, exploding 5-10km above the ground. The blast generated seismic and atmospheric disturbance across Asia and Europe but, amazingly, did not result in any known casualties.

This 1,200 metre wide, 170-metre deep scar in Arizona’s desert landscape is testament to what happens when a meteor survives its journey through the atmosphere and impacts onto the Earth’s surface. Modelling suggest that the crater was created by a nickel-iron meteorite about 50 metres in diameter impacting the surface at around 13km a second with a force of 10m tonnes of TNT.

Although not very different in size and velocity to the object associated with the Tunguska event, a steeper descent or differences in composition meant that the Barringer meteorite did not disintegrate or explode in the atmosphere. Fortunately, the impact occurred around 50,000 years ago, when the region was uninhabited by humans, but it is a stark reminder of the destructive power that can be unleashed when the heavens fall.

Science Video
Report typos and corrections to: corrections@rawstory.com.
Like this article ? Text `Support` to 50123 to donate.
READ COMMENTS - JOIN THE DISCUSSION