If football is so deadly, why do we keep watching? 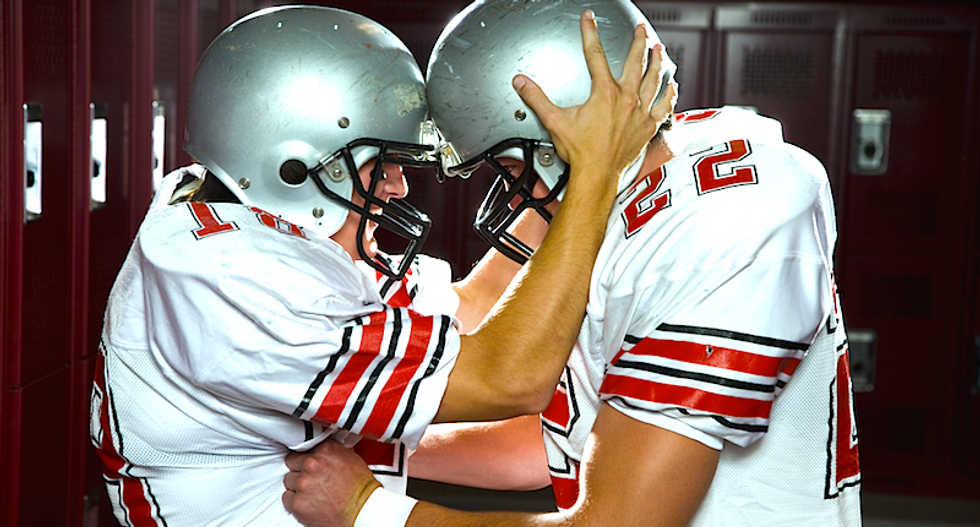 Right in the middle of football’s biggest party week, there was more tragic news on the head injury front. Ken Stabler, the flamboyant Oakland Raiders quarterback who led his team to a Super Bowl victory in January 1977, was found to have had brain disease – chronic traumatic encephalopathy, or CTE – when he died of colon cancer last July.

It was saddening to learn of the latest National Football League great to have suffered from the illness, but not shocking. Hall of Famers Frank Gifford and Junior Seau are just two of a growing list of former players who developed the disease, as confirmed the only way now possible – through an autopsy.

The problem, sometimes called the league’s concussion crisis, has gotten widespread attention over the last decade, including the Hollywood treatment in December, when the Will Smith film “Concussion” was released, chronicling the work of the man who identified CTE, Dr. Bennet Omalu.

Smith was featured on the cover of Sports Illustrated calling the project “incendiary.”

The purpose of this piece, at a time when the Super Bowl forces even football haters to at least acknowledge the sport, is to answer that question. The answer is no. The next step is to offer a couple of reasons why that is so and to speculate on what it would take for football to radically change.

Frank Gifford (left), who died in 2015, suffered from CTE following a 12-year career as a running back in the NFL. His family had his brain studied to help understand the links between football and traumatic brain injury.

There are two reasons why pro football in particular and organized football in general won’t go out of existence, despite a consistent flow of head injury stories.

The first is popularity, and the financial strength that popularity means. The occasion of Super Bowl 50 between the Denver Broncos and Charlotte Panthers illustrates the point perfectly.

Want to guess what the most-watched event in U.S. television history was? Last year’s Super Bowl, with 114.4 million viewers. What to guess the second? The Super Bowl in 2014. And so on, until the final episode of “M*A*S*H” at number seven. Not only does the NFL dominate this one Sunday, it crushes the competition for sports viewing throughout the fall. According to Sports Media Watch, NFL games were 43 of the top 50 most-watched sporting events in the U.S. in 2015. Three others were college football.

The NFL’s influence doesn’t stop with TV. Las Vegas’ legal betting handle last year was nearly US$116 million and record merchandising sales are expected this time around, given the 50th anniversary of the game and the sleek gold logo that goes with the event.

Super Bowl ads are now $5 million for a 30-second spot. And don’t forget that the league itself pulled in about $12 billion in revenue last year.

By contrast, “Concussion,” per Box Office Mojo, has grossed $34 million in the United States, 73rd out of films released domestically in the last year. Perhaps my own strongest memory of the movie is walking out of the half-full theater afterward to see all eyes in the bars and restaurants down the street watching the Patriots beat the Chiefs in a playoff game.

In ‘Concussion,’ Will Smith portrays Dr. Bennet Omalu, the pathologist who a decade ago first linked brain damage to the deaths of NFL players.

This leads to the second point.

The implication of that Newsweek headline, it seems, is an argument that goes like this: “If fans only understood the dangers of concussions, they would turn against football, as they did against smoking or drunk driving.”

But the issue is not one of awareness. The New York Times, among others, reported powerfully on the issue as early as 2007, and a “Frontline” documentary on the subject in 2013 was a national discussion point. While there is definite concern about concussions, as polling data shows, fans just haven’t been ready to pull the plug. They still watch the sport, which to be fair has seen 39 rule changes in the last five years to promote health and safety, according to MMQB.

The Associated Press, meanwhile, conducted interviews this season with 100 NFL players themselves and found only 39 were more worried about the long-term effects of concussions than other injuries.

For fans and players, maybe it’s this simple: intuitively, we’ve always known football was risky, and now we know more about what that looks like. But if everyone knows the risks involved, then everyone should be free to do and watch what they like. There are other examples of sports and activities in a similar vein – backcountry skiing, motor racing, hockey and boxing, to name a few.

The role of concussions in high school football is convincing some parents to keep their kids off the field … though they still enjoy watching the Super Bowl.

Why do we still watch?

Or, it may be that we’re just in a stalemate, more or less, until something comes along that definitively changes football, such as a new medical finding that the sport is even more dangerous than currently agreed upon or a reform that makes it substantially safer, such as a helmet redesign or new tackling techniques.

Notably, “another helmet” – that is, one helmet bumping into another – has been named as the source of concussions in more than half of the regular season NFL cases over the last four years.

Whatever the reason we still watch, this is much seems sure. The Super Bowl will kick off on Sunday evening and fully a third of Americans will be tuned in.

And you know what? The same thing will probably be true next year.