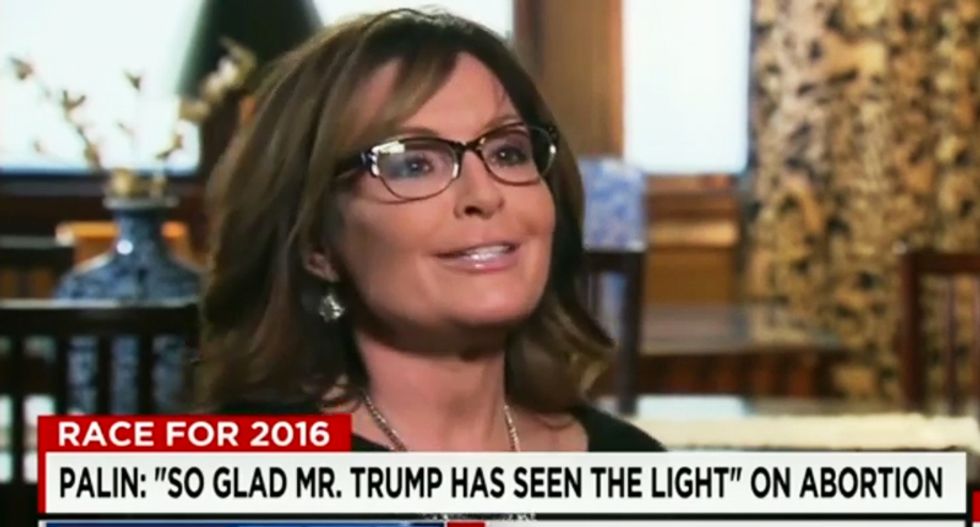 In a less contentious interview than the one Palin had on NBC's Today show, Palin praised Trump for coming around to her anti-choice views. The billionaire, who had once been pro-choice, recently had a change of heart prior to yesterday's presidential caucus in evangelical-heavy Iowa.

"I am so glad that Mr. Trump has seen the light and understands the sanctity of innocent life and how a baby in the womb should be most protected, "the effusive Palin said, before she began free associating.

"What has been kind of sad about this situation though, politically speaking, are there are groups that are pro-life and they say they want to bring more people into the fold," she continued. "They're giving Trump a hard time for his past views on abortion where they're celebrating others, like, uh, I was going through a list. Like Justin Bieber and, gosh, uh —"

"Yeah, yeah, who has made statements, understanding the sanctity of life, but in the past said it was no big deal to him," Palin said. "He's just one example."

The then 16-year-old Canadian pop star -- hardly known for political commentary --  told Rolling Stone in 2011, "I really don't believe in abortion. It's like killing a baby," adding that, even in cases of a rape that produces a pregnancy, "everything happens for a reason,"

Bieber's comments were attacked on The View, with co-host Joy Behar saying Bieber's "everything happens for a reason" comment was "really insulting to people who have been raped or victims of incest. There is no 'reason' for that."

"I don't think we can discount somebody's opinion because they happen to be 16," Hasselbeck said. "We have brilliant minds who are young [and] young minds who have created things that are now changing the world. To discount his opinion simply because he's 16, I think, is a disservice."

Watch Palin's interview with Jake Tapper below, via YouTube: