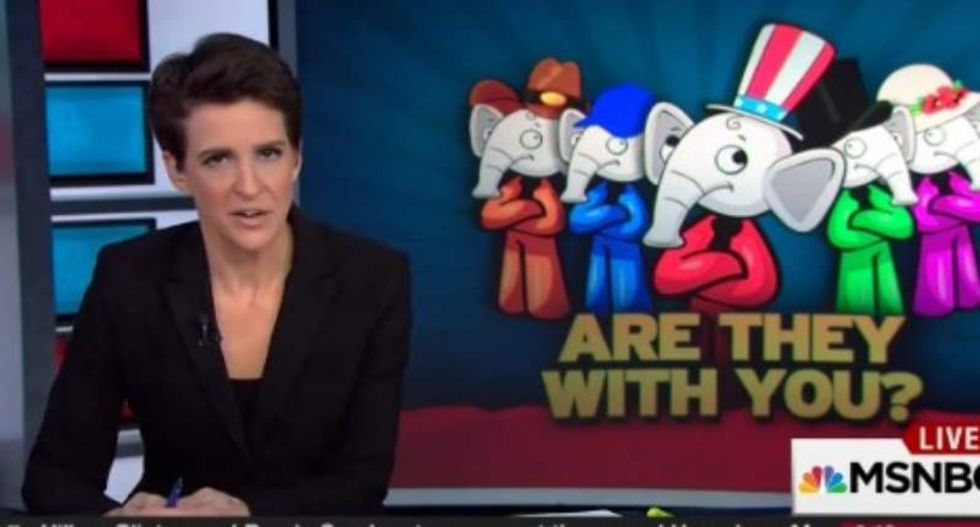 While no candidate is responsible for the people who like them, Rachel Maddow argued on Friday, Sen. Ted Cruz's (R-TX) latest endorsement from an extremely conservative figure should be setting off some red flags.

"Honestly, this year, Ted Cruz is shooting the moon on this stuff," she said. "I don't know how long it's gonna be before the Beltway and notices this pattern, and realizes it might be a real issue for him."

As Media Matters reported, Cruz boasted on his website that he had won the support of Ted Nugent, less than a week after Nugent made several anti-Semitic posts, including one accusing Jews supporting gun safety laws of being "Nazis in disguise."

Maddow compared Nugent's support of the Tea Party senator to similar endorsements by anti-Semitic pastor Mike Bickle and Kevin Swanson, a pastor who has called for the death of the US LGBT population.

"If you're Senator Cruz and you put this up on your website proudly embracing an endorsement from Ted Nugent -- showing off, campaigning even tonight on the fact that you are the choice for president of Ted Nugent -- then you do kind of own this," she argued. "Just like you own the guy who said that God sent Hitler to kill all the Jews, because you campaigned on his endorsement, too. Just like you own it when the guy saying every gay person in America should be executed, because you attended his event. You shared a stage with him. You did not have to do that."

Watch Maddow's commentary, as posted online on Friday, below.