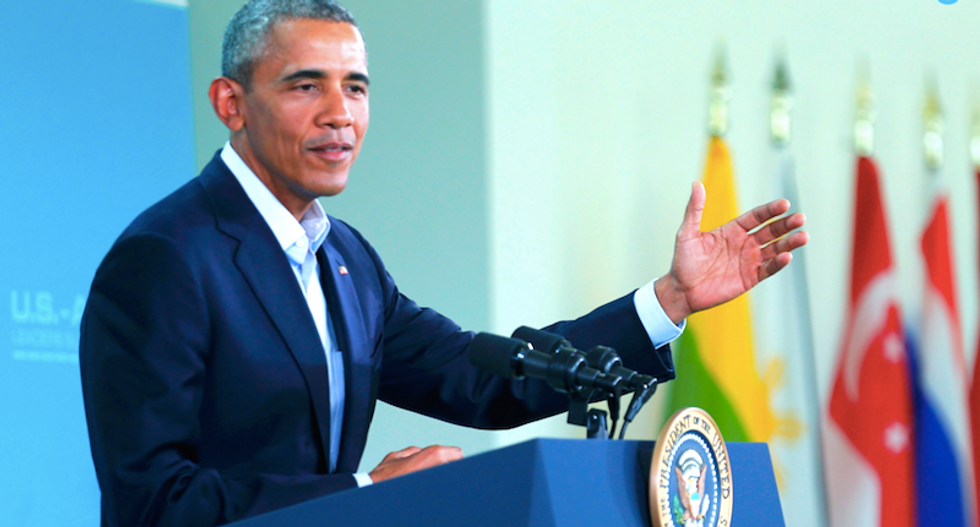 President Barack Obama speaks during a news conference at the close of the Association of Southeast Asian Nations (ASEAN) summit at Sunnylands in Rancho Mirage, California February 16, 2016. (REUTERS/Mike Blake)

President Barack Obama on Tuesday vowed to pick an indisputably qualified nominee for the Supreme Court and chided Republicans who control the U.S. Senate for threatening to block him from filling the pivotal vacancy.

Obama told senators he has a constitutional duty to nominate a new justice after Saturday's death of conservative Justice Antonin Scalia and reminded them of their constitutional obligation to "do their job" and vote to approve or reject his nominee.

Senate Majority Leader Mitch McConnell has said the seat on the nation's highest court should remain vacant until Obama's successor takes office in January so voters can have a say on the selection when they cast ballots in the Nov. 8 presidential election.

"I'm amused when I hear people who claim to be strict interpreters of the Constitution suddenly reading into it a whole series of provisions that are not there," Obama said.

"The Constitution is pretty clear about what is supposed to happen now," Obama, a former constitutional law professor, told a news conference at the close of a two-day meeting with leaders from Southeast Asia.

In Washington, Scalia's chair in the court's ornate chamber was draped with black wool crepe in accordance with court tradition following a justice's death.

The court said Scalia's body will lie in repose at the Supreme Court building on Friday before his funeral Mass at the Basilica of the National Shrine of the Immaculate Conception in Washington on Saturday.

Obama's nominee could shift the balance of power on the court, which had five conservatives and four liberals before Scalia's death.

The president said he understood the high stakes for Republican senators under pressure to vote against his pick for the lifetime appointment, who conceivably would be the deciding vote in cases where the court is split.

Obama said the "venom and rancor in Washington" has led to the Senate routinely blocking his nominations for lower courts and other posts but said the Supreme Court is too important to get trapped in political gridlock.

"It's the one court where we would expect elected officials to rise above day-to-day politics," he said.

But Republicans have pointed out that Obama and members of his cabinet, who were then in the Senate, were not above trying to block the Supreme Court nomination of Justice Samuel Alito by then-President George W. Bush in 2006.

"While he complained about filibusters today, he joined filibusters while in the Senate," said Don Stewart, a spokesman for Senate Republican Majority Leader Mitch McConnell.

Asked about his record, Obama acknowledged Democrats have played politics with nominations, too, through what he described as "strategic decisions" that ultimately did not block the president's nominee.

"But what is also true is Justice Alito is on the bench right now," Obama said.

Obama shed little light on whom he would choose or how the White House will try to finesse his choice through Congress.

"We're going to find somebody who is an outstanding legal mind, somebody who cares deeply about our democracy and cares about rule of law," Obama said.

"I'm going to present somebody who indisputably is qualified for the seat, and any fair-minded person, even somebody who disagrees with my politics, would say would serve with honor and integrity on the court," he added.

Asked directly if that meant he would choose a moderate candidate, Obama said, "No."

He said there was "more than enough time" for the Senate to hold hearings and vote on his nominee without the White House needing to resort to a procedure known as a recess appointment to get around the Senate when it is not in session.

"Part of the problem we have here is that we’ve almost become accustomed to how obstructionist the Senate has become to pending nominations," he said. "This argument is just an extension of what we’ve seen in the Senate generally, and not just judicial nominees."

But he did not explicitly rule out a recess appointment.

Republican Judiciary Committee Chairman Chuck Grassley, whose panel weighs Supreme Court nominations, said on Tuesday he will wait until Obama names his pick to fill the vacancy before deciding whether to hold confirmation hearings.

Grassley has offered mixed messages since Scalia's death on how the Senate should proceed on the vacancy, alternating hardline views on blocking any nominee with comments not ruling out hearings.

"I would wait until the nominee is made before I would make any decisions" about confirmation hearings, Grassley said, according to Radio Iowa. "In other words, take it a step at a time."