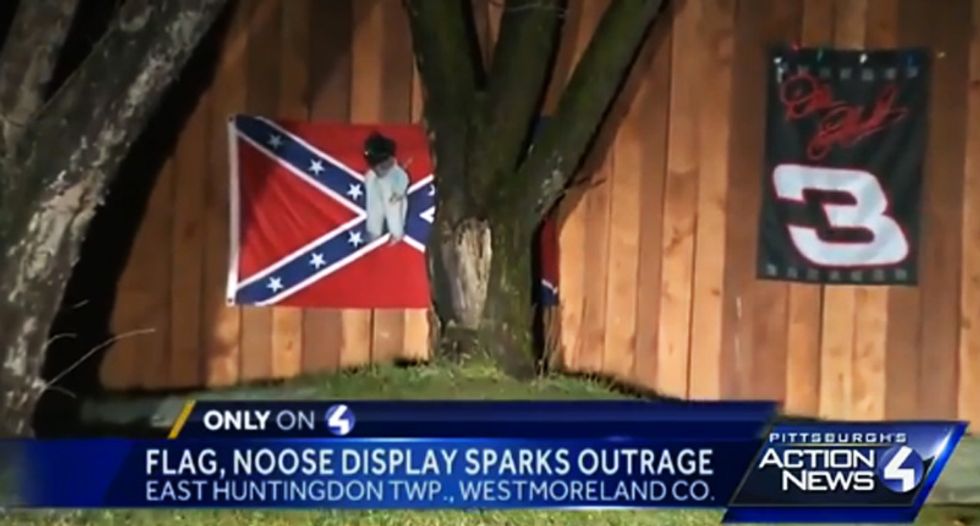 A visitor traveling through East Huntingdon Township in Pennsylvania was stunned to see a Confederate flag with an African-American baby doll hanging from a noose with a knife stuck in its back displayed on a neighborhood fence, WTAE is reporting.

According to locals, the display had been up for months.

The flag and doll, accompanied by a Dale Earnhardt #3 banner, was seen and photographed by a woman who contacted the local media.

"We actually turned around because we had passed the house, and there it was, and the first thing was shock," said Rachel Szolek, who  posted the picture on Facebook.

After reporters knocked on the door of the home seeking comment -- with no one answering -- the display disappeared.

"That's all I want, you know. I don't care, I don't want him punished," Szolek said.

East Huntingdon Township's supervisor Paul Hodgkiss said the display went against the values of the community, stating, "I'm definitely against anything like that in our township."

Hodgkiss cautioned that the display is likely legal, but that he was meeting with local officials to see what they could do about it.

"It probably is allowed to be there at his property, but if we can do anything to stop it we will," Hodgkiss stated.

Watch the video below from WTAE: