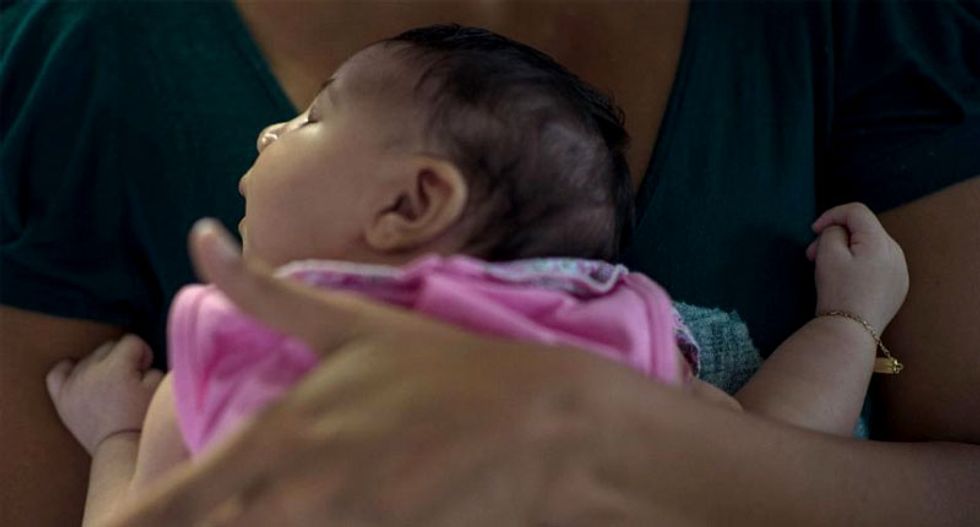 A mother holds her 45-day-old daughter, who is suffering from microcephalia caught through an Aedes aegypti mosquito bite, at a hospital in Salvador, Brazil on January 27, 2016 (AFP Photo/Christophe Simon)

Pope Francis insisted Thursday that abortion was always a crime but hinted that the Church could exceptionally relax its ban on contraception for women at risk of contracting the Zika virus.

"Abortion is not a lesser evil. It is a crime," Francis said in response to a question about how best to combat the outbreak across Latin America of the virus linked to birth defects.

But he added: "Avoiding a pregnancy is not an absolute evil."

The 79-year-old pontiff recalled that one of his predecessors, Paul VI (1963-1978) had authorised nuns working in Africa to use contraceptives in light of a high risk of them being raped by soldiers.

"We must not confuse the evil consisted of avoiding a pregnancy with abortion," Francis said. "Abortion is not a theological problem. It is a human problem, medical. One person is killed to save another. It is evil in itself, it is not a religious evil, it is a human evil.

"On the contrary, avoiding a pregnancy and, in the cases of Paul VI which I have cited, it was clear.

"I would also urge doctors to do everything they can to develop a vaccine."

The United Nations and aid organisations have urged countries hit by the virus to ensure women have access to contraception to reduce the risk of infection and the right to abortion should they decide to terminate a pregnancy.

Many Latin American countries outlaw abortion or allow it only if the mother's life is in danger.

After initially saying little about the outbreak, Catholic leaders in the region have recently begun to assert the Church's opposition to what it terms "artificial" birth control and abortion.

Instead of using condoms or the contraceptive pill, Church officials have been recommending abstinence or what they term natural family planning -- scheduling sexual relations for the least fertile periods of a woman's menstrual cycle.