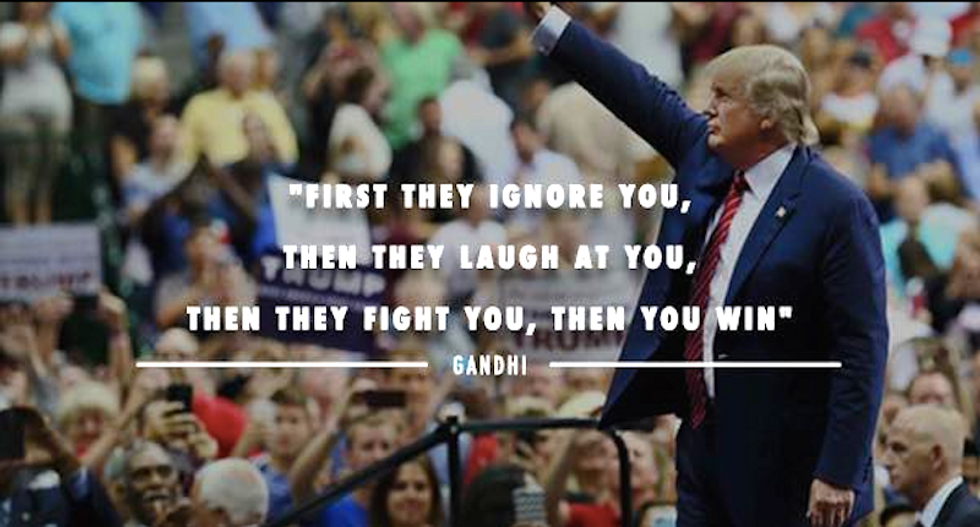 Sarah Palin used an apocryphal quote to compare Donald Trump, and perhaps herself, to Mohandas Gandhi.

The former half-term governor of Alaska and failed Republican vice presidential candidate posted an image of Trump on her Facebook account, overlaid with a quote attributed to the Indian independence leader hailed as the architect of non-violent civil disobedience.

A number of Palin's social media followers pointed out the ludicrous notion of comparing the famously ascetic Gandhi to Trump -- a billionaire who boasts ostentatiously about his wealth and threatens violence against protesters and even random strangers.

Even some of Palin's staunchest supporters found the comparison absurd.

"No. You can NOT compare Gahndi and Trump," said fan Teresa Lynn. "Stop supporting this man. He is NOT worthy of your support, admiration, or your time. Please support an actual conservative Republican that has a moral code."

Setting the ridiculous comparison aside, it's unlikely that Gandhi even said the words Palin -- and many others -- have attributed to him.

Although the quote neatly sums up Gandhi's philosophy of satyagraha -- holding onto moral truth even in the face of violent opposition -- there's no evidence he spoke those particular words.

The quote more likely is based on a 1918 address made by trade unionist Nicholas Klein to the Amalgamated Clothing Workers of America in Baltimore.

"First they ignore you. Then they ridicule you. And then they attack you and want to burn you," Klein said in that speech. "And then they build monuments to you. And that, is what is going to happen to the Amalgamated Clothing Workers of America."