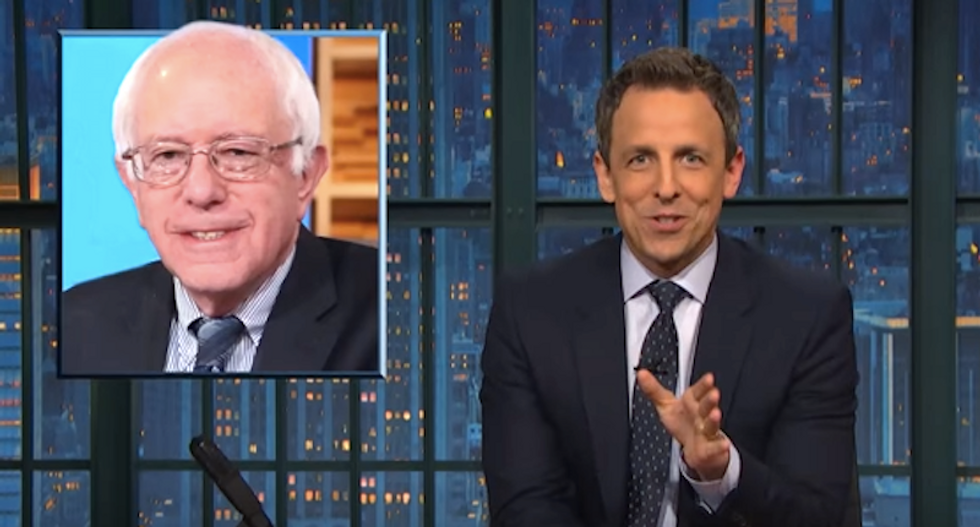 Bernie Sanders has so far avoided major fire from the Republican Party, which has preferred to sit back and let him attack Democratic frontrunner Hillary Clinton -- but that doesn't mean Fox News hasn't been foaming at the mouth about his democratic socialist agenda.

Seth Meyers took a tour Thursday night through some of the wildest comments made about Sanders, the Vermont independent senator, on Fox News and other cable TV news channels as he wins the support of younger voters.

"It's not just Bernie's personality the younger voters like, it's also his political philosophy," Meyers said.

He pointed to polls showing 58 percent of younger voters saw socialism as the most compassionate economic system, edging out capitalism -- and Meyers said that had put conservatives in panic mode.

"When did socialism go from scary to chic?" asked one broadcaster, while another plaintively wondered: "What the heck is going on?"

Lou Dobbs, on Fox Business Channel, got so carried away listing things he believed Sanders wanted to give away for free that he started making things up.

"That's right -- free cars," Meyers said, mocking Dobbs' claims. "But the question is, what kind of free cars can we expect from a Sanders administration?"

He played a clip of Sanders talking about his own car, which he identified only as "a small Chevrolet -- one of the smallest Chevys that they make" -- and Meyers imagined the senator riding around in some sort of modified scooter with car doors.

Some conservative broadcasters even freaked out about Sanders' "freaky" appearance -- including one Fox Business Channel guest who Meyers said "looks like he ate Tony Danza."

Bill O'Reilly said he would flee a Sanders presidency by moving to Ireland -- which, Meyers pointed out, already had implemented some of the senator's proposals.

"I hate to break it to you, Bill -- but if you think Ireland will be an oasis from the Bernie Sanders socialist nightmare, you're in for a shock, because in Ireland, students pay no tuition at Irish colleges and universities," Meyers said.

"And when hearing that gives you a heart attack," Meyers continued, "don't worry -- because it Ireland everyone is entitled to free basic health care."

Conservatives warned that Sanders would "tax the heck out of everyone," but Meyers said the top Republican candidates would slash government spending and give even more tax breaks to the wealthiest 0.1 percent.

"(Ted) Cruz's plan might as well be called the 'add more gold to Donald Trump's penthouse plan,'" Meyers said, showing a photo of the GOP candidate's ostentatious gilded residence. "That's actually where Donald Trump lives -- he surrounds himself with gold. He's like the dragon from the 'Hobbit' movies."

Trump and Sanders both appear to be eager to face one another in the general presidential election, and each candidate has boasted they would easily defeat the other.

"Trump talks about running against Bernie Sanders the way my aunt talks about a rich dessert," Meyers said.

However, recent polls suggest Sanders would beat Trump by more than Hillary Clinton would.

"Honestly, watching them run against each other would be worth it just for the fit Trump would throw if he lost to Bernie," Meyers said. "I mean, Trump has a private jet with his name on it -- Bernie doesn't even know the type of car he owns, he just knows it's the smallest one."