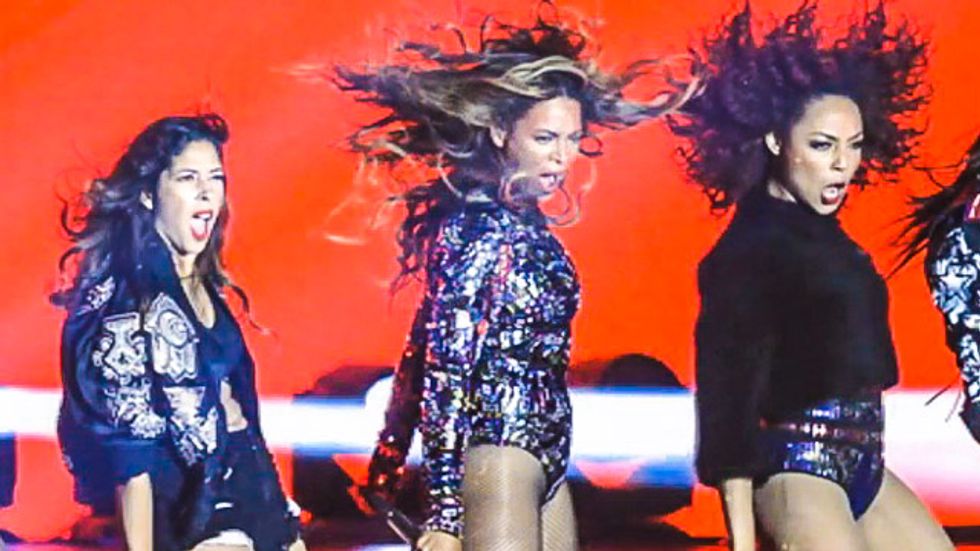 A Tennessee sheriff drew a connection between attacks on law enforcement officers and Beyoncé’s Super Bowl performance during a press conference Tuesday.

The sheriff, Robert Arnold, said he was talking on the phone Monday night in Murfreesboro when he heard a series of gunshots fired outside his house. He told reporters he immediately fell to the ground.

“We all know that as soon as you put on this uniform every day, you’re a target,” he said.

The sheriff noted that several law enforcement officials have been killed since the Super Bowl on 7 February, and he drew a connection to Beyoncé’s new music video, Formation, which included footage of a black child confronting heavily armed police officers, and the slogan “Stop shooting us”.

“With everything that’s happened since the Super Bowl and with law enforcement as a whole, I mean, I think we’ve lost five to seven officers, five deputy sheriffs, since Sunday’s Super Bowl, you know?” Arnold said in a video of the press conference posted by the Tennesseean newspaper. “That’s what I’m thinking: here’s another target on law enforcement.”

Asked to clarify his comment about the Super Bowl, the sheriff pointed to Beyoncé.

“Well, you had Beyoncé’s video, and how that’s kind of bled over into other things it seems like, about law enforcement,” Arnold said.

In a brief phone conversation, Megan Arnold, the sheriff’s wife, said his remarks had been taken out of context.

Arnold said she had recently watched the Beyoncé video but declined to comment on what she thought of it.

In an e-mailed statement, Arnold did not back away from his comments but said that they were not “meant to offend anyone”.

Seven law enforcement officers have been killed since 7 February, six of them by gunfire, according to the Officer Down Memorial Page . Two were deputy sheriffs in Maryland killed by a “wanted subject”. Another was a deputy sheriff in Colorado shot by a juvenile.

“My comments reflect the violence and senseless killing of seven deputies in the US since the show aired,” Arnold’s statement read. “My comments are an observation of the violence that has occurred but in no way is meant to offend anyone.”

Arnold’s spokeswoman, Lisa Marchesoni, wrote that his comments specifically “referred to the Super Bowl half-time show” and that his comments “relied on” a previous statement from the National Sheriffs’ Association.

In that statement, the association criticized the Super Bowl’s “anti-police ‘entertainment’” but did not mention Beyoncé’s name.

“The senseless killing of four law enforcement officers just this week – on the heels of the anti-police ‘entertainment’ at the Sunday Super Bowl halftime show – reminds us that the men and women in law enforcement take a solemn oath that includes putting their lives on the line every day to protect our citizens,” the association wrote on its website.

The organization had asked supporters to wear blue last Friday, 12 February, to honor the officers who had been killed. “Recent anti-LEO rhetoric, like the Super Bowl 50 half time show, MUST STOP!” the association said in a e-mailed graphic shared by Marchesoni.

Formation, Beyoncé’s new song, has been hailed as a celebration of black southern culture , as well as a forceful protest against police killings and government neglect of black Americans.

Related: How activists got a Black Lives Matter sign into the hands of Beyoncé's dancers

In one of the most striking images from the Formation music video, Beyoncé sits on the roof of a New Orleans police car in the middle of a flooded neighborhood. The car slowly sinks under water.

When Beyoncé performed her new song at the Super Bowl, her dancers wore berets, a tribute to the Black Panthers , and formed an X, an homage to Malcolm X. Her dancers were also photographed with a “Justice 4 Mario Woods” sign , a reference to a man killed by police in San Francisco.

Beyoncé’s video and Super Bowl performance sparked intense celebration and conversation, including some criticism from politicians and law enforcement groups.

“I thought it was really outrageous that she used it as a platform to attack police officers who are the people who protect her and protect us, and keep us alive,” former New York City mayor Rudy Giuliani said, according to the New York Daily News . “What we should be doing in the African American community, and all communities, is build up respect for police officers.”

Arnold, the Tennessee sheriff, has worked in the Rutherford County sheriff’s office since 1999, according to his official biography , and he was elected sheriff in August 2010.

Last spring, state and federal investigators executed a search warrant on Arnold’s home and office as part of an “ongoing investigation into possible public corruption”, the News Journal reported . Over the past year, the newspaper has run an in-depth investigation of the sheriff. Federal and state investigations are ongoing , an FBI spokesman told the Daily Beast.