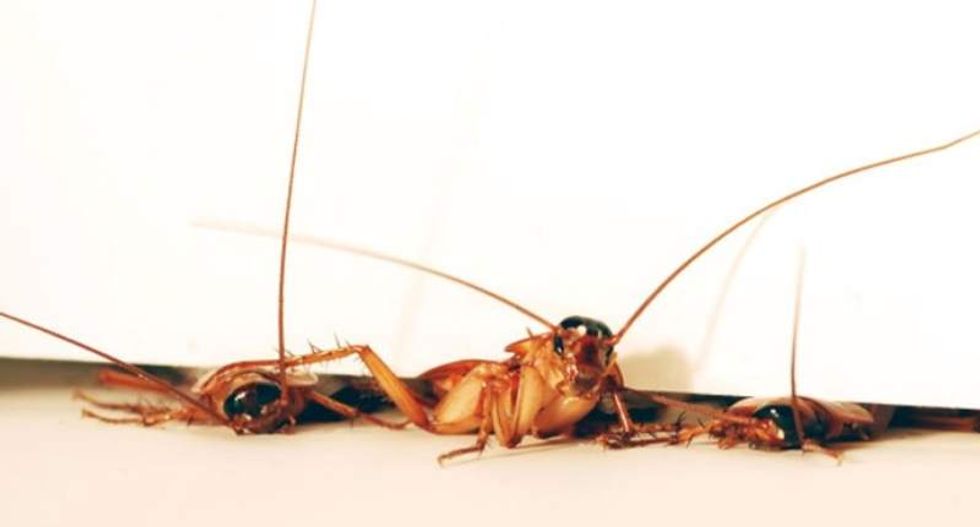 Three cockroaches squeeze though a 3mm crevice under a room door at different stages of traversal, in this undated handout photo courtesy of PolyPEDAL Lab, UC Berkeley. (Reuters/Tom Libby)

People use a lot of words to describe the reviled cockroach: disgusting, ugly, sneaky and repulsive, to name a few. But it may be time to add a surprising new one: inspirational.

Scientists said on Monday they have built a small search-and-rescue robot, inspired by the ability of cockroaches to squeeze through tiny crevices, designed to navigate through rubble to find survivors after natural disasters or bombings.

"We feel strongly that cockroaches are one of nature's most revolting animals, but they can teach us important design principles," University of California, Berkeley integrative biology professor Robert Full said.

Using a specially built obstacle course, the researchers observed how cockroaches scurried in less than a second through crevices smaller than a quarter of their height by compressing their jointed exoskeletons in half.

Once inside the crevice, the cockroaches managed to move rapidly, at nearly 20 body lengths per second, with their legs splayed completely out to their sides.

"If you scale it up to the size of a human, it would be equivalent to about 70 miles per hour (113 kph), over twice the speed of the fastest sprinter," said Harvard University biologist Kaushik Jayaram, who worked on the research while at UC-Berkeley.

The researchers said the cockroaches were about a half inch (13 mm) tall when they ran freely, but compressed their bodies to about a 10th of an inch (2.5 mm) to get through cracks.

Experts have been studying animal locomotion in order to invent robots that can maneuver in tough environments. For example, sidewinder rattlesnakes inspired a serpentine robot.

"Nature has a library of design ideas. This diversity enables discovery. You never know where basic research will lead. The most important discoveries are often from the most unexpected creatures, some of which are disgusting," Full added.

The observations involving the species Periplaneta americana, the American cockroach, inspired the design of a prototype soft-bodied, multi-legged robot called CRAM (Compressible Robot with Articulated Mechanisms) that in the future could be used in swarms to help locate survivors in collapsed structures.

The simple and inexpensive robot, 7 inches (18 cm) long, 3 inches (7.6 cm) tall and weighing 1.6 ounces (46 grams), was constructed using an origami-like manufacturing technique, Jayaram said. It can reorient its legs and compress its body like a cockroach to get through "vertically confined spaces," Jayaram added.

The research was published in the journal Proceedings of the National Academy of Sciences.