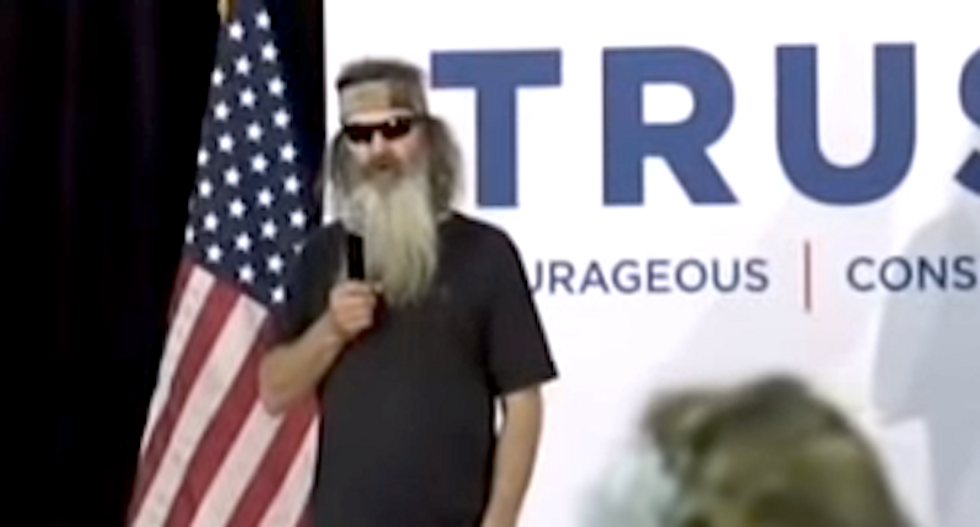 “It is evil, it’s wicked, it’s sinful and they want us to swallow it," Robertson told the crowd in Council Bluffs.

“We have to run this bunch out of Washington D.C.,” Robertson continued. “We have to rid the earth of them. Get them out of there.”

Robertson said Cruz was a "godly" politician who could cure what he believes is a "spiritual problem" in Washington, D.C.

"When a fellow like me looks at the landscape and sees the depravity, the perversion -- redefining marriage and telling us that marriage is not between a man and a woman? Come on Iowa!" Robertson said, drawing cheers from the crowd. "It is nonsense."

"How about Phil Robertson, what an extraordinary human being," Cruz said. "I mean, listen, God makes every one of us unique, but some are uniquer than others. What a voice Phil has to speak out for the love of Jesus. What a joyful, cheerful, unapologetic voice of truth Phil Robertson is."

Robertson also described Cruz, who is polling second to Donald Trump in Iowa in the hours before Monday's caucuses, as a "strict constitutionalist" who "loves James Madison."

The conservative TV star explained his comments about Madison later Sunday in an interview with Fox News, where he shared a phony quote to claim the Founding Father was an evangelical Christian like himself.

He claimed Madison had written that the U.S. was based “on the capacity of each of ourselves to govern ourselves, to control ourselves, to sustain ourselves based on the Ten Commandments of God.”

However, as the website Snopes reported, historians have found no evidence that the fourth president had ever made such a statement.

"The idea is inconsistent with everything we know about Madison's views on religion and government, views which he expressed time and time again in public and in private," said the curators of the Madison Papers at the University of Virginia in a 2013 response to a question from Americans United for Separation of Church and State.