This is what actually happened at the US consulate in Benghazi 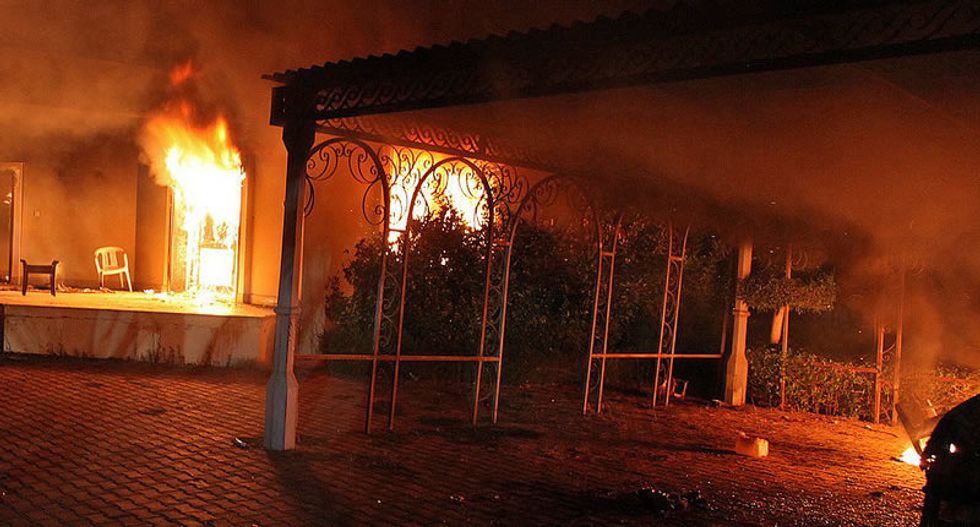 Films can be used as powerful political weapons – and director Michael Bay’s latest film, 13 Hours: The Secret Soldiers of Benghazi, is a case in point. Dramatising the deadly 2012 attack on the US consulate in Benghazi, Libya, it has been trumpeted by right-wingers as an assault on Democratic presidential hopeful, Hillary Clinton, who was secretary of state at the time. Donald Trump has even organised free screenings for his supporters.

Certainly the attacks that took place in Benghazi on the evening of September 11 2012 and into the next morning have been mired in controversy. US Ambassador Chris Stevens and computer expert Sean Smith died in the first attack and two former Navy Seals, Tyrone Woods and Glen Doherty, were killed in the second attack. It was the first time that an American ambassador had been killed since 1979.

Many critics of the Obama administration expressed outrage about the inability of the US State Department to protect its own diplomats and its poor response to the attack. Critics of the State Department and Obama administration claimed that it took over three weeks for the FBI to travel to the Benghazi consulate site, which made it more difficult to investigate. It also took a long time before any suspects were arrested or identified. Ahmed Abu Khattala, the first militant to be arrested was not apprehended until June of 2014.

Supporters of the Obama administration, meanwhile, were irritated by the Republican-led follow-up investigation, which aimed to uncover the missteps, produced a critical 46-page report – and has cost US taxpayers a reported $4.7 million.

But what really happened on the night in question?

Was the compound secure?

Former Secretary of State Hillary Clinton testified in 2015 on the attack to the House Select Committee on Benghazi. She has also acknowledged that a “systemic breakdown” did take place.

Many have noted that the compound did not meet security specifications because it was only a provisional base. Ambassador Stevens was normally based at the US embassy in Tripoli but was visiting the US Special Mission in Benghazi for a week, where an ad hoc consulate had been set up due to the ongoing conflict.

This made the facility particularly vulnerable. It was also found that the US Department of State did not adequately support security requests from its own security personnel in Benghazi, nor did it have any specific intelligence of an imminent attack. Consequently, the unarmed Libyan guards were unable to stop the attackers' trucks entering the compound.

How was the ambassador killed?

Controversy revolves around efforts by the US security team to protect the ambassador. Multiple sources claimed that Stevens, security agent Scott Strickland and computer expert, Sean Smith were forced to a safe haven during the assault, which began around 9.40pm.

After a fire was started by the terrorists, however, the group lost track of one another with Strickland exiting through a window. Strickland claimed that he tried several times to find the other two but was unable to because of the smoke. He then went up to the roof to communicate with the other agents.

Agents later returned to the main building and found Smith’s body, but not Stevens'. It was eventually discovered that Stevens had died at a hospital in Benghazi. Reportedly, Libyan bystanders found him and took him to the hospital where attempts were made to revive him. According to Associated Press, he had died of asphyxia, likely caused by smoke inhalation.

The second attack was launched at around 4am, when mortars were fired at the CIA complex. It was during this that Glen Doherty and Tyrone Woods were killed.

What is known is that militants arrived in trucks bearing the logo of Ansar al-Sharia, a group of Islamists who were working with the local government to provide security. The assailants were armed with grenades, AK-47s, other assault weapons and canisters of diesel. The US eventually alleged that two Libyan branches of Ansar al-Sharia – Derna and Benghazi – and another branch in Tunisia were involved in the attacks.

Though al-Qaeda’s leader Ayman Zawahiri praised the attackers in a congratulatory video, the group never took credit for the attack. However, Al Qaeda in the Islamic Mahgreb commander, Mokhtar Belmokhtar was later linked to it, too.

Some of the assailants also have been identified as associates of Muhammad Jamal, who led an Egyptian terrorist group, the Muhammad Jamal network (MJN). Some of the Benghazi attackers reportedly trained at MJN camps in Libya. Though the core of Al Qaeda did not coordinate this attack, it demonstrates how lesser but potentially violent groups have been able to stage their own attacks. This exponential explosion of violent groups with links to Al Qaeda of varying strength makes it more difficult to assign definitive responsibility.

The US first claimed that the attacks were launched in response to the release of the controversial video Innocence of Muslims, an anti-Muslim film which sparked wider protests. The administration mistakenly claimed that it was such protests that led to the more violent compound attack, apparently to avoid framing the attack as an act of terrorism. But Libyans interviewed countered that there were no such protests.

Though the assault wasn’t particularly sophisticated and didn’t require years of planning, the attackers had trained with one another and had clear orders. They also had been given excellent intelligence, knowing how to get from different access points in the ambassador’s residence and how to cut off the security agents and the local guard force.

So the Benghazi attack did represent a serious lapse in security and intelligence, as well as a misunderstanding of the changing terrorist networks in the region. But it was far from a unique incident. Between 1998 and 2011 there were 13 deadly attacks on US diplomatic facilities, and seven US ambassadors have been killed while on the job since 1950. Many more attempted attacks and plots thankfully have been thwarted.

Ultimately, the biggest lesson is that the region is incredibly unstable and dangerous with almost 1,100 terrorist attacks taking place in Libya since the fall of the Qaddafi regime. Questions certainly remain, but while the right uses the attack as proof of Clinton’s incompetence, it is actually more surprising that there have not been more US fatalities.