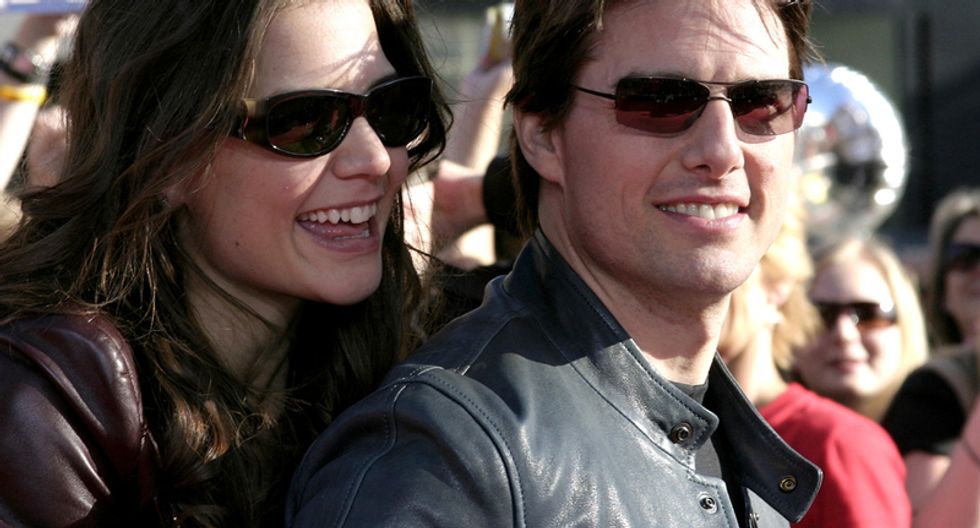 Katie Holmes spent seven years trapped in a marriage with Tom Cruise who has reached master levels in the Church of Scientology. The Los Angeles-based "religion" is known for recruiting new members of their flock from Hollywood. Most recently Leah Remini came out about her experience as a part of Scientology and her attempts to escape. Holmes made news when she publicly apologized to Remini and Tom Cruise allegedly "freaked out."

Well, things are about to get a heck of a lot worse for Scientology at the hand of Holmes, or perhaps the middle-finger of Holmes. Her latest indie film "Touched With Fire," is one big endorsement of psychology, which Scientology is known for opposing. According to the film site IMDB, the movie is about two manic depressive poets (Holmes and actor Luke Kirby) who "meet in a psychiatric hospital and begin a romance that brings out all of the beauty and horror of their condition."

In an interview last week on the "Today Show," Matt Lauer asked Holmes if the film was pro-medication since the film seems to show two people who function better when on their meds. "It also asks the question: is it beneficial to treat these people with drugs," Lauer began. "And you and I both remember a heated discussion I got into on that subject in this very studio," he said referencing a 2005 interview with Tom Cruise. The actor railed against psychology to Lauer when talking about Brook Shields who revealed she was taking anti-depressants for post-partum depression. Cruise claimed to be an expert in the history of psychology in an interview with Matt Lauer on the "Today Show."

L. Ron Hubbard, the founder of Scientology hated psychologists. After he convinced his second wife, Sara, to marry him and she had Hubbard's third child, she found out he was still married to his first wife. The divorce papers filed by Sara Hubbard outlined years of emotional and mental abuse. Psychologists at the time said that Mr. Hubbard was "hopelessly insane" and encouraged that he be committed to a psychiatric hospital. It's unclear if that was the source of Hubbard's hate for the science, but it certainly didn't help.

Scientology's biggest critic in news has been the St. Petersburg Times, which has done  extensive reporting and interviews with Scientology defectors. Their profiles paint a very different portrait of Scientology chair David Miscavige than the followers do. Gawker outright headlined Miscavage as a "scary, insane psychopath" when reporting an exchange between him and the Times. In a 1992 interview with ABC News, Miscavige explained Scientology's war against psychology as tool to help people,

"But let me tell you what our real problem is. Number one, understand this. Psychiatry, psychology, that comes from the word psyche. Psyche means soul. These people have preempted the field of religion, not just Scientology, every other religion. They right now practice and preach the fact that man is an animal, and I guess that is where philosophically we're at odds with them. But to understand what this war is, this is not something that we started."

As you can see in the trailer below, Holmes' character concerns her family when she has a series of manic episodes and ultimately checks herself into a psych ward. Eventually, she meets Marco who is in a similar boat. They fall in love and like many who feel better once on their meds, they go off their meds assuming they're cured. Holmes told Lauer that the film leaves it to the audience to decide for themselves if medication can help those who might need it, but it's pretty obvious. It's not surprising that Holmes chose her first major film returning to the big screen to be a private FU to Scientology. After enduring seven years and years of subsequent fallout, she was bound to do something.

The film debuted at South by Southwest in 2015, but the film was released in theaters February 12th.