Ultimate Bernie bro: Meet the Hillary-hating Rand fan who felt 'the Bern' and fell in love 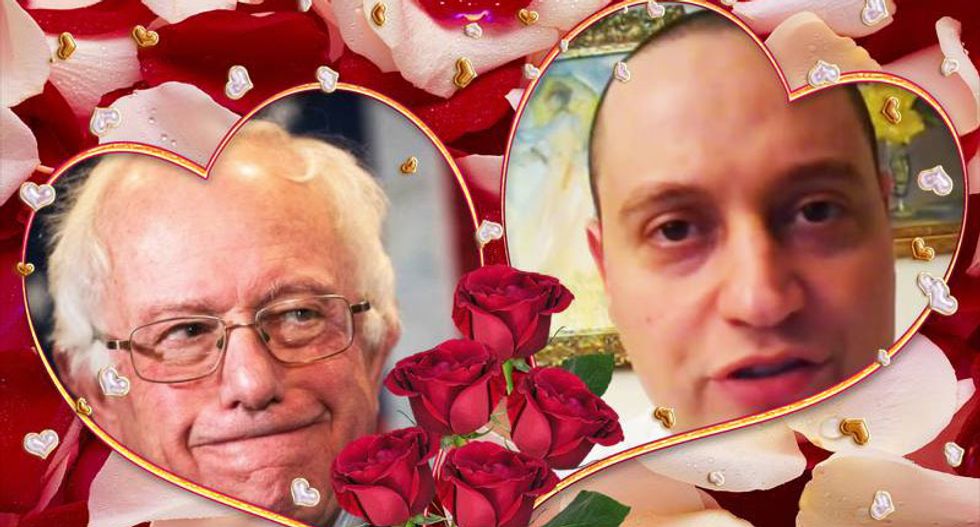 Yes, Virginia, there is a "Bernie bro."

Well, at least one that we can definitely put our finger on.

If you have have never encountered a Bernie bro -- well, then you have probably never been in the fever swamps known as "comment sections," which generally have the soothing ambiance of a a psych ward that ran out of meds two days prior.

Some are quite open about their relationship with the Bernster, slapping their names onto big sloppy Internet wet soul kisses.

Let's review his handiwork and see if you notice any sort of common theme that runs through it besides his dogged insistence that he is gonna vote for Sanders so goddamn hard he'll probably make a Bernie baby.

Oh, that last one was written the day Bernie announced -- so he must have had an early deadline.

And that was just at Salon.

Let's not forget H.A.'s efforts at The Huffington Post, where -- granted -- a few of the same columns show up with variations on a theme:

It is quite obvious that H.A. is quite taken with the fetchingly self-described "Democratic Socialist" Sanders, who wants to expand the social safety net, provide free college tuition, allow everyone to enroll in Medicare and who wants to put people before profits.

And since Goodman describes himself as "liberal Democrat," it's not hard to see why. It seems like a match made in BernieSingles.com heaven, where it modestly states: "Meet other people who understand the world."

But love can be fickle.

Prior to Sanders jumping into the ring, H.A. was madly in love with libertarian government-hating, social services-slashing Republican Sen. Rand Paul.

In fact it was only two weeks before his heart belonged to Bernie that he wrote: "I'm a Liberal Democrat. I'm Voting for Rand Paul in 2016. Here Is Why."

Sure Rand thinks giving people food stamps is just like "slavery." And it may be true that Paul wants to give the Pentagon an extra $76 billion to make ends meet. And there was that time when Rand Paul said he would like to “repeal all of Obamacare.” Oh, remember when he was still running for president and he wanted to replace the 35 percent corporate tax with a 14.5 percent flat tax because cutting taxes on businesses and the rich creates jobs? That was so --- Berniesque.

But "Don't let perfect be the enemy of good," because only Bernie can "defeat the GOP." Or Rand Paul.

Hearts and vows are made to be broken...