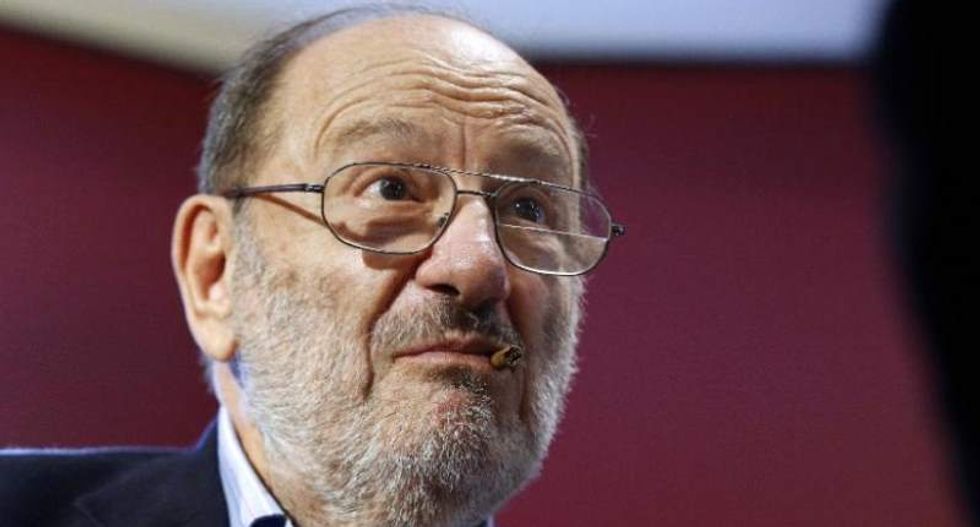 Amid the sadness following the death of Umberto Eco, it is dispiriting to find that so many obituary writers are not clear on what he actually did.

Certainly Eco is recognised as a major novelist, despite his subsequent novels never matching the success of his first, The Name of the Rose. He has also been feted as a philosopher, a historian and one of a dying breed of public intellectuals. Yet it is his underpinning role as a professor of semiotics that has proved most troublesome for the popular press to assess.

The problem is that many are not quite sure what semiotics is. The New York Times obituary refers to it as an “arcane field”. The Scotsman refers to “the esoteric theory of semiotics”, while The Washington Post has it that semiotics is “the study of signs, symbols and hidden messages” which, when coupled with the reporting of Eco’s specialism in the history of the Middle Ages, makes him seem like a character in a Dan Brown novel.

The Guardian does no better, disdainfully suggesting that semiotics is “an abstruse branch of literary theory”, the exact phrase that is used in the obituary in The Telegraph. The Independent marks a slight improvement, with semiotics as “the study of signs and meaning in communications”. The BBC, for reasons which can only be guessed at, does not even mention semiotics, noting only that Eco was professor emeritus at the University of Bologna.

They may not know what semiotics is, but many are quick to condemn it.

The Telegraph is predictably swift in pouring scorn on Eco as such an influential left-of-centre voice, referring further to semiotics as according “world-historical significance to trivia” and dubbing Eco as “a sort of portmanteau intellectual, giving his views on everything from how to eat peas with a plastic fork to changing concepts of beauty”.

Far from according world-historical significance to trivia, semiotics has consistently led the way in eradicating subjective value judgements from all cultural artefacts, including those which have been said to have been born with, achieved or had greatness thrust upon them. Semiotics, as Eco formulated it, is a matter of understanding how sign systems work.

One of the key concepts of semiotics, invented concurrently by Roland Barthes and Juri Lotman in the early 1960s, is “the text”. Rather than a “work”, which indicates some higher purpose of an authorial genius, “the text” indicates a fabric of devices designed through habitual use of signs to reach a particular audience. Any collection of signs is a text. The concept was in the vanguard of the dismantling of the imaginary dividing line between so-called “high” and popular culture.

For those with a vested interest in high culture, the abolition of the great divide still rankles. The Telegraph derides Eco’s novels for being too difficult while lamenting the “infection” resulting from his democratisation of the process of interpretation. It’s the classic bourgeois demand that culture be reserved for an elite but without requiring too much effort from them to enjoy it. The alternative to such philistinism in the face of closed cultural divides seems to have been the middle-class colonisation of popular culture in the post-Hornby romance with football, for example, or with the ubiquity of Coldplay on BBC executives’ iPhones.

But, in drawing attention to sign systems, semiotics does not simply represent a mission to abolish cultural hierarchies. It has much bigger fish to fry. This makes its vision difficult to pin down and to sum up. So, just to be clear, what is semiotics?

Well, among other things, it’s “the theory of semiosis (the action of signs)”. But latterly it has evolved into the study of the “objective world” that is constructed by all species out of their own signs. This comprises the signification of all living things.

Eco tracked the definition of semiotics by reference to the shelving of semiotics books in a Harvard bookshop. First, they were in linguistics; then, in cultural studies; by 1999, when he addressed the International Association for Semiotic Studies in Dresden, the books were filed under “cognitive science” – although he did worry that, the next time he looked, they would be under “New Age”.

But while this worry might only be relevant in the context of some hapless obituarists, a greater concern occupied Eco in his final years. That concern, expressed in his “Letter to my grandson” was that people are losing their memory. The availability of the internet, he explains, could entail that people cease to engage in mnemonics to store their knowledge and memories in their brains. So he exhorts his grandson to try to remember football teams from different eras; those aboard La Hispaniola when it went in search of Treasure Island; the names of the servants of the Three Musketeers and d’Artagnan; who the Hittites and Camisards were; the names of Columbus’ three ships; when the dinosaurs became extinct; whether there was a steering wheel on Noah’s ark, and so on.

His advice foreshadows the interdisciplinary breadth of vision that semiotics demands. It also offers a strong sense of semiotics’ contemporary bearing – not just as a thorn in the side of elitists but as a key to understanding the relation of culture and cognition.