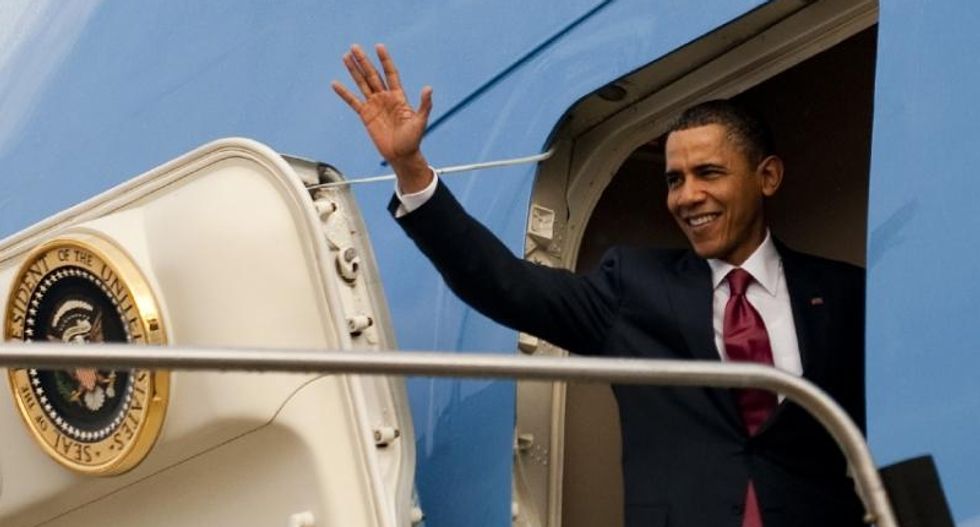 Air Force One costs about $180,000 an hour to fly and provides the president with a spacious office, a meeting room and a health center that can even be converted into an operating theater (AFP Photo/Jim Watson)

Air force officials and Boeing engineers have started the years-long process of replacing Air Force One, the legendary aircraft that whisks the American president and his entourage around the world.

The Pentagon last week approved the first of a series of contracts with Boeing, the US aerospace giant chosen to convert a pair of its 747-8 jumbo jets -- there are actually two Air Force Ones -- into state-of-the-art, luxury command centers.

That first contract, worth a relatively small $25.7 million, is for Boeing to look for cost savings and get a better sense of the scope of the massive task at hand, the Air Force said.

Air Force One is an instantly recognizable emblem of American power.

The majestic, light blue-and-white liveried jets have "United States of America" emblazoned along their fuselage and a large US flag stamped on the tail fin.

But the current double-decker 747-200s, first ordered by Ronald Reagan and put into service in 1990, are getting old.

Spare parts are increasingly hard to source and the hulking aircraft require ever longer times being serviced.

The Air Force in January last year announced it had chosen Boeing to build the new planes, but equipping the wide-bodied double-deckers for the role is a complex undertaking.

The total cost of buying and converting the two planes is unknown, but the Air Force has requested $3 billion over five years for the program. The work should be done by 2024.

"We are focused on ensuring this program is affordable," said Colonel Amy McCain, the manager of the Presidential Aircraft Recapitalization program.

"This contract gets us started on determining how to modify a 747-8 to become the next Air Force One, and finding opportunities for cost reduction through detailed requirements choices."

The new planes will doubtless be very different from the current Air Force One incarnation, though the Air Force has yet to say much about its specifications.

Air Force One costs about $180,000 an hour to fly and provides the president with a spacious office, a meeting room and a health center that can even be converted into an operating theater.

The planes must also carry the Secret Service agents who protect the president, as well as advisers and journalists that follow him wherever he goes. The kitchens can serve up to 100 people simultaneously.

Air Force One is equipped with the latest in communications technology, allowing the president to continue working wherever he is, even if the United States is under attack.

The aircraft also boasts an array of defensive technologies, including electronic countermeasures and anti-missile flares.

And it can be refueled while still flying, enabling it to stay airborne for days at a time.

The new planes will have super-powerful engines that will let the planes nudge the sound barrier at Mach 0.92, faster than the current 747-200s.

There will not, however, be an escape pod like the one depicted in the 1997 hijacker movie "Air Force One" featuring Harrison Ford as president.

A project to replace the Marine One helicopters that ferry the president proves a cautionary tale.

In 2009, Barack Obama stopped the development and purchase of 28 new choppers ordered in 2005, after costs soared to nearly $11.5 billion.

Among the many design specifications Obama balked at were built-in cooking facilities that could withstand a nuclear strike.

"If the United States of America is under nuclear attack, the last thing on my mind will be whipping up a snack," Obama later quipped.

Obama has also said that the perk he will miss the most when his term expires will be Air Force One.

"An amazing plane with an amazing crew, they clear out airspace so you don't have to wait. And you land anytime, you leave anytime," he told GQ magazine in November.

There’s a lot to be worried about in the draft U.S. Supreme Court opinion that would overturn Roe v. Wade — and with it, half a century of constitutional precedent.

At least 26 states are likely to criminalize abortions, often without exceptions for rape, incest, or life-threatening pregnancies. In Louisiana, people seeking abortions could even face execution, which doesn’t strike me as particularly pro-life.