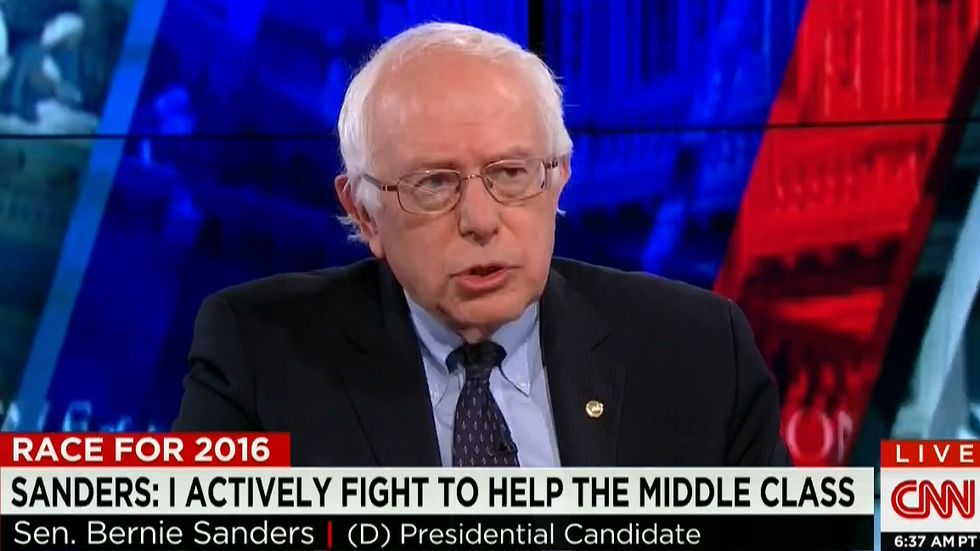 Sen. Bernie Sanders (I-VT) laid out how his faith intersects with his progressive beliefs during Wednesday's Democratic Party town hall.

Sanders' remarks came in response to a question from CNN host Anderson Cooper.

"You're Jewish, but you've said that you're not actively involved with organized religion," Cooper said. "What do you say to a voter out there who says— and that who sees faith as a guiding principle in their lives, and wants it to be a guiding principle for this country?"

"It's a guiding principle in my life, absolutely, it is," Sanders began. He explained that everyone practices their faith differently and acknowledged that he wouldn't be running if he didn't have a strong religious and spiritual understanding, then continued.

"I believe that, as a human being, the pain that one person feels, if we have children who are hungry in America, if we have elderly people who can't afford their prescription drugs, you know what, that impacts you, that impacts me," the senator said. "And I worry very much about a society where some people spiritually say, it doesn't matter to me, I got it, I don't care about other people. So my spirituality is that we are all in this together and that when children go hungry, when veterans sleep out on the street, it impacts me. That's my very strong spiritual feeling."

Later in the event, former Secretary of State Hillary Clinton spoke about her faith and service in response to a question concerning ambition and humility.

Clinton began by saying she was fortunate to have her faith to fall back on and that she has had to struggle with many of these issues such as "ambition and humility, about service and self-gratification." She said, however that it is incumbent upon those in the public arena to be "as self-conscious as possible."

She also acknowledged that it isn't easy to talk about herself rather than stories she hears from people she meets at events to convey the things she cares about and that touch her personally.

"I have had to come to grips with how much more difficult it often is for me to talk about myself than to talk about what I want to do for other people...So I'm constantly trying to balance how do I assume the mantle of a position as essentially august as president of the United States not lose track of who I am, what I believe in and what I want to do to serve? I have that dialogue at least, you know, once a day in some setting or another. And I don't know that there is any ever absolute answer, like, OK, universe, here I am, watch me roar or oh, my gosh, I can't do it, it's just overwhelming, I have to retreat."

She touted her relationship with faith advisors who often email her scripture or passages they plan to teach in their services and that it has helped her stay grounded. Clinton also discussed the difficulties that she experienced in a very public way, perhaps a reference to her husband's past indiscretions. She cited the prodigal son parable in the Bible saying that it reminded her to be grateful.

"Everybody knows I have lived a very public life for the last 25 or so years. And so I've had to be in public dealing with some very difficult issues and personal issues, political, public issues," she said, before citing a treatment of the prodigal son parable by Dutch Catholic priest Henri Nouwen.

"I read that parable and there was a line in it that became just a lifeline for me. And it basically is practice the discipline of gratitude," she said. "So regardless of how hard the days are, how difficult the decisions are, be grateful. Be grateful for being a human being, being part of the universe."