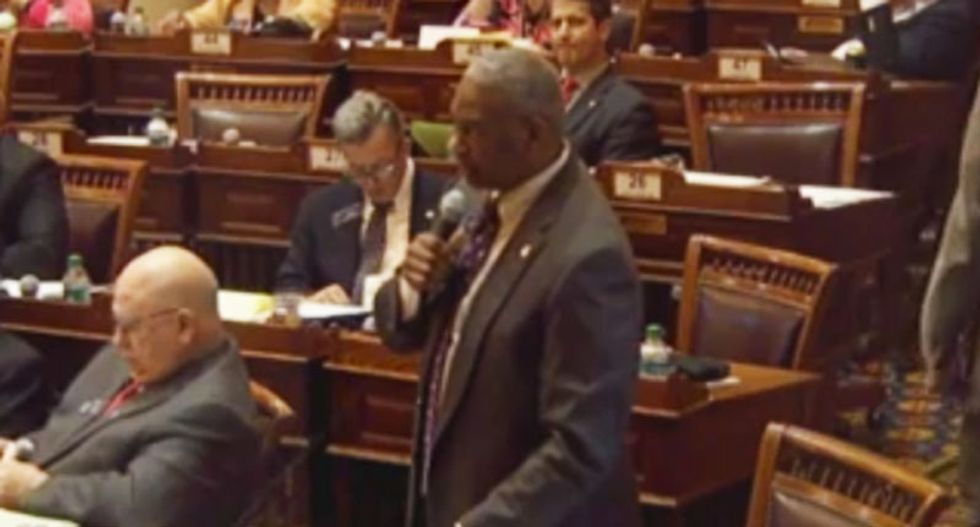 Prior to the Georgia State Senate passing a "religious freedom" bill designed to offer protections to people who oppose same-sex marriage, a black lawmaker was stunned when one of the authors behind the bill blithely dismissed the fact that it would also protect the Ku Klux Klan.

The Georgia First Amendment Defense Act was sponsored by GOP Sen. Greg Kirk, who was asked on the floor of the senate by black State Senator Emanuel Jones, if he understood the implications of the bill he authored.

"Some of my heritage have done a lot more than just read about them," Jones bluntly stated. "My concern is, couldn't that organization -- if they chose to do --  so identify themselves as 'faith based'?," Jones asked, referring to the hate group which has a history of calling itself faith-based.

Stating that he was "not an attorney," Kirk conceded, "I guess they could, Senator," before adding, "I'm not sure."

"So there's nothing in your legislation that would stop them, is that correct?" Jones pressed.

"Does that present a problem for you, Senator?," Jones continued.

Kirk paused before conceding, "No."

Continuing to ramble, Kirk bizarrely used the dancers accompanying singer Beyonce at the Super Bowl to point out that the Black Panthers would also be protected.

"I guess that'd be kind of a similar group that we're talking about, and I guess they could fall under this as well," he explained.

Watch the video below, uploaded to YouTube by Georgia Equality: